China’s Foreign Policy and its Impact on Sino-Indian Relations 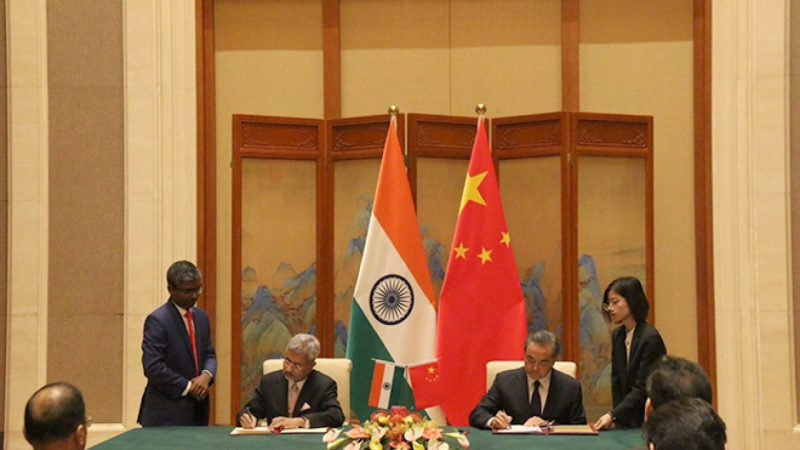 The two Asian Giants have experienced a nadir in ties since the Galwan episode along the borders of Ladakh last year in June. The casualties in the clash were the first in the disputed Sino-Indian border since 1975. Back in 1979, when the relations were strained between India and China, it was the confidence and willingness of the then foreign minister of Janata Government, Atal Bihari Vajpayee, who broke the ice and melted away the uneasiness in the Sino-Indian relations that were frozen since the humiliating war experience of 1962. However, in 2021, despite the talks at military and diplomatic levels, and coming to the agreement of de-escalation and disengagement at the borders, there is a strong need to know as to what kind of layered approach will the policymakers take up while discerning the political solution to the “Chinese Question”.

Critical Political Economy (CPE) is a dynamic perspective that focuses on the interaction between the Geo-political and Geo-economic aspects in Foreign Policy. It has divorced itself from the traditional mainstream theories like neo-realist or neo-liberal theories because the interplay between the exercise of political authority, national security, functions of production and consumption, and accumulation of wealth cannot be analyzed in isolation. In the post-cold war era, there has been a precedence of economic power over military power, however, the recent evolution and rise of authoritative leadership, rising protectionist policies, economic sanctions have challenged the liberal world order. Another important aspect of the Critical Political Economy approach is that it considers sovereignty as a dynamic concept subject to change and development. Therefore, CPE gives a developmental and a socio-economic perspective of foreign policy and it is through this lens that the Indo-China relations and their future trajectory of ties will be analyzed.

After the dissolution of the Soviet Union, India’s foreign policy took a U-turn and turned towards a pragmatic approach i.e neo-liberal economic policy. At present, China is following “wolf warrior diplomacy” and establishing its sphere of influence globally. However, at the domestic level, the question that arises is whether the capitalist class can gather social consensus, that is, is it taking into consideration the interests of poor masses in rural and urban areas. For instance, China is facing a trade-off between achieving the minimum wage level and standard of living among workers domestically and becoming the world player of exports internationally. Although in 2013, the Chinese Communist Party (CPC) led government did acknowledge the decisive role played by the markets in the allocation of resources. Gradually it meant that the “marketization” reform would lead to greater economic efficiency but at the cost of political control held by the party in China. The Economist did mention the emergence of “Regulatory Authoritarianism” in China. The Maoist proclamation of keeping ” Politics in command” is the key principle of the CPC-led government’s hold over Chinese lives.

The private sector comprises more than 50 percent of China’s GDP and accounts for 80 percent of the employment sector. 70 percent of the technological innovations are done by private players. To grapple with the problem of intrusion of the private sector in China’s economy, steps like the recent regulation of the internet industry, private education industry, etc have been taken. The government is also entering the private firms to blur the lines between the private and the government sector. Therefore Private sector is being viewed with a sceptical lens in China that has played a major role in exacerbating inequality and therefore undermining China’s socialist goals, although the macro-level goal being the political control of CPC over China.

Just like the Chinese government is making its presence in the private sector, akin to this, it is being intrusive along the lines of the LAC and Ladakh border. It has done major investments in building roads and highways in the Tibet region and following its assertive, bolder foreign policy by ignoring past doctrines and agreements. The border tensions have led to the spillover effects in the economic sphere on India’s side. India banning the Chinese firms of 5G trials has reduced its dependency in the telecom sector. Until 2020, China has been India’s largest trading partner worth 77 billion US dollars, and it is difficult to decouple the trade part although the investments can be halted.

The dynamics witnessed Geo-economically with a reduction in trade, which was once at an all-time high, was due to the recent cross-border tensions, which therefore displayed a perfect example of a security dilemma where one side’s action would be perceived as a threat by the other. However, the question that arises is, whether the regulatory bodies are flexible enough to reject the language of optimal regulation which has a static connotation.

The India-China relationship oscillates between global coordination and bilateral tensions. The consensus in the transnational issues like climate change, terrorism, cyber security, restructuring of financial institutions acts like antidotes to the bilateral differences. Although the increasing trust deficit is further increasing the bilateral rivalry. The trade dependency will only be reduced if India caters to the problems like supply-side bottlenecks, disengagement in sensitive sectors like telecom, and working towards its capacity building.

Just like China is acting like a cauldron in which war hysteria and xenophobia are being stirred up, akin to it, India too is experiencing internal communal unrest, inequality, low economic growth, etc. China remains India’s formidable opponent. China’s assertive and bold foreign policy is an attempt to reshape the contours of the region and the global balance of power. With the growing cross-border Sino-India frictions, the latent danger of war remains high as the two continue to aspire for ascendancy in the world system.

Respecting territories and sovereignty are highlighted as the basic principle in the theory of International Relations. Increasing connectivity through economic corridors should be encouraged but not at the cost of debt burdens. India discouraging China’s model of connectivity and at the same time dealing with the border tensions, have led to an impasse between the two Asian Giants.

The Chinese question can no longer be dealt with haste and cannot be expected to have quick results. Policymakers, despite societal constraints, need to devise policies and make decisions to establish an elaborate critique against the prevailing policies. The rounds of talks at both military and diplomatic levels had taken place and agreement on de-escalation and disengagement has been agreed upon. Setting up buffer zones has clearly eased up the situation however it’s difficult for both sides to cut the Gordian Knot, while disputes in Demchok and Depsang remain unresolved. Can India expect a leader like Atal Bihari Bajpayee, someone who thinks in terms of interaction and not action when it comes to dealing with the neighborhood dragon?