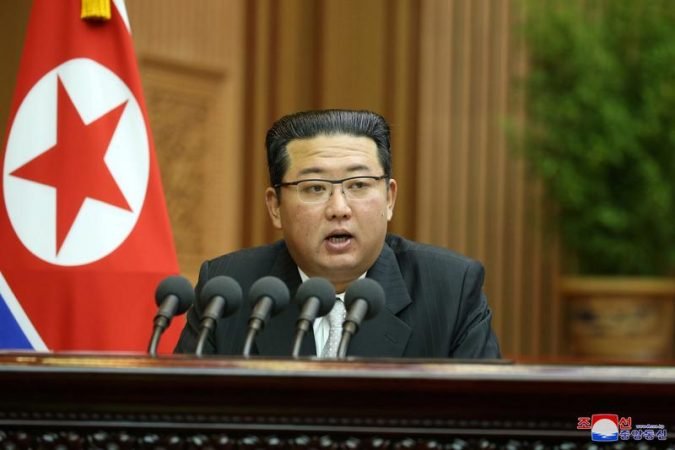 North Korean leader Kim Jong Un said he is willing to restore severed inter-Korean hotlines next month, but accused the United States of proposing talks without changing its “hostile policy” to the country, state media KCNA reported on Thursday.

Kim made the remarks at the reclusive country’s rubber-stamp parliament, the Supreme People’s Assembly, which gathered for a second day to discuss the government’s political, economic and social agenda.

Kim expressed his willingness to reconnect inter-Korean hotlines starting from October, but criticised the South’s “delusion” over what it calls military provocations from the North.

North Korea severed the hotlines in early August in protest against joint South Korea-U.S. military drills, just days after reopening them for the first time in a year.

The decision to reactivate the lines is to help “realise the expectations and desire of the entire Korean nation” for recovery and durable peace in cross-border relations, Kim said.

“We have neither aim nor reason to provoke South Korea and no idea to harm it,” he said, according to the official KCNA news agency.

South Korea’s Unification Ministry responsible for inter-Korean affairs welcomed Kim’s offer on the hotlines, but did not comment on his other remarks.

“The U.S. is touting ‘diplomatic engagement’ and ‘dialogue without preconditions’ but it is no more than a petty trick for deceiving the international community and hiding its hostile acts,” Kim said.

The Biden administration has said it reached out to Pyongyang to break an impasse over talks aimed at dismantling its nuclear and missile programmes in return for U.S. sanctions relief.

It has criticised North Korea’s recent missile launches as “destabilising” and “threats.”

The U.N. Security Council will meet behind closed-doors on Thursday over the North’s latest test following requests from the United States, Britain and France, diplomats said.

Analysts say the North’s carrot-and-stick approach is aimed at securing international recognition as a nuclear weapons state and driving a wedge between Seoul and Washington, taking advantage of South Korean President Moon Jae-in’s desire for a diplomatic legacy before his term ends in May.

“The North seems upset about the Biden administration having not made any concrete, tempting proposal to resume negotiations,” said Yang Moo-jin, a professor at the University of North Korean Studies in Seoul.

Pyongyang was attempting to foster a more positive mood towards North Korea in Seoul ahead of the upcoming presidential election and press Moon to help shift U.S. attitudes, he said.

Kim did not refer to the North’s recent missile tests, but touted “ultra-modern weapons which are being developed at an extremely fast speed” and capable of containing “hostile forces.”

He also said that in order to formally end the 1950-53 Korean War, as suggested by Moon at the recent U.N. General Assembly, both Koreas should withdraw “unfair and double-dealing attitude and hostile viewpoint and policies” toward each other.

KCNA separately reported that Kim Yo Jong, the leader’s powerful sister, was named as a new member of the State Affairs Commission, a top governing body created in 2016 and chaired by Kim Jong Un, as part of a personnel reshuffle unveiled on the sidelines of the parliament meeting.

Kim Yo Jong, 32, has risen rapidly since her brother took power in 2011, becoming a senior official at the ruling Workers’ Party handling propaganda and ideological messaging in 2014.

She has taken on a more diplomatic role, especially on inter-Korean affairs since she visited the South for the 2018 Winter Olympics.