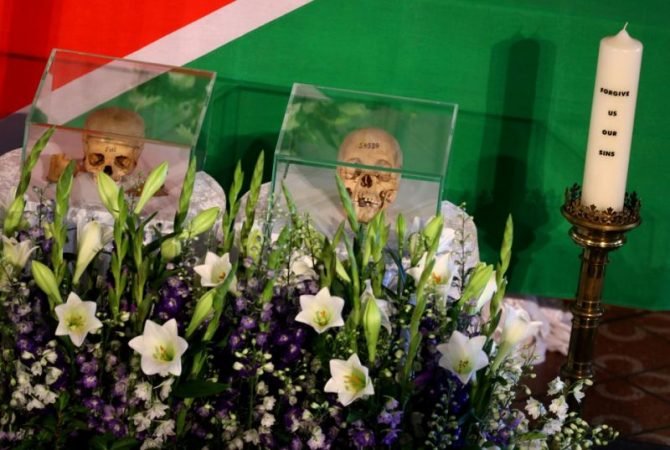 During a heated parliamentary debate, Namibian opposition lawmakers on Wednesday criticised a 1.1 billion euro ($1.3 billion) compensation offer from Germany for its 1904-1908 genocide in the southwest African country and called on the government to renegotiate terms.

Namibia’s government said in May that Germany had agreed to fund projects over 30 years to atone for killings and property seizures more than a century ago that killed tens of thousands of Namibians who defied German colonial rule.

But opposition parties and traditional leaders from affected communities are angry about the offer, as they say it is too small and that they were not involved in the negotiations.

On Tuesday, around 300 protesters stormed Namibia’s parliament when Germany’s offer was tabled.

“That document does not address our issues, it does speak about reparations and genocide. It is speaking about reconstruction,” Esther Muinjangue, president of the opposition NUDO party, said during Wednesday’s debate.

“We are not asking for reconstruction, you committed genocide and for that you pay reparations. Simple as that,” Muinjangue added.

Another opposition leader, RDP president Mike Kavekotora, said the Namibian government should at least get $9 billion from Germany as compensation for the atrocities committed against the Herero and Nama people.

Defence Minister Frans Kapofi, of the governing SWAPO party, acknowledged the agreement with Germany fell short of affected communities’ expectations but said negotiations had been tough. The government’s main aim was to secure an acknowledgement from Germany that its imperial troops had committed genocide, he said.

The speaker had to repeatedly call the parliament to order as SWAPO lawmakers were heckled.

Proceedings were adjourned until Thursday, when more lawmakers will give their views before a vote is held.

The compensation offer is expected to pass because of SWAPO’s majority, but the vote may not happen until next week because of the number of lawmakers yet to have voiced their opinions.

A representative of the Germany embassy in the capital Windhoek asked for questions in writing but did not respond in time for publication.