Major fire at migrant camp on Greek island of Samos 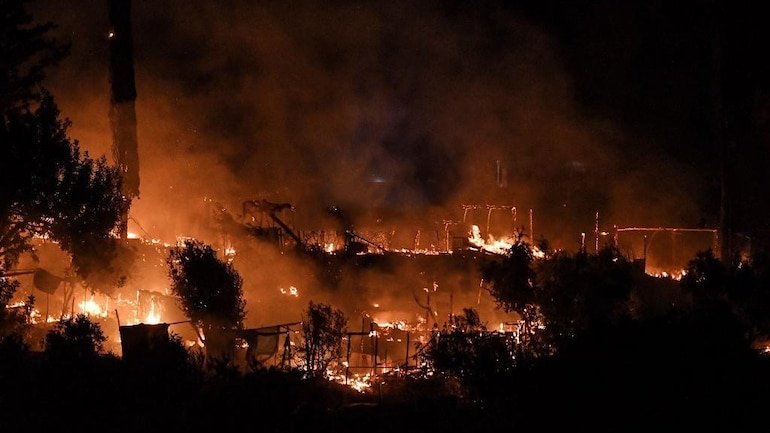 A major fire that broke out Sunday evening at the Vathy migrant camp on the Greek island of Samos, was brought under control, the Greek Ministry of Migration said.

“There is no danger for those who are still there because the fire broke out in abandoned sheds in the western side of the camp,” the ministry statement added.

Thirteen firefighters with six engines were fighting the blaze, according to the Fire Brigade that added there was no report of injury.

Earlier, as the fire still burned, the mayor of Samos, Girgos Stantzos, told AFP that the site had been entirely evacuated.

A number of migrants, including several children in tears, could be seen gathered at a car park near the camp.

The camp, due for closure at the end of the month, was still housing 300 people awaiting transfer Monday to a new “closed” camp opened this weekend by Migration Minister Notis Mitarachi.

According to the Ministry, all the asylum-seekers were evacuated to an empty space near the entrance of the camp.

While, 10 unaccompanied minors were expected to be transported to the new closed Samos facility later on Sunday, the rest of them will be transported there as planned on Monday.

The new Samos facility opened on Saturday is the first of five such camps, which are opposed by rights groups who say the tight access measures are too restrictive.

It also includes a detention centre for migrants whose asylum claims have been rejected and who are to be sent back to Turkey.

Campaigners had long denounced conditions at Vathy camp on Samos.

Located on one of the Aegean islands taking in migrants arriving from nearby Turkey, between 2015 and 2016 it sheltered nearly 7,000 asylum-seekers. It was only built to take in 680 people.

A year ago, the overcrowded camp at Moria, on the nearby Greek island of Lesbos went up in flames, destroyed in two fires that in quick succession that left 13,000 without shelter for several days.