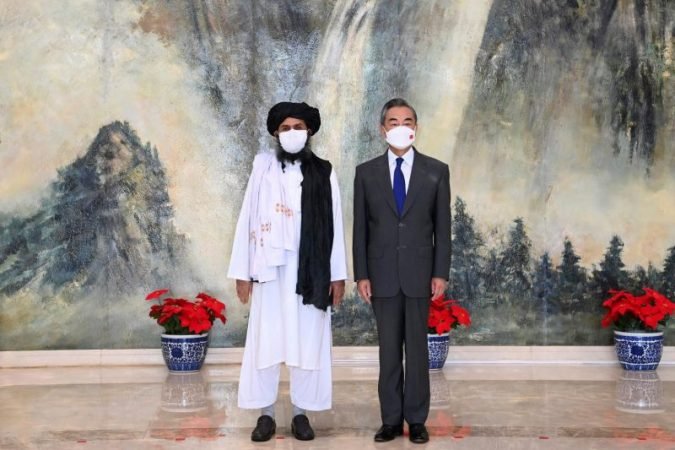 China’s recent cozying up with the Taliban have had come with some anticipation of China’s strategic move in the region. China has been eyeing a position of strategic depth for quite some time in Afghanistan. While the Taliban of the 1990’s despised any foreign presence, the present-day Taliban has clearly understood the importance of diplomacy and international relations. Taliban would open up three significant sources of wealth creation for China. Firstly, China, the world’s biggest chemical producer, is mainly dependent on precursor chemicals, especially those originating from opium plants, vastly available in Afghanistan. Secondly, China can expand its Border Road Initiative (BRI) infrastructure to expand its economic outlays in Asia and Central Asia. Lastly, Afghanistan is sitting on 1 Trillion-dollar worth of natural minerals, and China, the world’s largest manufacturing hub, has a vast requirement of such minerals to produce essential commodities.

Opium has always been a significant part of China’s economy, to the extent that it went to wars for it twice. Opiates are allowed as a precursor to many medicinal productions such as painkillers. The poppy flowers are the source of codeine and morphine, used for medical purposes such as blood thinners and painkillers. Chemical compounds like Acetaminophen, sourced from poppy plants used in general anesthetic, have made China the biggest producer of it. China has also been accused of selling opioids in synthetic forms to the illegal drug markets in the form of Fentanyl, which can result in lethality if taken without medical observation.

The drug trade in Afghanistan is so lucrative that often government officials let it transport across international borders under their noses for a price cut. Taliban controls the land, production, and the prices for opiates and makes over $400 million USD from it. China’s pharmaceutical trade, on the other hand, has capped past $ 200 billion USD in 2020, with interestingly, the US being its most significant consumer. Though the Taliban has claimed that it would halt opium production, its most important source of revenue, it could mean that China would directly export the opiate raw material to Chinese pharmaceutical production. It would still earn hordes of money for the Taliban to ease the funds required to run the nation without having to have sold it through illegal drug routes (Pic 1). With the US, IMF, World Bank, and other countries freezing their financial aid to Afghanistan, the Taliban is now desperate for cash-rich state investments. Thus, America’s pain is now becoming China’s gain.

China has already begun with its plans of expanse in Afghanistan by building a road through Wakhan Corridor, a thin strip of land that connects China to Afghanistan. The implications of this infrastructural outlay have two implications. Firstly, the corridor directly attaches itself to the Xinjiang province of China (Pic 2). Taliban’s win over western powers might fuel the fire in the region amongst the Uighur separatists. The Chinese need to maintain good relations with the Taliban to not encourage any ethnic skirmishes in the region of Xinjiang. Offering lucrative benefits through BRI would fit right into China’s strategy, and therefore Taliban has already extended an arm of friendship to Beijing.

Secondly, Afghanistan sits on trillion dollars’ worth of rare earth minerals. China will look to deepen its roots in the region, eyeing the great treasure. China is one of the largest lithium producers and already faces a shortage of raw material used in mobile phones, laptops, electric vehicles, etc. With an urgency to meet the fall, China needs a quick-pace network of roads and rails to bring the raw materials back to China. China will keenly build up the railroad network for the purposes in Afghanistan. This extension can easily stretch to Iran, where China has already signed a 25-year cooperation agreement and has begun to expand on its infrastructural projects. Although Iran is wary of China’s debt trap, the global sanctions on Iran have left it high and dry, and China has tactfully filled up the place by signing a $400 Billion USD deal to develop infrastructures and oil fields. An infrastructural outlay in Afghanistan will only deepen its root in the sub-continent and leave India as America’s only reliable ally in the region. China now has a clear dominance in South Asia, with Iran, Pakistan, and the Taliban-run Afghanistan as its strategic allies.

The decades of civil war have never let any government build a working infrastructure on the land. The speculations of Afghanistan’s treasured minerals to this day have struggled to manifest into real-life wealth. It had three major problems to deal with; firstly, the Ghani government had influential ties with Washington, which would have deterred the Afghan government from giving any place of comfort to China in Afghanistan. Secondly, without any peace in the country, it would have been hard for any nation to work on infrastructural development, similar to what China’s construction projects have had to face in neighboring Pakistan. Lastly, mining for minerals is a costly affair; also, it would attract dissent from the local population who are already deprived of a livable lifestyle, being exploited by money luring westerners.

Taliban already has signed a deal of partnership as stated above, clearing up the way for Chinese investments in Afghanistan. Previously an American-friendly Ghani government kept China at bay, but now with the Taliban’s support and Pakistan and Iran’s encouragement, it can quickly deepen its investment plans in Afghanistan. Additionally, the Taliban would also make efforts to gradually quell the civil war and finally maintain some form of peace in the nation. This would help China and other potential investors bring their wealth and resources into Afghanistan, which was previously impossible due to decades-long civil wars. Also, China is already well versed with the Taliban’s financial tightening and would happily loan out for initial investments in the region. China has been running a similar project for a long time in the African subcontinent. Countries like Ghana have defaulted in paying the loan amounts to China, pushing many other nations to give up their valuable resources to the Chinese government. Some other examples are Hambantota port in Sri Lanka and Chinese petroleum take-over of Nigerian oil lands. With all the infrastructural growth that China might bring, Afghanistan would have to put some collateral down; these mines of wealth would fit just about right for that requirement. Sitting on top of a trillion-dollar wealth land is bound to make China a very wealthy strategic ally, with the help from the Taliban.

With the ascend of the Taliban, America’s loss has become China’s gain, a gain that will help China deepen its strategic outlays in the region while making it multitudes of wealth at the same time. China is already the biggest pharmaceutical manufacturer of the world, the opioid precursor required for medicinal purposes will further support China’s pharmaceutical requirements. BRI will bring infrastructural developments in Afghanistan; a debt trap like tact might lead money-making mines to be handed over to China as collateral. Lastly, Afghanistan’s natural minerals will further help China dominate even more as the world’s manufacturing hub. Additionally, being friends with the Taliban will quell any separatist enthusiasm in the Xinjiang region of China. China has nothing to lose but only to gain from the Taliban’s friendship. An anti-American outlook of China will undoubtedly strengthen the bond between the two.