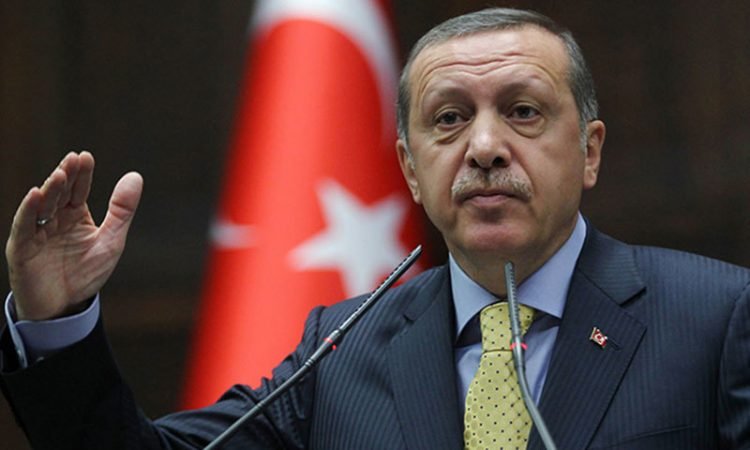 Turkey’s President Recep Tayyip Erdogan insisted Tuesday on a two-state solution in Cyprus and threw his weight behind plans for a coastal resort that was emptied of its original Greek Cypriot residents to be partially reopened.

His speech in the north of divided Nicosia marked another step towards opening up the ghost town of Varosha in defiance of UN resolutions and EU disapproval.

Speaking at a parade to mark the 47th anniversary of the Turkish invasion that divided the island, Erdogan took aim at failed UN efforts to reunite the two sides, saying “we don’t have another 50 years to waste”.

“No progress can be made in negotiations without accepting that there are two peoples and two states with equal status,” he said.

The island is divided between the Greek Cypriot-run Republic of Cyprus and the self-declared Turkish Republic of Northern Cyprus, recognised only by Ankara.

Turkish Cypriot leader Ersin Tatar, an Erdogan ally who supports a two-state solution rather than the federation long sought in UN-led negotiations, said an initial 3.5 percent of Varosha would “be removed from its military status”.

The speech sparked bickering with the EU’s top diplomat Josep Borrell, who said any such move was “an unacceptable unilateral decision”.

Turkey’s foreign ministry hit back, accusing Borrell of “acting as a spokesperson or advocate for the Greek Cypriot administration”.

The United States condemned the plan by Tatar and Erdogan, with US Secretary of State Antony Blinken saying in a statement that the move “was clearly inconsistent” with UN Security Council resolutions.

“The United States views Turkish Cypriot actions in Varosha, with the support of Turkey, as provocative, unacceptable, and incompatible with their past commitments to engage constructively in settlement talks,” Blinken said.

To cheers from Turkish flag-waving supporters, Erdogan accused the Greek Cypriots of “blocking any route to a solution” with a “maximalist approach… that is disconnected from the reality”.

He dismissed a warning this month from European Commission President Ursula von der Leyen that Brussels would “never accept” a two-state solution for Cyprus, an EU member since 2004.

In contrast to celebrations in the north, mournful sirens blasted across southern Nicosia at 5:30 am (0230 GMT) to commemorate the invasion anniversary.

Turkish troops seized Cyprus’s northern third in response to an aborted coup in Nicosia aimed at attaching the country to Greece.

“Life will restart in Varosha,” Erdogan said on the second day of a visit to the north, renewing an offer of financial compensation for Greek Cypriots who lost properties in 1974.

Once a playground that hosted Hollywood celebrities, Varosha lay abandoned for decades.

But the Turkish army restored public access to parts of its beachfront last year, weeks ahead of Tatar’s election.

The UN Security Council responded by calling for a reversal of the decision and “for the parties to avoid any unilateral action that could raise tensions on the island.”

Erdogan visited Varosha the following month in a move denounced by the Republic of Cyprus as a “provocation without precedent”.

Since then a major thoroughfare has been cleared and workers raced to spruce up the street ahead of a possible second visit.

Erdogan insisted that moves to revive the town would respect property rights.

“We don’t have an eye on anyone’s land, rights or property, but nobody can touch the rights of Turkey or the TRNC,” he said.

The internationally recognised government in Nicosia has stressed that Varosha is a “red line”, and strongly condemned Erdogan’s previous visit to northern Cyprus.

Russian Foreign Minister Sergei Lavrov’s office on Tuesday “underscored its adherence to the strict implementation of the UN Security Council resolutions” in a phone call with Cyprus Foreign Minister Nikos Christodoulides, a statement in Moscow said.

Greek Foreign Minister Nikos Dendias is due in Nicosia on Wednesday, hot on the heels of Erdogan’s trip.