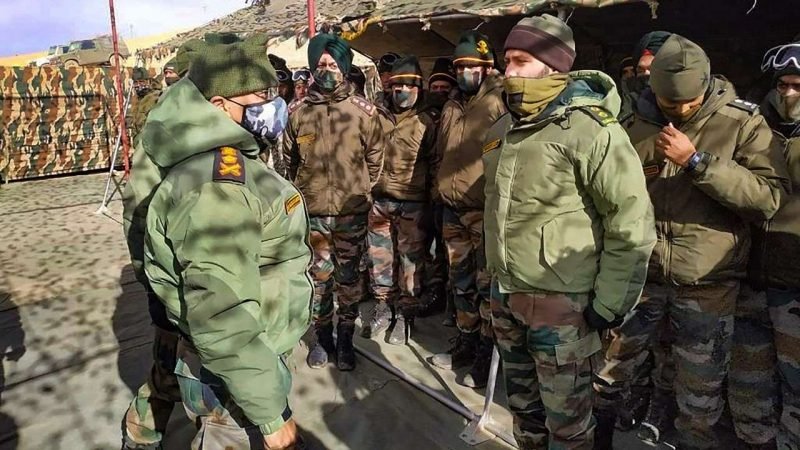 One of the most contentious fronts for ongoing geopolitical tensions between China and India has been the Sino-Indian border near Tibet. In 1962, these tensions first erupted into a war between the two countries, a war which China won and seized a considerable amount of Indian-controlled land (now Chinese administered Aksai-Chin). However, China, whose original objective for this war was to prevent India from aiding Tibetan separatism, has not concluded that India no longer represents a threat to its territorial sovereignty. Smaller skirmishes have continued ever since 1962 in Sino-Indian borderlands, with the most recent being in early 2020, when Chinese and Indian forces had an armed standoff in the Galwan River Valley (the eponymous river flows though Aksai-Chin and the neighboring Indian state of Ladakh). For the most part, the United States has remained either neutral or weakly partial to India throughout these border clashes.

In 1967, the CIA described Sino-Indian military standoffs in the Indian border region of Sikkim (North of Ladakh-Aksai Chin) as “military expressions of intensified political relations,” but did not appear to recommend any concrete US action. In 2018, the Trump Administration’s Indo-Pacific strategy envisioned diplomatic and defence support, potentially for border conflicts, to help Indian be a “counterbalance to China” within the context of US foreign policy ambitions. However, this support largely did not materialize before President Trump’s departure. Given the long history of consistently occurring border tensions and the lack of successful international agreements mitigating this problem, another conflict in the future is practically inevitable. When this happens, the United States should provide stronger and more tangible support in the form of a security treaty with India because of the strategic, geopolitical, and economic benefits that such measures would entail for both countries.

Why is a treaty necessary? One of the reasons current non-treaty arrangements between the US and other countries to counterbalance China in the Asia Pacific region, like the Quadrilateral Security Dialogue (the Quad), which includes both the US and India, are not as effective as deterring Chinese military aggression at locations like the Sino-Indian border is because they have to abstain from moves that may be seen as excessively “provocative.” For example, the Quad has not been able to directly condemn China’s aggressive military tactics because its members (aside from the US) have been rather reluctant to criticize China specifically in this respect and there isn’t a treaty to compel them otherwise. Similarly, when considering the bilateral military relationship between Indian and the US, this relationship does not have a security treaty, a reliable commitment mechanism to bind both parties together for the purpose of mutual defence. Therefore, it does not send as strong of a border deterrence message to China regarding borderland sovereignty as it could if a treaty were in place.

What would such a treaty look like? The US-Japan Treaty Alliance (originating from the 1951 US-Japan Mutual Defense Treaty) could be a suitable model here. It includes: 1) the ability for the US to establish military bases in Japan 2) the US committing to coming to Japan’s defence militarily if Japan is ever invaded and 3) the US pledging further military and economic support to Japan to counterbalance China. Among other criteria, any security US-India security treaty should emulate these three commitments.

What are the benefits of a US-India security treaty?  The ability to establish US military basis within Indian territory has great implications for Sino-Indian border deterrence policy. To explain, if the US chooses to establish military bases near the current Sino-Indian border, and Chinese armed forces ever into disputed territory as they have done in the past (e.g. Galwan Valley), the US could then interpret their actions as a violation of not only Indian sovereignty but also a threat to US troops stationed in the area. This could authorize the US to respond with a military force of their own. While this is unlikely given the major geopolitical consequences that such actions would unleash, the very possibility of this occurring sends an extremely strong message to China to respect the current border lines with India. One of President Biden and Congress’s main foreign policy goals is a tougher stance with China, and polls indicate that Americans of both partisan affiliations agree. Therefore, a US-India security treaty is a strategic move that boosts any US government’s position both domestically and internationally.

Additionally, a mutual security treaty between India and the US would also have economic implications. In response to China’s growing influence in the 2010s, President Obama was able to relatively swiftly use the existing US-Japan alliance to “pivot” from just military affairs to the welfare of their respective economies and “strengthen… economic ties” as a result. There is little reason to think that this could not happen between India and US should a treaty be ratified. If China intrudes into Indian-controlled Galwan Valley or elsewhere along the Sino-Indian border, then a US-Indian treaty alliance could certainly help augment commercial ties between the US and India to help bolster both of them against China.

To be fair, the treaty strategy does have its drawbacks. Treaty ratification is a slow process, especially since two-thirds of the US Senate has to agree before any treaty can be ratified. Given the high levels of political polarization right now, getting that many Senators to agree on anything may be a herculean task. However, as previously stated, such an approach more than compensates for its implementation time with its reliability and multifaceted applications. Together, the US and India can strengthen each other and help dissuade China from future territorial aggression. This treaty could also serve as a precedent for future US partnerships with other countries with proximity to Chinese expansionism as well, such as Vietnam or the Philippines, which could lead to further US foreign policy successes in the future.

Tuhin Chakraborty is a student at the Gerald R. Ford School of Public Policy at the University of Michigan. He has worked in the US House of Representatives and on the government affairs team of Quicken Loans, and was most recently a South Asia and International Security Intern at the American Enterprise Institute. Tuhin has previously been published in E-International Relations, International Policy Digest, and the Michigan Foreign Policy Review.