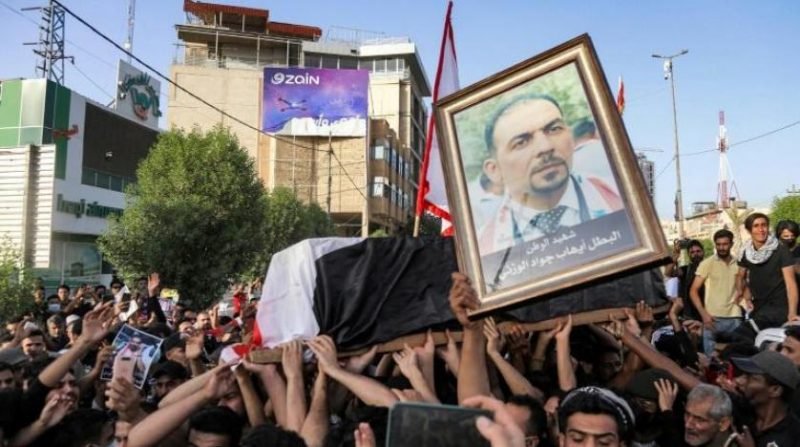 A wave of deadly attacks on pro-democracy activists and journalists in Iraq have sparked mounting calls to boycott October parliamentary elections, as perpetrators go unpunished.

Killings, attempted murder and abductions have targeted more than 70 activists since a protest movement erupted against government corruption and incompetence in 2019.

Elections were set in response to a central demand of the protracted protest movement that lasted from October to June 2020, and during which demonstrators also railed against Iran’s influence in Iraq.

But as attacks continue with impunity, more voices have joined a call to boycott the vote.

Former lawmaker Faeq al-Sheikh Ali resigned after anti-government campaigner Ihab al-Wazni was shot dead in an ambush in the central holy Shiite shrine city of Karbala on May 9.

“I announce my withdrawal from the legislative elections,” he said after Wazni’s killing.

He also called for other leaders of the protest movement to pull out of the race.

“Prepare… to continue the revolution in the coming months against Iran and its dirty militias,” Sheikh Ali said. “There is no other choice but to topple this criminal regime.”

Authorities have consistently failed to publicly identify or charge the perpetrators of the killings, which have not been claimed.

Wazni had for many years criticised Iraqi armed groups and Iran’s outsized influence in the country.

The day after he was killed, prominent journalist Ahmed Hassan was also shot in southern Iraq. He remains in a coma after undergoing brain surgery.

After Wazni’s murder, a movement born out of the anti-government protests called Al-Beit Al-Watani — the National Bloc — said it would boycott the October elections.

“We reject elections until the killers of the leaders of the October revolution are behind bars,” the bloc’s founder Hussein al-Gharabi told AFP, referring to the protest movement.

Since then, 17 groups have joined the call for a boycott.

They had presented lists for the elections, believing they had strong popular support to change the system through the ballot box.

But all that changed with the murder of Wazni and the attack on Hassan.

“We are firmly against holding elections, as long as weapons are freely available and killings continue,” the groups said in a joint statement on May 17.

Pro-democracy activists called for a protest on Tuesday in the capital Baghdad, to demand the government arrest those responsible for the killings.

They are convinced the perpetrators are known by security forces, but have not been arrested because of links with neighbouring Iran.

On Twitter, photos have circulated of prominent activists murdered in the country with the hashtag “Who killed me?”.

However, analysts expressed doubt that calls for a boycott would stop the elections, saying traditional parties control political power in the country through pressure, vote buying and intimidation.

Citing “chaos” in the country, analyst Ali al-Baidar said “it would be better to push back the elections until the security situation improves”.

“Money (to buy votes) flows freely, weapons circulate without any control and political parties impose their will on citizens. All this is an obstacle to transparent elections,” he said.

But he remained sceptical over the power of a boycott.

“There will be a media impact, and this will be a message to the international community, but it is the major parties that have the power and influence,” he added.

“Moreover, if there are demonstrations, they will not be on the scale of those in the past because the leaders have been killed, injured, fled the country or found refuge in autonomous Kurdistan”.

He said groups linked to the protest movement “recognised the error they made in wanting to participate in the elections”.

“They realised it was the traditional parties, backed by foreign states, in particular Iran, that control the state, power, money and weapons,” he said, adding that “they realise it is very difficult for them to enter the political scene”.

But communist leader Raid Fahmi, whose party has suspended its participation in elections, warned the situation could be volatile.

“The people are frustrated,” Fahmi said. “If the doors of democracy and free, transparent elections close, this could lead to a new wave of violence.”