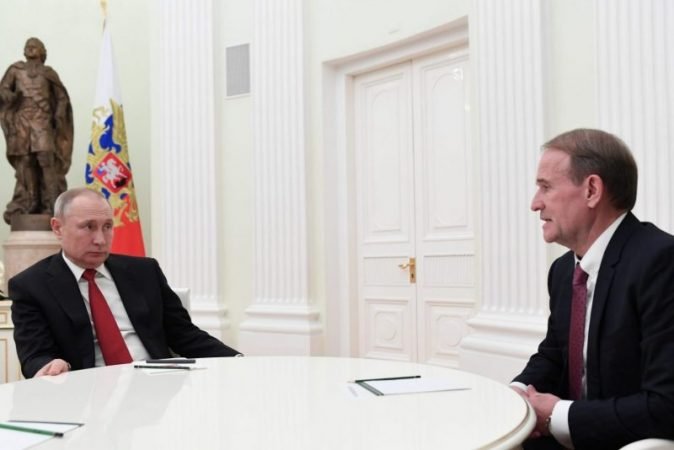 The Ukrainian authorities put Viktor Medvedchuk, the Kremlin’s most prominent ally in Ukraine, under formal suspicion for high treason on Tuesday as part of a crackdown on his circle that has fuelled tensions between Kyiv and Moscow.

Prosecutors are seeking to detain Medvedchuk, an opposition party leader and businessman, on suspicion of treason and the attempted plundering of national resources in Crimea, the territory that was annexed by Russia in 2014.

“Medvedchuk, as the organiser of all this illegal activity, having strong ties with the leadership of the Russian Federation, began, according to the investigation, subversive activities against Ukraine, including in the economic sphere,” Prosecutor General Iryna Venediktova told a press conference.

As evidence, Venediktova and the head of Ukraine’s security service said Medvedchuk had enabled Russia to appropriate a gas field in Crimea that Medvedchuk had obtained a licence to explore before the 2014 annexation.

Medvedchuk’s party issued a statement saying the treason investigation and raids on his home were revenge for Medvedchuk exposing the government’s failings.

In a separate statement, Medvedchuk said the treason case was “fabricated”, adding: “I declare that I am in Ukraine and do not intend to hide from justice.”

Tuesday’s move is part of a widening crackdown against Medvedchuk that began in February when he and associates were put under sanctions by Ukraine’s president and three television channels owned by an ally were forced off air.

It comes after months of tensions between Kyiv and Moscow over a build-up of Russian troops on Ukraine’s eastern border and rising clashes in eastern Ukraine. The Kremlin has sharply criticised the crackdown on Medvedchuk.

Prosecutors also put lawmaker Taras Kozak, Medvedchuk’s political associate and the owner of the three television channels that were placed under restrictions in February, under formal suspicion for high treason and are seeking his arrest.

Kozak could not immediately be reached for comment. The head of Ukraine’s security service (SBU), Ivan Bakanov, said Medvedchuk was believed to be in Ukraine while Kozak was in Russia.

Medvedchuk is a Ukrainian citizen but has close ties with Russian President Vladimir Putin and has said the Russian leader is godfather to his daughter. The Kremlin said in February it was alarmed by the sanctions against him.

Ukraine and Russia have traded blame for escalating clashes in eastern Ukraine, where Ukrainian troops have fought Russian-backed separatist forces in a conflict that Kyiv says has killed 14,000 people since 2014.

President Volodymyr Zelenskiy’s government said on Tuesday Russia still had around 100,000 soldiers massed near Ukraine’s border and in Crimea despite announcing a troop pullback in April after a standoff that alarmed the West.

The United States slapped sanctions on Medvedchuk in 2014 and supported the crackdown on the TV channels this year to “prevent disinformation from being deployed as a weapon in an information war against sovereign states.”