QUAD in the Indo-Pacific 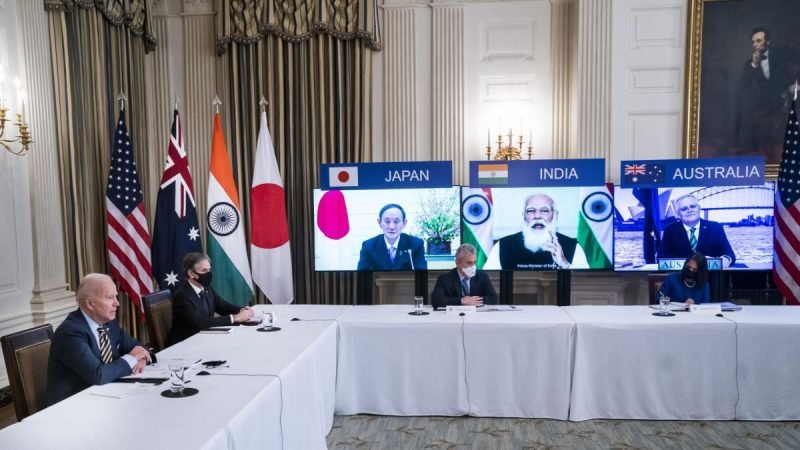 The QUAD (Quadrilateral Security Dialogue) leaders had their first summit-level meeting on 12th March 2021. Leaders of all four member-states had a virtual meeting to discuss the issues of common interest. Combating the Chinese aggression in the region is a known agenda of QUAD but there are other issues that the QUAD members want to discuss. In this summit, the leaders discussed the following issues (1) Matters related to the Covid-19, (2) Free and Open Indo-Pacific, (3) Economic and Technological Cooperation and lastly (4) Climate Change. The Joint Statement from QUAD showed that they want a stable and peaceful Indo-Pacific.

This summit showed the significance of the Indo-Pacific for the newly elected U.S. government. Being one of the first international engagements of President Biden, it confirms that the politics and developments of the Indo-Pacific are of significance to the U.S. administration. But it will be important to see if we will get to see the larger implementation of policies in this term.

India is now providing the Covid-19 vaccine to several states. It would be important for the members of QUAD to discuss the easy vaccine supply. Another issue related to the Covid-19 vaccine would be to give the vaccine to everyone means in the world and especially in the Indo-Pacific. Investing in the Indian vaccine would be a good initiative to make the vaccine accessible to all. Larger investments in the Indian vaccine will also act as a strategy to counter the Chinese vaccine.

In the case of Economic and Technological Cooperation issues like the development of a strong supply chain, and the exchange of critical technology will be important. Here it will be important to discuss issues like renewable energy, space technology, cyber technology and security. Investments in infrastructure and technology in the growing industries of the Indo-Pacific states will be a good opportunity to offer technical advancement to the region. This will also create a balance for the Chinese trade and investments in the region.

Climate change is a major agenda in the Biden Administration. Here transfers of green technology from QUAD states to each other and the states in the Indo-Pacific will be a good point to start. All the Quad members can help the states in developing solar energy, wind energy and hydro-energy based on their experience and create better green energy and technology which will help in reducing the environmental impact in the region.

It is necessary to understand that QUAD members are united mainly to counter the Chinese aggression in the Indo-Pacific but this cannot be the sole motive of the grouping. They need to offer solutions to issues that are crucial for states in the Indo-Pacific. QUAD is often seen as a threat to ASEAN (Association of Southeast Asian Nations) Centrality in the region. QUAD needs to assure that it is not perceived as a threat to ASEAN. The QUAD Plus was proposed in the past where they wish to include states like Vietnam into the grouping. Such states will only accept any engagement of QUAD in the region if it indicates that they intend to have a peaceful Indo-Pacific where the rules of law are maintained. As ASEAN is the main driver of the several technological and economic development in Southeast Asia, being perceived as a challenger to it would have terrible implications for QUAD.

The states of Southeast Asia have on several occasions mentioned that they do not wish to take sides in the US-China rivalry, therefore, it would be beneficial for QUAD to project itself as more than a Counter China Alliance. The actions of QUAD and the Chinese reaction to them will influence the politics of the Indo-Pacific.

Shivangi Dikshit is a recent post-graduate from the School of International Affairs, O.P. Jindal Global University (JGU). She focuses on the developments of Southeast Asia. Currently, she is a Research Analyst at the Center for Southeast Asian Studies, JGU.