US Secretary of Defence state visit to India: Stability, Sanctions and Shared visions 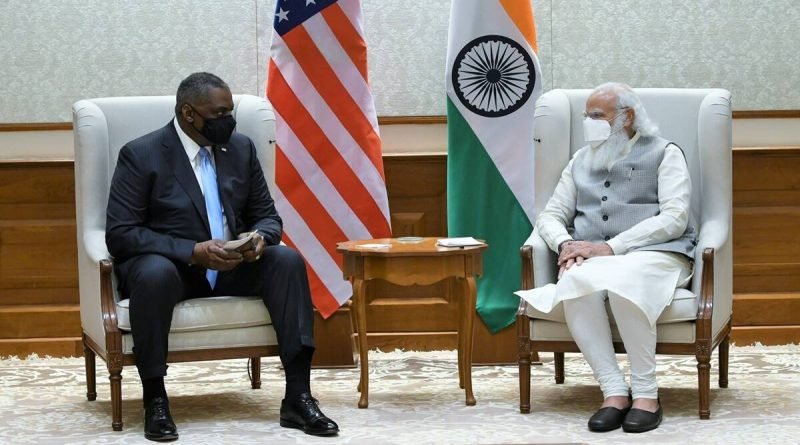 The India-US relationship took another leap of triumph as US Secretary of Defence Llyod J. Austin visited India for 3 days—marking the first visit by a top administrator under the Biden Administration on a state-visit. The three-day visit epitomized the US’s strategic relations with India and further allowing room for more deals and diplomatic missions. Austin’s visit has also been under scrutiny given the attention the QUAD countries received after the leaders’ summit earlier this month. However, certain things that cannot go unnoticed and must be taken into consideration is India’s defence plans and its road map to be a part of the global defence market as well as the US’s intention in the region, dominated by political instability and tensions between various neighbouring states. It is not of any surprise that the US’s close relation with India will affect the geopolitics and might serve as an advantage for India to tackle China.

Travelling back to the past defence deals which accentuated the Indo-US relations under the Modi Government and Trump administration had found its roots in the ‘2+2’ Dialogue. The outcomes of each dialogue ended with the Logistics Exchange Memorandum of Agreement (LEMOA) in 2016, the Communications Compatibility and Security Agreement (COMCASA) in 2018 and the latest being Basic Exchange and Cooperation Agreement (BECA) in 2020. Each strategic military association has been assessed and reassessed over time to understand the growing alliance between the two countries. The BECA allows India to use the US’s geospatial technology and this will assist India in several ways, lesser evaluated and imagined. The trust between India and the US have bloomed under the Modi-Trump ‘friendship’ as certain deals of defence require a great deal of trust. Exposing a country’s military assets might not be a plausible option, however, India and the US under the previous US administration kept all odds aside to forge a relation stronger than ever.

The Biden Administration has taken this strategic alliance as a priority as mentioned by the US Secretary of Defence in a press conference in New Delhi. The meeting which included Defence Minister Rajnath Singh and Indian Prime Minister Narendra Modi had ended on a “productive note”, as assured by Austin. The Indian Defence Minister expressed his optimism at the press conference and he said, “We reviewed the wide gamut of bilateral and multilateral exercises and agreed to pursue enhanced cooperation with the U.S. Indo-Pacific Command, Central Command and Africa Command.” US Secretary of State affirmed that the commitment of the Biden-Harris administration to always cater to the US’s strong partners and alliances. Although no new deals were put on the table, the visit primarily reviewed the defence alliance and its possible expansions in the new future. Differences in plans in the South East Asian region has always been a matter of contention, as the US keeps a close eye on developments in the South China Sea—India has not been very opinionated about it. Forged a common vision through the QUAD, India and the US now work cohesively towards a free and inclusive Indo-Pacific region. But Austin’s press release pointed more than it was anticipated.

The US Secretary of Defence answered most of the questions with the US’s prime intention to always work with like-minded countries. Austin stressed that expand alliances the foundational principles must align and that explains the working mechanism of QUAD and ASEAN to some extent. He mentioned, “India and us are the largest democracies in the world. There’s clearly some shared values there that we’ll continue to work together to — we can build upon that and we are building upon it in economic interest. So, there are a number of things that we can and will work on going forward.” Austin might unintentionally have given a significant clue to the world upon the expansion of the QUAD with South Korea at the top of the list. The Press Conference also found the Defence Secretary being asked questions related to India’s democratic processes, especially the treatment meted out to Muslims in the country and the recent Farmers’ protest. Austin clarified that the US rests its trust in India to uphold democratic values since this is a symphony of the world’s two largest democracy.

But, the air thickened when the question of the S-400 systems deal between India and Russia was asked. It is no new information when Turkey was sanctioned by the US upon the acquisition of S-400, so is there any possibility that India might be sanctioned for the same? Austin simply had replied that since the acquisition of the system has not been done yet, the issue of sanctions was not discussed. The USD 5 billion deal between India and Russia upon the acquisition of the S-400 has been viewed with apprehension, especially in the West. There are a group of analysts who see the US’s closeness to India as an extremely planned tactic to shun out Russia from the picture and Austin even confirmed this as he mentioned, “we certainly urge all our allies and partners to move away from Soviet or excuse me Russian equipment.” It is indeed an uneasy agenda for the US and India, but open discussions on this might avert any compromise for India with either US or Russia.

The US Defence Secretary while returning to the US made a surprise visit to Kabul. In a statement released by the Pentagon to explain Austin’s surprise visit, it stated that the intention was to understand Ghani’s vision and what he ardently felt about the political tensions shaking up Afghanistan again. The statement confirmed that no comments on the Taliban’s requirements of the Doha Agreement were passed.

What marked as the first US administrator visit to a state under the Biden Administration, the visit shows the layered visions shared between India and the US. To be highly optimistic regarding this relation might be an overstatement, but it has slowly evolve given the unprecedented times, both for politics and defence. India has to steady itself both in the region and the global stage to allow more space for its interests and tackle both the allies and rivals.