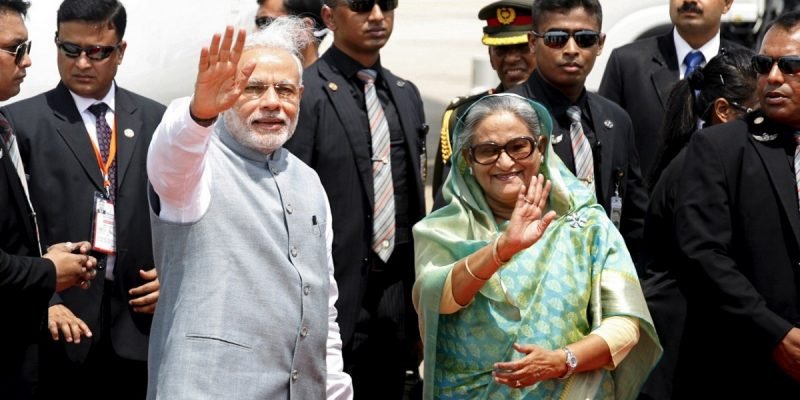 Indian Prime Minister Narendra Modi will be visiting Dhaka on 26th March 2021, as he sets to commemorate 50 years of Bangladeshi Independence from Pakistan after the Bangladesh Liberation War 1971. Sources claim that before PM Modi’s three-day tour in March, the Indian External Affairs Minister, S. Jaishankar will visit Dhaka to sign a comprehensive treaty on economic cooperation, thus aiming to deepen the Indo-Bangla ties further. However, just ahead of these cordial visits, a fresh Rohingya refugee crisis has bought India and Bangladesh on opposing ends as on Friday the Indian coast-guard ships found a boatful of 81 Rohingya refugees displaced in the Andaman Sea.

The United Nations High Commissioner for Refugees (UNHCR) affirmed to receive a report of an “unconfirmed number of Rohingya refugees aboard a vessel in distress” on Saturday 20th February 2021, following which it urged the regional countries to begin an immediate search-rescue mission. “In line with international obligations under the law of the sea and longstanding maritime traditions, the duty to rescue persons in distress at sea should be upheld, irrespective of nationality or legal status,” mentioned Indrika Ratwatte, the Director of the UNHCR Regional Bureau for Asia and the Pacific said to reiterate the regional countries of their international duty to rescue the refugees in distress. Later, in the subsequent week, a senior Indian Coast-guard official confirmed that the Rohingya Refugee boat has been tracked down near Andaman and Nicobar Island.

As the two Indian coast-guard ships were dispatched to help the refugees, Anurag Srivastava, the official spokesperson of the Ministry of External Affairs (MEA) updated that Rohingya’s boat was said to be sailed from Cox’s Bazaar, Bangladesh’s district bordering Myanmar on 11th February 2021 with 90 refugees – 56 women, 8 girls, 21 men and 5 boys, with hopes of reaching Malaysia. However, the engine of the boat failed on 15th February 2021, due to which it adrift in the Andaman Sea. As Rohingya subsequently ran out of food and water, most of the survivors were suffering from illnesses and extreme dehydration, while 8 refugees were reported dead and one is still missing, MEA updated.

Further, the Indian Coast-guard official highlighted that though the Rohingya survivors were provided with food, water, clothes, and medical assistance, they were not allowed to ashore the Indian territory.

After India’s rescue mission in Andaman, the Indian Foreign Ministry communicated to Bangladesh about the 81 Rohingya survivors to facilitate a safe travel return of the Rohingyas, which were found drifting in international waters, two weeks after they sailed from Cox’s Bazaar, Bangladesh – an area where the refugee camps have been established for more than a million Rohingya who fled after Myanmar’s military conducted a deadly ethnic crackdown on them in 2017. The MEA spokesperson, also filled in to inform that 47 of the occupants of the boat possess their official Refugee ID cards issued by the UNHCR office in Bangladesh, stating that they are displaced Myanmar nationals and persons of concern to the UNHCR registered by the government of Bangladesh. However, the Bangladeshi government refused to take back the survivors, further asserting that they were unaware of any boats leaving the camps. On the other hand, the Foreign Minister of Bangladesh, AK Abdul Momen stated that Bangladesh is under “no obligation” to shelter the 81 Rohingyas as they are Myanmar nationals, not Bangladeshi. He further asserted that the fled refugees’ vessel was found 1,700km (1,100 miles) away from the Bangladesh maritime territory, whereas was located quite near the Indian maritime territory 147km (91 miles) away or from Myanmar’s territory 324km (201 miles) away, thus signifying Bangladesh’s inclination to push back the issue of refugees’ rehabilitation upon other regional countries.

“Has Bangladesh been given the global contract and responsibility to take and rehabilitate all the Rohingya or boat people of the world?” Momen added while attacking the international organization – UNHCR to take responsibility for the 47 occupants with UNHRC IDs.

Bangladesh’s resistance to shelter the fled refugees, can simply be understood as the Rohingyas were originally residents of the Rakhine province of Myanmar who fled during the military crackdown in 2017 due to ethnic cleansing and Bangladesh has been a destination for Rohingya refugees for a long, thus causing an increase in Rohingya immigration, currently recorded to be around 5 lakhs immigrants. Thus, it can be said that Bangladesh might have been facing domestic pressure from within to ease the Rohingya refugee situation as in recent times, it has also been trying to de-congest Cox’s Bazar camp by moving thousands of Rohingya refugees to a new and remote island called Bhasan Char in the Bay of Bengal. A similar resistance to shelter the Rohingyas can be said to be witnessed by India as it is not a party to the 1951 United Nations Refugee Convention or its 1967 Protocol, moreover, India borders are quite porous and any conflict can lead to a mass movement of people, which will certainly strain India’s limited resources, given that it has the 2nd largest population which is increasing day by day.

However, both Bangladesh and India must resolve the age-long Rohingya refugee issue before PM Modi joins the 50th-anniversary celebrations of Bangladesh’s independence, as non-settlement of the issue might strain Indo-Bangla ties, something which India cannot risk. Moreover, the Rohingyas refugee issue is of common interest for both the states, thus they must work together to especially as both the countries are not a signatory to the 1951 Refugee Convention. Lastly, as India aspires to be a regional power is subsequently deepening its diplomatic ties across the Asian region via its global initiative of Vaccine Matri and other development projects in neighbouring countries, India must obligate itself to follow the principle of “non-refoulement” as articulated in various human rights treaties like the United Nations Convention on Torture and the International Covenant on Civil and Political Rights (ICCPR) and the Genocide Convention, 1948 and India ratified this pact in 1959.