PSLV-C51 uplifts Brazil and US satellites in orbit, completing its commercial mission via surveilling IOR 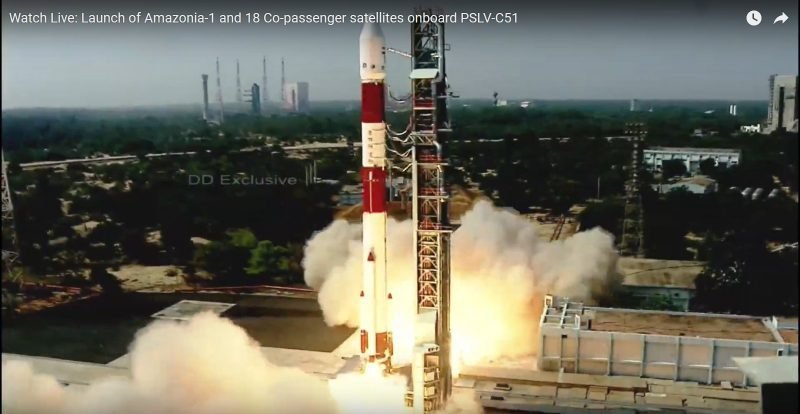 India-Brazil marked a historic moment in their space cooperation as the Indian Prime Minister, Narendra Modi on 28th February 2021 congratulated Jair Bolsonaro, the President of Brazil on the successful launch of Brazil’s Amazonia-1 satellite into the sun’s synchronous orbit by the Indian Space Research Organization’s (ISRO) PSLV-C51 rocket. The Polar Satellite Launch Vehicle-C51 (PSLV-C51) blasted off on Sunday, 28th February from India’s first launchpad at the Satish Dhawan Space Centre, SHAR, Sriharikota, Andhra Pradesh at 10.23 am laden with 18 small satellite passengers and Amazonia-1 as its main payload, further marking the 53rd flight of PSLV and 3rd with the new power configuration – DL variant i.e., equipped with two solid strap-on boosters.

The 637-kg earth observation satellite Amazonia-1 is the first Brazilian satellite designed, developed, and operated by the National Institute for Space Research (INEP), the research unit of Brazil’s Ministry of Science. The satellite aims to provide remote-sensing data to users for monitoring deforestation in the Amazon region and surveying the diversified agricultural land across Brazil, thus strengthening the existing structure to a greater extent. The new satellite would not only generate multiple business and governmental opportunities but will also help the Brazilian government to “fulfil the environmental commitments” towards the Amazon rainforest, the Brazilian Ambassador Andre Lago stated.

It should be noted that even though India and Brazil have extensively been cooperative in many fields, the Space sector remains a major area of collaboration, as both countries have a partnership in data sharing and satellite tracking on a semi-commercial basis for a long time.

The Indo-Brazilian Space ties began in March 2002 when the Department of Space, India, and the Brazilian Space Agency (AEB) signed an MoU, following which they adopted a Framework Agreement in 2004, which constituted a Joint Working Group on Space (JWG). In 2007, the Brazilian ground stations were permitted to access remote-sensing data from Indian Satellites (Resourcesat-2), as the two countries signed an Implementing Arrangement of Brazilian Earth Stations. Further, the Brazilian Earth Stations of Alcantara and Cuiaba provided tracking facilities to ‘Chandrayaan – 1 & 2’, ASTROSAT and are still being used by ISRO to receive and process data of Indian Remote Sensing Satellites. Recently, in 2018 two AEB officials joined an 8-week long nanosatellite building training programme at ISRO.

Moreover, the efforts to intensify space cooperation as a priority area as acknowledged by President Bolsonaro and PM Modi in January 2020, now seem to have taken momentum as Marcos Pontes, Brazil’s Minister of Science has termed the launch of satellites as the “beginning of stronger relations between India and Brazil” and hinted towards deeper cooperation with India in payload and platform development.

The co-passenger Sindhu Netra’ – a monitor to the Indian Ocean

Signalling a new era for Brazilian industry for satellite development, the PSLV-C51/Amazonia-1 mission also marks the first PSLV commercial mission for NewSpace India Limited (NSIL), a government of India company under the Department of Space, which undertook the commercial arrangement with an American aerospace company – Spaceflight Inc. For this commercial mission PSLV-C51 uplifted 18 co-passengers along with its primary passenger Amazonia-1, the co-passengers include five Indian satellites and 13 from the US. Amongst the five Indian satellites, four (3 UNITY sats and SDSAT) are signed for launch by IN-SPACE, ISRO’s small satellites facilitation agency, whereas the remaining 14 satellites were signed by NSIL for commercial launch.

The UNITYsats providing radio relay services are built by students of Jeppiaar Institute of Technology, Sriperumbudur, G.H.Raisoni College of Engineering, Nagpur and Sri Shakthi Institute of Engineering and Technology, Coimbatore. Whereas the Satish Dhawan Sat (SDSAT) which aims to study radiation, space weather, and demonstrate long-range communication is built by Space Kidz India. The 13 US satellites were SAI-1 Nano Connect 2 and 12 SpaceBEE’s for two-way communication and data relay.

However, the fifth Indian satellite onboard PSLV-C51 was ‘Sindhu Netra’ – a commercial payload signed by NSIL commercial arm as a technology demonstrator and developed by Defence Research and Development Organisation (DRDO). This satellite aims to boost India’s surveillance capabilities to monitor both military warships and merchants shipping in the emerging volatile epicentre of the world – the Indian Ocean Region (IOR). Further, sources claim that the satellite is capable to carry out surveillance in specific areas such as the South China Sea or the pirate-infested areas near the Gulf of Aden and the African coast. Sindhu Netra will also expand India’s surveillance networks over the Ladakh areas, Line of Actual Control (LAC) and Line of Control (LOC), thus enhancing India’s Defence capabilities to counter Sino-Pak aggression on IOR as well as on land.

AS PLSV-C51 rocket puts Brazil, US & Indian satellites into orbit, we can witness the growing Space cooperation amongst the states to enhance their communication capabilities regarding Defence or environmental disasters, thus reaching new heights to counter the emerging trends of threats. Moreover, as India initiated its first commercial mission, the SDSAT nanosatellite included an engraved picture of PM Narendra Modi with a copy of E-Bhagavad Gita symbolising India’s commitment towards PM Modi’s initiative of Atamnirbhar Bharat and Space Privatization.

The launch has also strengthened the bilateral engagement between the two BRICS partners, who are currently (under BRICS) discussing the proposal for ‘BRICS Virtual Constellation of Remote Sensing Satellite’ to establish a mechanism to share remote-sensing satellite data. Growing Brazil-India Space ties will empower and enhance the development process in both countries as the two partners look forth to deepen cooperation in payload and platform development. Lastly, the DRDO developed satellite – Sindhu Netra as NSIL commercial mission with the US symbolises the deepening of Indo-US ties to counter China in the IOR region, whereas it also highlights firm ally support to strengthen India’s Defence surveillance capabilities to guard its regions sovereignty. Hence, for India PSLV-C51/Amazonia-1 tuned out to be a win-win situation as it accelerated the goal of self-reliant India and also strengthen the global bilateral ties with Brazil and the US.