Gandhi’s statue vandalism in the USA: Decoding discontent against Mahatma 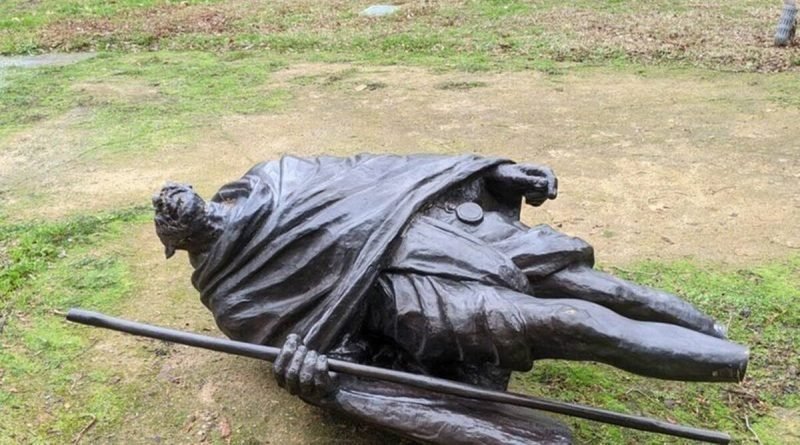 Unknown miscreants have vandalized Mahatma Gandhi’s statue in a park in the U.S. state of California, shocking and outraging Indian-Americans across the United States who have sought that the officials should now investigate it as an incident of hate crime. The 6-ft tall, 650-pound (294 kg) bronze statue of Gandhi, in the Central Park of the City of Davis in Northern California, has been donated by the Indian government to the city of Davis and was installed by the city council four years back amidst ongoing protests from anti-Gandhi, anti-India separatist organizations. Soon after the incident took place, the vandalism was praised on Twitter by Pro-Khalistan groups in California, who shared photos of the destroyed statue, and others who stated “Today is a Good Day”.

India on Saturday strongly denounced the incident, taking up the matter with the US Department of State demanded a thorough investigation into the incident and appropriate action against those responsible for the “despicable act”. “The government of India strongly condemns this malicious and despicable act against a universally respected icon of peace and justice,” the Ministry of External Affairs (MEA) said. “Local Indian community organizations have condemned the act of vandalism,” the ministry said.

Why rising resentment against Gandhi amongst some sections of the global community?

This wasn’t the first instance a statue of Gandhi has been desecrated. In December 2020, anti-India group had desecrated a Mahatma Gandhi statue in Washington, DC at the front of the Indian Embassy. The movement for the removal or vandalism of statues that glorify odious historical characters is garnering attention. Originating in South Africa as the #RhodesMustFall movement in 2015, it spread to other parts of the world. Amidst this, M. K. Gandhi’s statue was defaced in Johannesburg, with calls for “Racist Gandhi must fall”, in 2015. When in 2003, Gandhi’s statue was raised in Johannesburg, scores of petitions demanded the removal of the statue. In 2016, Gandhi’s statue had been removed from the University of Ghana after lecturers and students petitioned the government to remove the, what they allege “racist symbol,” that was not installed with consultation in a space and which does not offer any statues or symbols of African heroes.

These gestures of vandalizing statues of Gandhi previously gestures adopted by anti-India Sikh protestors and Hinduphobic radical organizations like Organization for Minorities in India (OFMI) to mock India during demonstrations but the Black Lives Matter movement has encouraged anti-Gandhi campaigners to start their campaign afresh due to Gandhi’s well-documented anti-black racism views. As the #BLM gained momentum increasingly after George Floyd’s death, such Instances of vandalism of statues have increased  as an act of discontent among people. However, Peace-loving Indian-Americans have expressed deep anguish and shock at the incident.

Gandhi’s morality has been the subject of rising dissension over recent years. The hashtag #Ghandimustfall (sic) is being circulated on social media in South Africa., USA, UK. Twitter users are quoting articles reporting that as leader of the Natal Indian Congress, he said that Indians were superior to black people and petitioned the colonial government to have a separate entrance for them at the Durban Post office, where they had previously used the entrance reserved for black people.

Particularly Gandhiji’s reference to African people towards the close of the 19th century as “kaffirs”, the meaning of the word is “non-believers” and it is derived from the Islamic text. Gandhiji was living with Gujarati-speaking Muslim people when he arrived in South Africa and learned that this was a common term and so used it but not in derogatory sense. He didn’t always use the same term. There are many illustrations where he had used Native or Zulu to describe African people. It was not considered derogatory that time as South Africans took it highly offensive. Perhaps in the same way as “coolie” was used in those days to describe Indian people generally, to describe them a person who carries luggage and it is still used in India.

Gandhi was known as a champion of human rights and justice. Although, in his twenties, it would be wrong to not to mention that Gandhi did made a judgement when he described them as savage and inferior to the Indian. While this was within the context of an application to retain the qualified voting rights that Indians had, today when we look at it, indeed we feel we cannot justify it.

Gandhi has worked for humanity and human rights throughout his life. However, in his younger days, perhaps we may encounter with a categorically entirely different Gandhi.  In South Africa in his 30s, Gandhi did make a judgement when he described them as savage and inferior to the Indian. When we look at it, indeed we feel repugnance and we cannot justify it. But when we came across the churning ideas and his experiments with truth throughout his journey, many people across the world would love to admire Gandhi and hail him as a true ‘Mahatma’ (great soul) as they might have experienced what is called ‘cognitive dissonance’ (the mental conflict that occurs when beliefs or assumptions are contradicted by new information). Those who suffer from this psychological state cognitive dissonance reject, explain away, or avoid new information; persuade themselves that no conflict really exists; reconcile the differences; or resort to any other defensive means of preserving stability in their conceptions of the world and of themselves. And Gandhi was one of such dissonant whose encounter with truth has transformed and reformed throughout his life journey.

Gandhi is known as a champion of human rights, justice, peace and non-violence. And such destructive acts are not in harmony with our community standards, these are not in the line of legacy of Gandhi as a person. Thence, India also would like to urge those who are opposing Gandhi’s ideology of peace to express their protest in a peaceful and democratic way. It would be better if they can engage in discussions instead of getting engaged in violence.