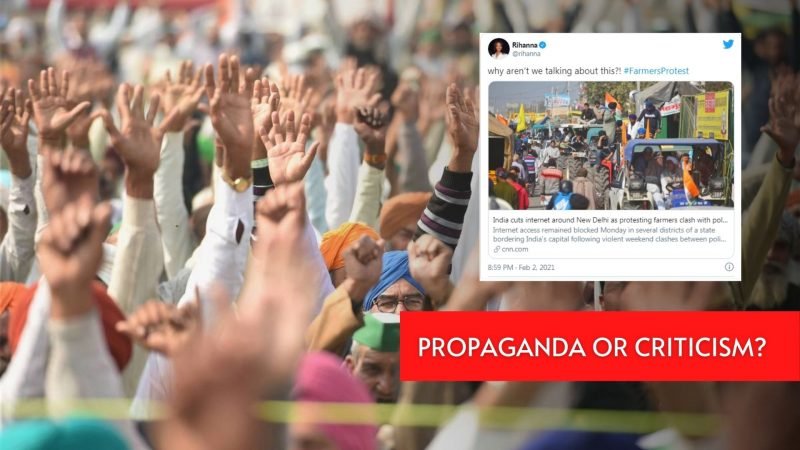 The farmers’ protest in the country has taken an unexpected turn. The protest is no longer limited to those three bills passed by the Indian Parliament which led to the protest in the first place, but it has become a hotch-potch of tweets, celebrities and ‘propaganda’.

Post-Republic Day protest has found the grounds of reason and rationale divided and it won’t be a mistake to pronounce that the general public sentiment is not the same as it was three months ago. Back in December 2020, the protests were limited to the three farm bills and talks for negotiations between representatives of the farmers and the government. But the trend being set now is to gain support for the three months long protest finds itself between ‘Khalistani Movements’, ideology divide and social media. A similar such event has produced a hue and cry yet again when the international pop sensation Rihanna tweeted about the farmers’ protest stating, “Why aren’t we talking about this?”.

The tweet made by her was followed by Greta Thunberg, the climate change activist, Meena Harris, Amanda Cerny to name a few. However, addressing the elephant in the room can these tweets made by the celebrities be called ‘propaganda’?

Observing from the tweets which surfaced as replies to the ones made by these celebrities, one commonality in those responses highlighted the farmers’ protest to be India’s ‘internal matter’ and any foreign interference is uncalled for.

These tweets are just a modicum to create further sensation and divide among the Indian masses. But one cannot disregard the fact that India as a country and Indians as global citizens are very prompt in commenting about world issues. Previously last month when violence broke out in the US Capitol Hill, thousands of Indians had taken to Twitter, Instagram and other social media platforms to voice their opinions on the incident. Even during the Presidential Election 2020, India was a close observer of the process. So how can the country close doors for opinions and thoughts which have interests embedded in its home ground?

But the picture isn’t as crystal clear as it might sound or even look. Yesterday following the twitter debate, the Ministry of External Affairs released a campaign under the hashtags of #IndiaTogether and #IndiaAgainstPropaganda. This campaign could be seen as a counter to the Twitter trend and the government’s tactics to give a response. Despite being a democracy, the curb on people expressing their thoughts is not welcoming. Twitter has always been a space for individuals to opine their thoughts and various verbal spats are exchanged daily. So, was it necessary on part of the government to come out in such a manner and protect the interest of those who have been supporting the farm laws since their inception? Even if it came outrightly the other question that one needs to ponder and address is could there be a possibility of the Indian Government being aware of a ‘lobby’ planning to create divergence and sensation?

One has to understand the thin line between Government of India and India. A particular tweet must not be the impetus for any government to react in a manner which could aggravate the situation by drawing more international criticism. In a nutshell, criticism cannot be equated to ‘propaganda against India’.

Not ruling out the possibilities of Propaganda

Greta Thunberg had tweeted about a ‘toolkit’ whereby the PDF file she shared read, “Solidarity with Indian Farmers Twitter Storm’. The file shared a ‘plan’ about hashtags, people involved in it, letters to be written to British MPs and even ‘suggested tweets’ and images that could be used as a part of the tweetstorm.

Surprisingly, this media campaign was not called by any known organization but by ‘concerned individuals under no banner’. The file, of course, was deleted within seconds, but people were swift in taking enough proofs as evidence to substantiate the point that it was a lobby working against the Indian government. Thunberg later tweeted with another updated ‘toolkit’, but the damage was already recorded and no ‘amicable’ answer would have sufficed the suspicions that were raised. One could sense that the ‘bigger party’ behind this planned tweetstorm is determined to cause political upheaval in the Indian diaspora.

The Indian Government must cater to this issue unanimously. Discussions relating to the ‘internal matter’ of the country cannot do away without China. India’s integrity has always been affected by its neighbouring country’s policies and actions. Recently, an article published in the NewsWeek mentioned how China has been leveraging and moulding its influence over Hollywood. So, could there be a possibility that the social media unrest over the farmers’ protest is being manoeuvred by Chinese influence? It won’t be astonishing even if the speculations turn out to be true.

The matter over the protests has created a sensation of resentment and betrayal from the government. The lawmakers must realize that for a democracy to function it must know situations where the need to be thick-skinned and thin-skinned is required. It is indeed a fact that whatever may be the outcome of the protest, there are only two stakeholders involved; the farmers and the government. All these tweets, irrespective of the individual and organization are mere commentators and spectators of the long-drawn battle forged between the two stakeholders. Although negotiations have been underway, the protest must not lose its intrinsic nature and the government must also remind the citizens, administration and policymakers that criticism can be taken constructively and not brand such incidents as ‘propaganda’. Even if there could be an image luring in the background of third-party involvements, the Government has to rework its machinery to produce a just equation and disassociate the third party entirely.

Democratic institutions must always remain for, of and by the people.

A parallel opinion was shared by the Embassy of the United States in New Delhi, today. The statement called for the Indian government to resume talks with the farmers’ union and understand the crisis at hand. However, the statement came in support of the government, mentioning that this will revolutionize the Indian agricultural market and bring in efficiency for the sector.

As the farmers’ protest intensifies, the world will keep an eye on what is branded as ‘the world’s largest democracy’ to negotiate and deliver the justice petitioned by the farmers.