Tunisia: Is the country reviving ‘Spring’ this winter? 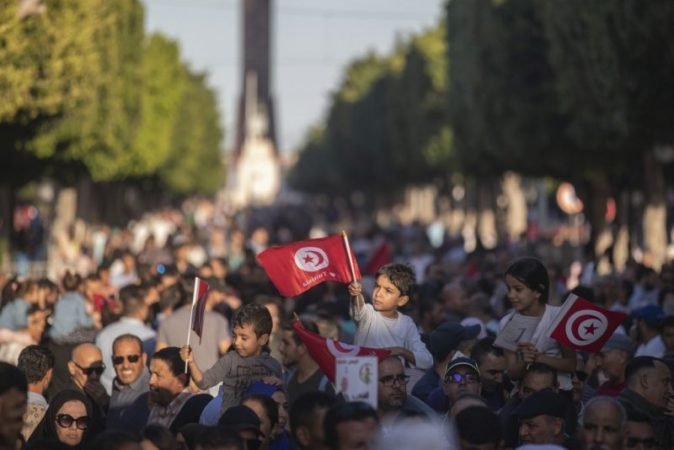 The revolution that began with a single act of self-immolation and led to one of the greatest revolutions in the modern history of Arab nations marked its decadal anniversary this January. But the scenes have not changed as they were expected to back in 2011. Tunisia is presently witnessing a massive conflict between its people and police forces. Students and working-class stormed the capital demanding immediate government attention towards the dejected condition of their survival with hunger, inflation, and unemployment. Coincidentally, back in January 2011 similar outcry against the then incompetent and corrupt governance was raised by the people resulting in the overthrow of long-term President Zine El Abidine Ben Ali. However, it is up for question how far the lives of the citizens have progressed and prospered since the ambitious revolution. Those on the margins have been further pushed down the periphery, the adult population is facing crippling disappointment in the face of the unemployment crisis and lack of decent work. Thousands of young protestors have been detained by the police and severe police brutality is being meted out to them.

The history of Tunisia dates back to the Punic Empire in 814 B.C. Known for trade and commerce, the Empire became a strategic location in the Mediterranean. Eventually what followed in the 7th century was an Arab-Muslim civilization and it prospered tremendously with arts and literature becoming a focal point. The Turkish Ottoman Empire enveloped Tunisia under its wings in the 16th century. Later, with the growing European influence and colonization across continents, Tunisia became a site for conquest and victory for different European powers, and in the 19th century, it became a French protectorate until 1956.

The quest for freedom

The French monopoly over Tunisia ended in 1956 and Habib Ali Bourguiba who was hailed as the leader of the independence movement became the President. He declared Tunisia a republic in 1957. Tunisia’s first constitution was adopted in 1959 with the establishment of a presidential system of governance. The country underwent some positive changes especially tackling unemployment, emphasis on education, and women empowerment. But the winds of freedom and liberty did not sustain for a long and the wheels turned towards a dictatorship. President Bourguiba elected himself as the ‘President for life’ in 1974 by amending the constitution and banned all opposition parties.

In 1987, Ben Ali came to power with the promise of improving the situation and ensuring democracy. He abolished the title of ‘President for life’ and was re-elected multiple times due to his popularity and policies. But once again, the people of Tunisia were betrayed and felt robbed by the government of their civil liberties and expression. The rampant corruption and expulsion of political freedom forced the people to protest and which was the beginning of Arab Spring. President Ben Ali fled the country seeking refuge in Saudi Arabia. Ben Ali’s era proved to be even more dangerous and disastrous than the previous Bourguiba regime.

The revolution of 2011 was a harbinger of hope and rejoice among the people. The newly democratized state was expected to bring fundamental changes in the roads and lives of people. The reasons for ongoing protests in Tunisia and that for the revolution 2010-11, remain the same. The country continues to struggle with intense corruption by government officials and the masses face shrinking employment opportunities and economic stagnation where people face difficulties to buy regular commodities. Popularly called the ‘Jasmine Revolution’, the protests promised to change the landscape of the rotting state of economy and politics. A little spark of fire in the small country of Tunisia enveloped the Arab region and similar demonstrations were held in countries like Egypt, Yemen, Syria, Bahrain, and Libya. This episode in modern Arab history is called the ‘Arab Spring’.

Truth and Dignity Commission in 2019 highlighted the nexus of power and abuse that have over the last few decades expelled human rights in Tunisia. The government officials along with the former Presidents Habib Bourguiba and Ben Ali tortured maimed and persecuted thousands for opposition and dissent. It outlined that sexual and physical abuse was also extended to the family members of opposition members, especially their wives and daughters.

The people of Tunisia have faced repeated violations of their trust in the governance system. The joy of revolution has left people’s faces and the landscape is starkly different today. The masses are questioning whether the revolution brought about any positive changes to their lives and whether the demands of the protests were honored. The unemployment rates have been consistently high, the young population is in abysmal condition looking at the state of corruption and abuse of power. Those in power are the elites and sycophants who are unleashing draconian measures to deal with dissent through a police state. In October 2020, a draft law was presented in parliament that would give unconditional power and sanction the use of lethal force at the hands of the security forces to protect security buildings. Amnesty International has called for the rejection of this bill and outlined that under international standards ‘the use of firearms solely to protect property this prohibited’. Many national civil society groups have severely opposed the bill since it was first proposed in 2015. Tunisia has been criticized on various fronts by Humanitarian groups for undermining people’s rights and formulating laws that deter from the path of a functioning democracy.

Now, the question remains has democracy failed in Tunisia? Or have the greedy and abusive governance system in the country failed democracy?

To the Tyrants of the World

This poem was written in the 1920s when the French ruled over Tunisia and it became a powerful slogan during the 1956 independence struggle and the Arab Spring protests.

Lover of ruin, enemy of life!

You mock the anguish of an impotent land

Whose people’s blood has stained your tyrant hand

And desecrate the magic of this earth,

Sowing your thorns, to bring despair to birth,

Patience! Let not the Spring delude you now,

Where winds are rising, and deep thunders lurk;

When the weak weeps, receive him not with scorn—

Who soweth thorns, shall not his flesh be torn?

Wait! Where you thought to reap the lives of men,

The flowers of hope, never to bloom again,

Where you have soaked the furrows’ heart with blood,

Drenched them with tears, until they overflowed,

A gale of flame shall suddenly consume,

A bloody torrent sweep you to your doom!

Translated into English by AJ Arberry

Ankita Chakravarty is currently pursuing a Masters in Labour Studies and Social Protection from Tata Institute of Social Sciences- Guwahati.