After Serbian-Kosovar Deal, could Saudi normalize relations with Israel next? 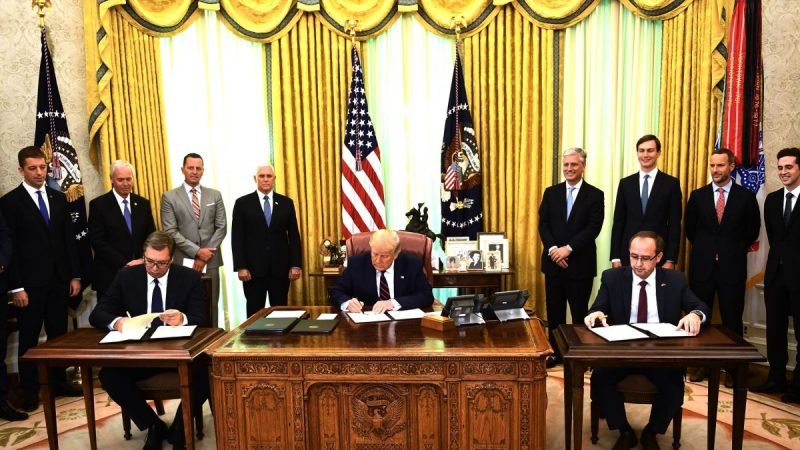 For the first time in decades, has Israel seen so many foreign policy achievements in such a short period of time. Undeniably, many of these come through the US, for which President Donal Trump no doubt takes credit, hoping it will positively impact his re-election campaign, appeasing the Jewish and more conservative voters. After the Abraham Accords, where both the UAE and Bahrain formally recognised Israel, the world awaited who would recognise Israel next, as promised by the Trump administration. This next deal did come, in fact, less than a month after the signing of the Abraham Accords, except not from the Middle East, but from the Balkans. As part of another effort by Washington to play middleman, Serbia and Kosovo now also signed deals, although separate, and vastly different from the one signed by the gulf states.

Abraham Accord: In Conversation With Ambassador Yoram Ettinger

The deals significantly recognise Israel, with a key focus on moving their embassies to Jerusalem from Tel Aviv, in an attempt to have Jerusalem formally recognised as Israel’s capital. This deal, beyond its implications for the tensions between Serbia and Kosovo, primarily singled out American commitment to Israel’s international recognition, and also indicated some truth in Washington claiming that there are more deals on the way, as they have proudly claimed. Despite much conjecture, many also expect Saudi Arabia to follow suit in recognising Israel, especially because Bahrain- a close ally- has done so and due to it’s close relations with the US. Washington of course, would warmly welcome this, but many in the region are sceptical of this due to Saudi Arabia being the religious head it is, as well as the Saudi King Salman bin Abdulaziz al-Saud’s position to first solve the Israeli-Palestinian issue, and only then establish ties with Israel. There is much to be explored in the capacity of what exactly the Serbian-Kosovar deals have realistically achieved, for the Balkans and for Israel, and if Saudi Arabia can really be one of the Middle Eastern states to follow its fellow GCC members.

How significant are the recent Serbian-Kosovar deals for Israel?

The tension between Serbia and Kosovo has been an ongoing issue for the international community ever since Kosovo unilaterally declared its independence in 2008. Kosovo has since then focussed gaining international recognition as an independent state. The EU has played an integral part in trying to abate the tensions between these two states, as Serbia still does not recognise Kosovo, and both countries seek EU membership. The latest development in relations between these two states however has been the deals they signed on the 4th of September 2020, at the White House. The Trump administration claims this deal is “historic” and a “major breakthrough”, because it got the two nations to commit to economic normalisation, something that has been the victim of failed negotiations for years.  Yet, among efforts to stabilise Serbian-Kosovar relations, the US has also achieved some of its own foreign policy goals by including Israel in the deal. Despite President Trump posing as the successful negotiator and source of meaningful deals, the Serbian-Kosovar deals realistically do little for peace in the Balkans itself, but a great deal more for Israel, much to the approval of President Trump and his close ally, Israeli Prime minister Netanyahu. As for the Balkans, firstly, the deals signed were with the US, not with each other. Secondly, the deal signed has only established some economic ties between Serbia and Kosovo, in no way suggesting the easing of any of the existing political tensions. Serbia did however promise to stop its campaign of “getting countries to “derecognise” Kosovo for one year, while Kosovo promised to stop applying for membership of international organisations, also for a year.” This in the long term, doesn’t achieve much for Kosovo, a nation trying to gain more international recognition. Finally, through these deals Washington also got Serbia and Kosovo to designate both Hezbollah’s military and political wings as terrorist organisations– a goal that the US has been trying to achieve with all European countries for some time now. Evidently, if considered closely, these deals have done little monumental work in terms of solving the Serbian-Kosovar issue as it claims. This is simply because it doesn’t address any major political issues which lie at the root of the tensions between these two states. Instead it definitely has helped US ambitions in terms of marking Hezbollah(an openly anti-Israel organisation) a terrorist organisation, and has furthered the cause of gaining international recognition of Jerusalem as Israel’s capital, which has been an American goal since they themselves moved their embassy there in 2018.

Except, a deal that appears to be benefitting Israel the most, is beginning to unravel in that department as well. Through the deals signed, Serbia and Kosovo committed to move their embassies to Jerusalem, following only the US and Honduras who have done so yet. However, Serbian leaders have already made comments a few days after signing the deal that they are unwilling to immediately relocate their embassy to Jerusalem, their main point of contention being Kosovar recognition. A Serbian source stated that “Diplomatic relations with Kosovo are one thing, recognition as an independent country is another thing entirely. This would destroy the Israel-Serbia relationship.” This came after Israeli Prime Minister Netanyahu said that Israel would establish diplomatic relations with Kosovo and welcomed its decision to open an embassy in Jerusalem. Serbian officials however condemn this and have made clear that they will not open their embassy in Jerusalem if Israel recognises Kosovo as a state. Nonetheless, as of September 4th, Netanyahu already made his stance clear when he said “Kosovo will be the first Muslim-majority nation to open an embassy in Jerusalem. As I said in recent days the circle of peace is expanding and more nations are expected to join.” This was followed by Kosovo’s President Hashim Thaci tweeting that he welcomed Prime Minister Netanyahu’s announcement and looks forward to genuinely establishing relations.

Serbia’s contention with this, made known in the following days was a surprise, and remains yet to be resolved. Thus, Israel now essentially needs to choose between maintaining relations with Serbia or forming new ties with Kosovo. More than ever, this unravelling gives us a glimpse of how much diplomatic headway this deal has realistically made for the Balkans, where despite the new deal, Serbia doesn’t want to recognise Kosovo, or have any allies to do either. Instead, by including Israel in this deal, President Trump has put Israel in the midst of this regional tension, leaving Israel with some key decisions to make.

Is Saudi Arabia next in line to normalise relations?

Beyond the recognition Israel might gain from two new potential embassies in Jerusalem, US ambassador the UN Kelly Craft mentioned on Wednesday that another Arab country is expected to sign a peace deal with Israel very soon. She added “I know others are going to be following,” and that “We will have more being announced very soon,” President Trump also mentioned that he has never been more optimistic about the future of the Middle East. Given the Bahraini addition to the Abraham Accords, many have been intrigued by the extent of Saudi support to this series of normalisation deals with Israel as well as their potential willingness to normalise relations themselves. It is a well-known fact that the Saudi crown prince, Mohammed bin Salman al-Saud is eager and ready to normalise relations with Israel. Sources have made clear that the matter of Riyadh recognising Israel is no longer a matter of if, but when. However, as of now, the biggest obstacle to this remains the current king of Saudi Arabia Salman bin Abdulaziz al Saud. The monarch has continued to hold his anti-Israeli position and has made it plenty clear that he first wants a resolution of the Israel-Palestine conflict. He told Al-Arabiya in an interview that a just solution needs to be reached giving the Palestinian people an “independent state with East Jerusalem as its capital,” but still praised President Trump’s efforts to build peace. Thus, despite efforts by the Trump administration and Israel, Saudi Arabia may only normalise relations, when its ruler is keen to do so, and that may very well be when the current crown prince Mohammed bin Salman al-Saud becomes the Saudi monarch himself. However, it is notable that the current Saudi monarch has delegated a sizeable amount of governing authority to his son, the crown prince already, which makes predicting Saudi Arabian moves toward Israel slightly more unpredictable. Regardless, Saudi Arabia and Israel continue to share under the table deals in terms of security, but the nations officially establishing relations remains questionable. This comes mainly due to the status Saudi Arabia holds in the Arab world, with its vast oil reserves and Islamic pilgrimage sites- also making it increasingly valuable to Israeli international recognition for the same reasons.

Thus, although Israel has made great progress in achieving wider international recognition, it still has considerable work to be done, especially with regard to the issue of Palestine. The new deals signed by Serbia and Kosovo, although lauded by President Trump, are somewhat ambiguous in their immediate benefit to Israel, simply because of tensions between Serbia and Kosovo, and Israel now being involved in that because of the choice it needs to make. As for Saudi Arabia, despite past un-official relations and the Crown prince’s growing warmth towards Israeli Prime Minister Netanyahu, the official normalisation of relations seems unlikely, due to resistance of the current King of Saudi Arabia. No doubt the US is keen for its key Middle Eastern ally, and regional hegemon to sign a deal with Israel, but due to these very factors, Saudi Arabia is no doubt being increasingly careful and evaluating public opinion first.