A regional tug of war and unconventional allies 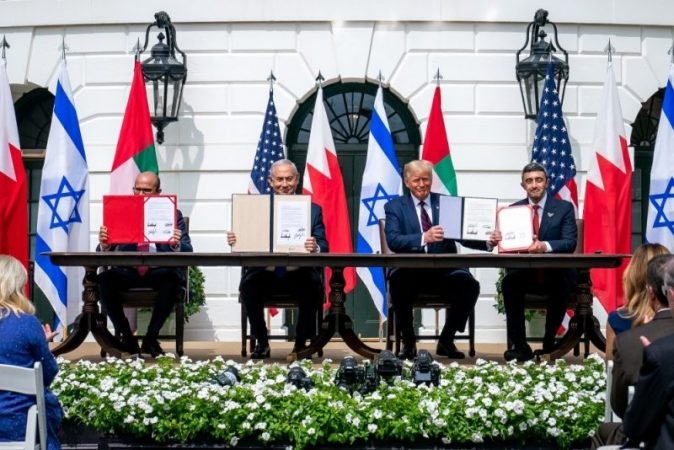 The Abraham Accord, a deal between Israel, the UAE and Bahrain, brokered by the US, has undoubtedly ruffled some feathers in the Middle East, but it has also opened up new windows of opportunity. After years of Israeli isolation, the Emirati and Bahraini states have now joint Egypt and Jordan in normalising relations with Israel. Undoubtedly this deal is a significant strategic repositioning of the Sunni Middle Eastern states. However, what begs to be explored is how this influences the balance of power in the region, especially where conflict is at every corner and the balancing act of states is critical. Thus, amongst other things, this accord stands out for its ability to shift the Middle Eastern balance of power. Significantly, it strengthens the ‘Sunni bloc’ led by Saudi Arabia against Iran by including Bahrain, a state close to Saudi policy indirectly indicating their approval and consisting of a majority Shia population. It also brings Israel into the role of a potential regional player, bolsters the UAE’s regional position.

Buy: A History of the Middle East: 5th Edition

At present, the Middle East is broadly split into two blocs, the Sunni and Shia bloc, led by Saudi Arabia and Iran respectively, each finding the other equally threatening to their interests and national security. Both are eager to seek the upper hand in the region by having maximum areas of influence. Since the Sunni bloc consists of a majority of Arab states, including all the GCC members, the Shia bloc is left with few state allies and hence turns to non-state actors and proxies in the region such as Hamas and Hezbollah with their presence in Syria, Yemen and Lebanon. Yet, with Tehran gaining a considerable foothold in various regional conflicts and seeking other allies such as China, the Sunni bloc feels increasingly insecure and willing to explore ways to tip the balance of power in their favour.

Alliances are most often formed to resist some sort of threat. When forming these alliances countries are either trying to balance, allying to resist a common threat, or bandwagon, allying with the greatest threat. The Abraham Accord is a stellar example of a balancing alliance, where countries are allying themselves against a common threat. In this case, not just any ally, but one that has historically been side lined in the region due to the Palestinian question. Israel, the UAE and Bahrain all see Iran as a growing concern and threat to their security, and so ally against the large Shia state. The danger posed by Tehran has brought the Arab gulf states to prioritise their security concerns over supporting the Palestinian cause. The joint statement issued by the United States, Israel and the United Arab Emirates clearly mentioned “many common challenges” that all three countries face. One of these definitely naming the challenge posed by Tehran, serving as a common point of contention and alliance, regardless of previous disagreements.

US role and necessities

It is also important to point out the American role played in the brokering of this accord, which is of unique importance to the US as it strengthens the regional position of its key allies and threatens the traditionally anti-western Islamic Republic. A stronger Sunni bloc with the inclusion of Tel Aviv, guarantees Washington’s interests in the region. Another timely benefit of this diplomatic accord serves the Trump administration. With the upcoming American national election this foreign policy victory of the incumbent strengthens the Republican campaign. Jared Kushner has stressed how President Trump’s “untraditional approach” has brough about a solution saying that “You can’t solve problems that remain unsolved by doing it the same way the people before you have tried and failed.” Professor Eytan Golboa from the Begin-Sadat Center for strategic studies also agrees that “Trump doesn’t have any foreign policy achievement. This is probably the only one he has.”

Additionally, it brings the United States closer to the UAE. Many democrats are sceptical of Saudi-Emirati closeness, as well as its involvement in Yemen and human rights issue in the country- and still support reducing American involvement in the region. However, this accord helps maintain American-Emirati relations and dispels calls to change this partnership. The UAE is also one of the biggest importers of American military equipment in the region, along with Israel. Therefore, aiding President Donald Trump’s re-election is beneficial to the UAE, Israel and Saudi Arabia, who are all in favour of no American engagement with Iran. The joint statement further solidifies this by revealing that “Israel and the United Arab Emirates will join with the United States to launch a Strategic Agenda for the Middle East to expand diplomatic, trade, and security cooperation.” Clearly, pointing to greater regional interdependency and closer cooperation on key aspects.

Buy: The Israel-Arab Reader: A Documentary History of the Middle East Conflict

The Kingdom of Bahrain is definitely one of the smaller Arab nations in the region, but its historic ties and close relations with Saudi Arabia make its consideration with regard to balance of power. Notably, Bahrain has a majority Shia population, ruled by the Sunni Al-Khalifa family. Due to its Sunni leadership, the country is aligned with the Sunni bloc, most importantly, with Saudi Arabia. The two nation’s proximity is not just geographic, but also militaristic as in when required, as was exhibited during the Arab Spring protests in Bahrain, which were quelled with the help of Saudi military intervention. Given Manama’s close relations with Riyadh, many point out that Bahrain agreeing to normalise relations with Israel couldn’t have occurred without prior agreement from Riyadh. This speaks considerably regarding Saudi Arabia’s stance on Arab states ending Israeli isolation and may indicate a future Saudi-Israeli deal as well.

Bahrain signing this accord and aligning with other states against Iran tells of the Bahraini fear of a Shia uprising as well as Iranian influence not just in the region, but domestically as well. Shia uprisings in Bahrain are most often attributed to being orchestrated by Tehran in an attempt to gain influence in the country. Allying with Israel opens up opportunities for Bahrain to implement Israeli security and military equipment, theoretically increasing its capacity to supress Iranian efforts at de-stabilisation, if any.

Israel’s breakthrough in the Arab world

In order for Washington to broker this deal and create greater interdependency, Israel needed to be included in the Sunni bloc. Therefore, as much as the Abraham Accord may seem to be bringing peace to an increasingly combustible region, it is equally seen as yet another instance of American policy being driven by the Israeli agenda. Undoubtedly, the normalisation of relations brings a wide range of advantages to the historically isolated state especially in terms of national security.

One of Israel’s biggest threats in the region comes from Iran, and Hezbollah in its neighbour Lebanon which Iranian officials refer to as “our southern border” or “our border with Israel.” With a much stronger and allied Tel Aviv, due to its new alliances with the Arab Gulf, Tehran’s influence through Hezbollah might become a lesser threat to Israel. In the joint statement the US and the UAE have pledged to work together to assist Israel in restoring relations with other Arab nations as well, which is something Prime Minister Netanyahu has been committed to doing.

Furthermore, along with being a win for President Trump, this is also a huge foreign policy achievement for Prime Minister Netanyahu. Along with successfully normalising relations with some Arab states, Tel Aviv has also proved to be able to do so without solving the Palestine issue. This may very well lead to increased resistance to reaching an agreement in the future or bolder claims and further annexation- overall a tougher position regarding Palestine, making the crisis tougher to resolve and Israel eventually gaining the upper hand in negotiations. Indirectly, the accord may have realised yet another one of the Netanyahu government’s goals.

Israel may also be expanding its reach into Africa, where it has long sought recognition. The success of the Abraham Accord and recognition from Arab states could bolster African states to also embrace Israeli business. There have been reports of peace talks with Sudan, which has traditionally been far more hostile to Israel than the UAE, even supporting Hamas and Hezbollah against Israel. Such new alliances will help Tel Aviv at international bodies like the UN, provide new markets for businesses and advance international recognition.

Yet, along with bolstering Israel’s interests, the Abraham Accord works similarly for the Emiratis. The UAE being the first of the Gulf Arab states to normalise relations with Israel speaks volumes for its regional role in the future. Although Saudi Arabia remains the religious head, the Emirates have the potential to lead the way in other aspects. The opening of the Arab world’s first nuclear power plant, Barakah, as well as increasing investment in R&D and military production shows signs of the Emirates becoming a strong contender in the run for regional leader. Building on closer ties with the US and strengthening their security and military equipment through deals with Tel Aviv can help Abu Dhabi play a more autonomous role in the region as well. The Arab state may choose to play a more significant role in regional conflicts such as Yemen and promote more of its own agendas. Abu Dhabi has also pledged, along with Washington, to support other Arab states in allying with Israel- playing the role of a regional head in this matter, and perhaps others in the future. Albeit Saudi Arabia is still the de facto leader of the Sunni bloc and the GCC, it is still worth considering if the UAE can gradually step into this role, replacing Riyadh.

Beyond considering the regional advantages for those involved in the Abraham Accord, it is also critical to consider repercussions of the accord, mainly, regional responses to it. The most obvious candidate would be Iran, now feeling increasingly uncomfortable with its regional isolation. The Republic is already in talks with China over a hopeful strategic partnership, as part of its “Look East” policy. China has been wanting to expand its role in the region previously, and what better way to do so than by dealing with an American adversary. Turkey has also made its discontentment with the accord known, threatening to suspend ties with Abu Dhabi over this deal. Consequently, although the Sunni bloc may currently be at an advantage and creating new regional leaders, there is already a new challenge to their goals with the emergence of a bloc against the Abraham Accord itself.