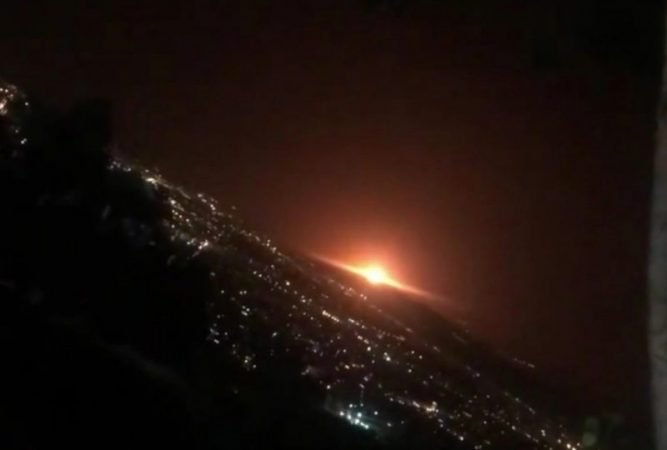 EXECUTIVE SUMMARY: Three incidents, including two explosions at nuclear facilities, have shaken Iran in recent days. Were they connected? Were they caused by accidents or were they carried out by a foreign power? If the latter, were they executed via cyberattack? And what will be their domestic and international implications?

Early in the morning on June 26, Tehran was rocked by a huge explosion at the Parchin military complex, 30 kilometres southeast of the Iranian capital. Some media outlets attributed the blast to Parchin’s role in the development of nuclear weapons, which were reaffirmed when Iran’s secret nuclear research archive was smuggled to Israel and exposed in 2018. The regime’s choice of Parchin as the site at which to conduct nuclear experiments was probably due to the fact that ammunition, explosives, and solid rocket fuel were produced there.

As early as 2012, the International Atomic Energy Agency (IAEA) asked the Iranian authorities to allow its inspectors to tour Parchin following information it had received about nuclear activity at the facility. Its request was rejected. The Iranians then demolished the buildings where the suspect activity had allegedly taken place and even razed the area around them.

In September 2015, after signing the JCPOA nuclear agreement, Tehran finally allowed IAEA inspectors to tour the area and take soil samples. Despite the regime’s thorough sanitizing of the site, anthropogenic (human-processed) uranium particles were found that could only have been produced during “cold test” explosions of nuclear devices.

Since then, as far as is known, there has been no nuclear activity at Parchin. It is therefore likely that the June 26 explosion was a detonation of explosives and/or solid rocket fuel. According to satellite photos and eyewitness testimony, the effects of the blast are spread over a half-mile area that is networked with many underground tunnels.

The area in question belongs to the Khojir plant, which produces solid fuel for Fajr rockets, cruise missiles, and Iran’s 2,000-mile Sajil ballistic missile. An Iranian Defense Ministry spokesman minimized the significance of the incident and claimed that an industrial gas tank had exploded without casualties.

Five days later, another blast occurred, this time at a clinic at Sinai Athar Health Center in northern Tehran. This explosion, which completely destroyed the clinic, killed at least 19 people, most of them women. According to the Iranian authorities, the disaster was caused by oxygen balloon leakage.

The next day, a fire broke out at Iran’s main uranium enrichment plant at Natanz (the site targeted by the Stuxnet computer worm in 2011). As it did for the previous incidents, the regime understated the extent of the damage at Natanz. The spokesman for the Atomic Energy Organization of Iran, Behruz Kamalvandi, claimed a fire had broken out in an “industrial shed that was under construction” and said it had resulted in no casualties or environmental pollution.

American experts claim, however, that their satellite imagery identified the damaged structure as a workshop for the production of state-of-the-art uranium enrichment centrifuges. Contrary to Iran’s claim that nothing occurred at the site besides fire, the photo of the damaged structure displayed by the Iranian Atomic Energy Agency shows rubble and a door off its hinges, indicating that the fire was likely accompanied by an explosion.

While the blast at the clinic was probably an accident, the other two incidents were generally assumed by the international media to have been committed by Israel and the US, possibly as part of an ongoing cyber war with Iran. There are a number of reasons why this may well be the case: the failed Iranian cyberattack on Israel in April, which was intended to increase the amount of chlorine in Israel’s water infrastructure with the object of poisoning or sickening Israeli civilians en masse (an attack to which Israel allegedly responded via a cyberattack on the Iranian port at Bandar Abbas); Iran’s significant progress in developing uranium-enrichment centrifuges and production of enriched uranium quantities in contravention of the 2015 nuclear agreement; and clashes between the US and Iran in the Persian Gulf. It has also been speculated that the attacks are US retaliation for the failure of the Security Council to extend the arms embargo on Iran.

Whatever the case, these incidents occurred at a particularly inopportune time for the Tehran regime, which is struggling to cope with an economic collapse and sharp currency devaluation due to US sanctions; the coronavirus pandemic, which is taking a heavy toll on the Iranian people; and Iran’s military failures versus the IDF in Syria.

Lt. Col. (res.) Dr Raphael Ofek is a BESA Center Research Associate, is an expert in the field of nuclear physics and technology who served as a senior analyst in the Israeli intelligence community