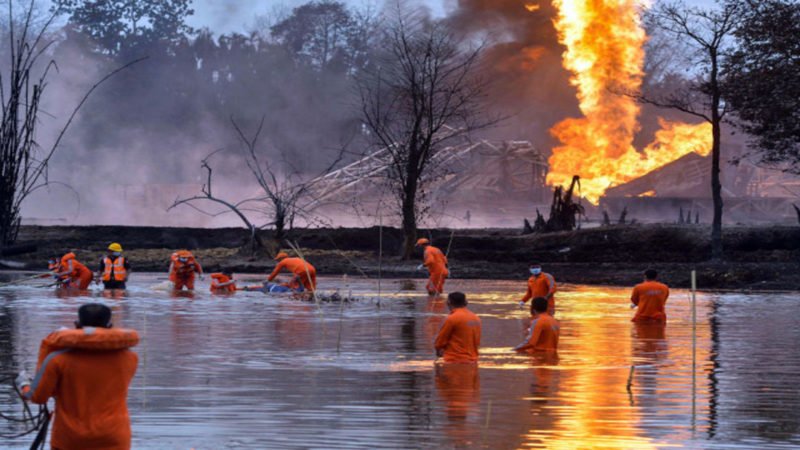 On 27th May, a sudden and massive fire broke out at an oil well in Baghjan village in Assam’s Tinsukia district making it the latest in the series of industrial disasters in India. It became very active while workover operations were on leading to the uncontrollable release of natural gas. Immediately possible efforts were taken to control the situation, operations suspended, families were timely evacuated to safer places under the supervision of Oil India Limited and Tinsukia District Administration. A similar kind of gas leak was witnessed in Vizag nearly a month ago affecting so many lives. And this blowout has questioned the concern over the environmental measures taken by the government and also have raised human concerns over ecology and biodiversity.

Baghjan village where the oil rig is located is situated next to the protected Dibru Saikhowa National Park and Maguri Motapung Beel wetlands, which is home to numerous species of migratory birds, rare wildlife and aquatic species. This points out that the oil rig is situated near rich biodiversity. This blowout and gas leak has done a lot of damage to this rare biodiversity as well as to the local agriculture. The rivers flowing into the region have been contaminated due to the explosion leading to deaths of aquatic species. On this World Environment Day, we celebrated biodiversity and took an oath to protect our environment, but these kinds of disasters have pushed the entire human race to introspect about our activities and have warned as to how are we going to change our behaviour towards the environment in the near future.

Not just the environment but the local people living in these areas have been affected a lot. They have complained of headaches, itching in eyes, blockage of nasal passages, various respiratory problems after this blowout. Locals have been evacuated from the site and have been displaced into relief camps by the concerned authorities. This problem had become graver because of the Covid-19 restrictions as well. People living in the COVID relief camps had to evacuate their places as soon as possible. As the impact spread, the National Disaster Response Force was called and 2,500 people were taken to relief camps. Last month, Oil India Limited received environment clearance from the environment ministry to carry out drilling and testing of hydrocarbons in seven locations under the national park. The decision was met with an uproar from the locals and environmental activists before the accident took place and now this decision is being criticised by the locals as well as by the activists even more.

This oil spill has raised the questions over the livelihood of people. As there would be probable impacts on local occupations. People engaged in farming would face fertility issue of land as the land had been contaminated. People who earned their livelihood through fisheries are now left with no option as the water bodies are polluted and aquatic species have died in numbers. Those who are involved in animal rearing have been majorly affected too. This is not just an environmental crisis but has turned to be in an employment crisis for the locals. This poses our attention as to how many years would it take to revive these structures and bring everything back to normal.

While Baghjan has been the most affected by the blowout due to its proximity to the well, villages located further downstream like Notungaon, Milanpur, Hatibagh, Bebejia and Barekuri have also suffered. Droplets of condensate (which is the residue from gas condensing after coming in contact with water) have reportedly spread up to a radius of 5 km, falling on trees, tea gardens making them unsuited for the markets, grasslands, water bodies, and on the roofs of houses making it more difficult for people living there.

To safeguard the environment, OIL has engaged a NABET accredited consultant to carry out Environment Impact Assessment Study in and around Dibru-Saikhowa National Park, Maguri Motapung Beel and the surrounding villages to assess the effects of a blowout on terrestrial and aquatic ecosystems and Socio-economic Assessment. Further OIL has engaged local fishermen to identify oil spill in Maguri Motapung Beel so that immediate action may be taken. OIL workforce has been continuously pumping water into Baghjan well since the blowout to minimise the chances of a fire from it. Along with that thin layer of condensate floating in nearby water, bodies are being picked up by using boats. Three experts of Singapore based firm – “M/s Alert Disaster Control” reached Duliajan on 8th of June to assess the situation and take precautionary measures.

The Blowout well caught fire on 9th of June while the clearing operations were on at the well site. Two OIL employees from fire services Durlov Gogoi, Assistant Operator and Tikheshwar Gohain Assistant Operator have lost their lives during the fire. After the incident occurred there were violent protests around the well site by the local people and people in the affected surrounding areas were accommodated at 12 relief camps at a safer distance with arrangements of food and accommodation, lighting, hygiene, toilet and medical requirements. The extent of the fire and it’s spread to the nearby village has been contained to the well. No flash fire is reported and fire tenders are kept ready at the site to address any untoward incidents of flash fires in the future (Status of the well as on 11th June reported by OIL).

This year has witnessed many natural disasters from a global pandemic to locust attacks. The rich biodiversity and ecology are in danger and nature call out for an immediate collective sustainable strategy towards it not just by people but also government and industrialists.