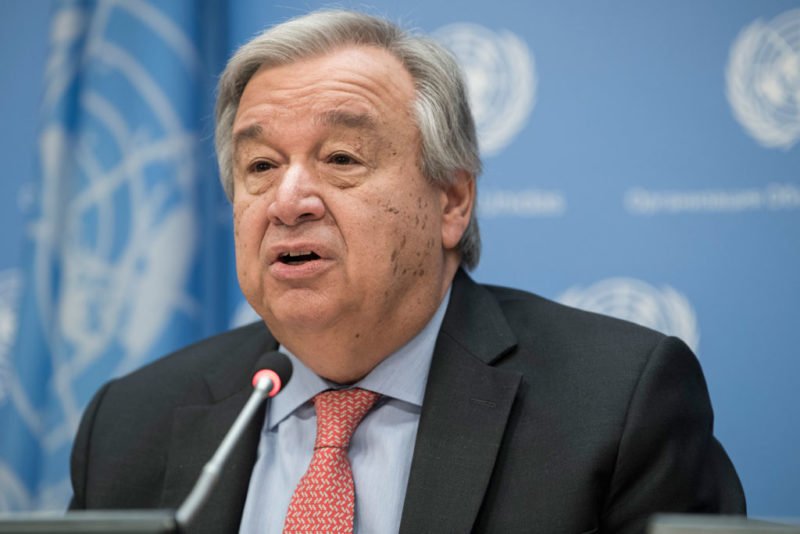 United Nations Secretary-General Antonio Guterres called women’s inequality “stupid” and a cause for global shame on Thursday, as he pledged to press governments to end discriminatory laws in the face of a “strong and relentless pushback” against women’s rights.

While Guterres did not name and shame, U.S. President Donald Trump’s administration has led a push at the U.N. against the promotion of sexual and reproductive health services for women because the administration sees that as code for abortion.

Speaking ahead of the annual meeting of the U.N. Commission on the Status of Women in New York next month, Guterres warned that the state of women’s rights was dire and said he would seek to end “default male thinking” across the United Nations.

“Just as slavery and colonialism were a stain on previous centuries, women’s inequality should shame us all in the 21st. Because it is not only unacceptable; it is stupid,” Guterres said in a speech to The New School in New York.

He said legal protections against rape and domestic violence were being diluted or rolled back and that in 34 countries rape within marriage was still legal.

“There is a strong and relentless pushback against women’s rights,” Guterres said. “Women’s sexual and reproductive rights are under threat from different sides.”

However, the United States under Trump has pushed to remove such language from new U.N. resolutions. The Trump administration also cut funding in 2017 for the U.N. Population Fund because it believed it was linked to an abortion program, but the U.N. said that was an inaccurate perception.

The U.S. Supreme Court ruled in 1973 that women have the right to choose whether or not to have an abortion but the issue is still divisive in the United States.

“The U.N. should not put itself in a position of promoting or suggesting a right to abortion, whether it is humanitarian or development work,” U.S. Ambassador to the United Nations, Kelly Craft, said in October.

“I find it pretty strange that the United States is mobilizing so hard on this issue … because if you look at the bigger picture is the main threat to the world today abortions? Or is it an assertive China? A Russia that is expansionist? Let’s just get our focus right here,” said a senior European diplomat, speaking with media (Reuters) on condition of anonymity.

Last year Washington threatened to veto a Security Council resolution if a reference was not cut citing the need for U.N. bodies and donors to give timely “sexual and reproductive health” assistance to survivors of sexual violence in conflict.

“Women have equaled and outperformed men in almost every sphere,” he said. “It is time to stop trying to change women, and start changing the systems that prevent them from achieving their potential.”