France and Morocco in a diplomatic stand-off 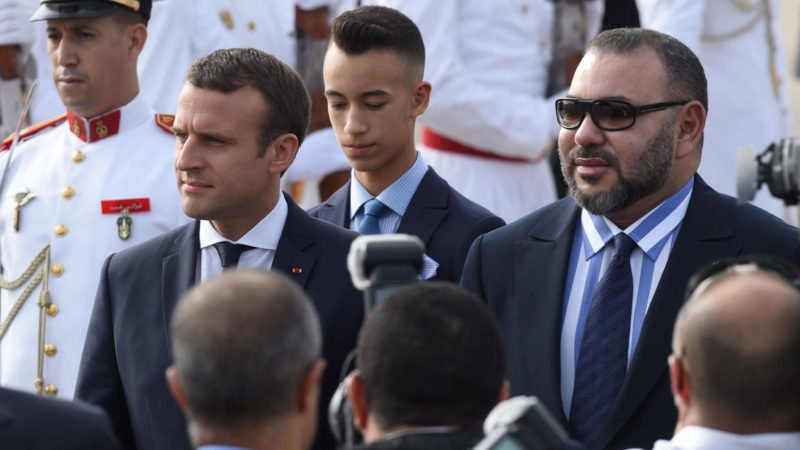 Having seen a sharp decline in its influence in Tunisia and Algeria, France is eyeing China and Spain’s growing economic presence in Morocco with concern. Is Paris about to lose its “backyard” in North Africa altogether?

For a number of months, relations between Rabat and Paris have been deteriorating into a bone-breaking fight. In recent weeks, it has turned into a veritable cold war on various fronts: political, diplomatic, economic and even in the media. A number of recent developments indicate the depth of the crisis between the two countries.

France sensed that it was about to lose another backyard in North Africa in the wake of Kais Said’s election as president in Tunisia and its weakening hold over Algeria, resulting from the revolutionary movement there and the internal turmoil. These developments have reinforced the desire among Paris’ decision-makers to maintain Morocco as a de facto protectorate, thereby allowing France to monitor closely its former colonies in the Mediterranean and in sub-Saharan Africa.

As far as pressuring Rabat into maintaining their preferential economic position in the Kingdom is concerned, the French have apparently played all their cards. Reports confirm that they have lost significant ground to regional powers such as Spain and international powers such as China.

Many observers link the tensions and the diplomatic stand-off between the two countries to France’s dismay at the news that China is expected to win the anticipated high-speed rail project between Marrakesh and Agadir. It comes after Beijing made a low-cost offer of around 50% of Paris’ bid, at a time when the French were already anxious about China’s growing interest in the deal for the second half of the project to extend high-speed train (TGV) services between Casablanca and Marrakesh.

This is a direct threat to France and its historical control over the railways market. Its monopoly was underlined in 2007 when the work to implement the first part of the Tangier – Casablanca project was given to the French company Alstom at the vast cost of U.S.$ 4 billion. This was to compensate Paris for Morocco’s withdrawal from a deal to buy French warplanes in favour of an American alternative.

Little by little, the Chinese dragon has begun to devour what the French rooster believed was his and his alone. In March 2017, the Chinese won a project to build “Tangier Tech” on a 1,000-hectare site in the north of Morocco. It is intended to become a commercial hub, hosting hundreds of Chinese companies; it will also serve as a launching pad for China into African and European markets. Against this background, China has now moved its competitive eye towards the railways.

On the other front, France is looking with great disquiet and exasperation at the increasing Spanish presence in Morocco; it too has cost it important markets in a number of areas. Spanish companies have penetrated deep within the Kingdom. For example, urban transport has become the preserve of the Spanish bus company “ALSA” in Marrakesh, Tangier, Agadir and Khouribga. The company expanded its operations last year to cover other cities, notably the capital Rabat, Sala and Greater Casablanca. Thus, Madrid has, for some years, succeeded in maintaining its own position as Morocco’s primary trading partner.

France played a pivotal role in restoring Morocco to its former ranking within the African continent; as a result, it feels the injustice of its increasing marginalisation keenly. Morocco is now the leading investor in West Africa and the second on the continent, making it indispensable for anyone wishing to penetrate Africa’s markets.

With the popularity of President Macron’s government at a record low, France has been left with a powerful desire to preserve the privileges that this would-be protectorate offers. Thus, the French government launched into a battle that has resulted in a silent crisis, in which it has employed every means at its disposal to force Morocco to reconsider.

Paris has intensified the pressure on Morocco to the point where the silent crisis has turned into a year-round spectacular. The French media, both official and unofficial (some of which are kinder to Rabat), are leading a campaign against Morocco, highlighting all the problem issues (the Rif movement, freedom of the press, social discontent, human rights etc.). In the most recent chapter of this campaign, the French news agency AFP conducted an interview with Aminatou Haidar, calling her the “Gandhi of Western Sahara”.

With regard to the Sahrawi issue, the usual meeting between the foreign ministers of the two countries did not take place on the sidelines of the UN General Assembly, for the first time. Moreover, French enthusiasm for arguing Morocco’s case on the Sahrawi issue has waned.

France has not engaged in the search for a successor to Horst Kohler, the UN’s special envoy to the Western Sahara, who resigned his post months ago. Against that background, the Spanish Prime Minister set a new precedent before the General Assembly when he defended the notion of a political solution to the Sahrawi issue. In so doing, he became the first Spanish Prime Minister to drop from his vocabulary the terms “referendum” and “self-determination”.

The French campaign against Morocco is also beginning to have economic ramifications after the French Minister of Economy called for the repatriation of French investments. According to the minister, French car manufacturing ventures in Morocco are a “failed investment model” which ought to be reviewed; it makes no sense to keep a business model in which the best-selling cars in France are made outside it. The minister called on the two French groups (ed: Renault-Nissan Alliance and PSA Group) to abandon this strategy which is destroying the French economy.

Moreover, Paris has played the political asylum card to press Rabat into reviewing its decisions. Much to the surprise of the Moroccan authorities, the French government quickly accepted the applications for political asylum of a number of journalists, activists and political dissidents. In contrast, Spain has pursued a strict policy against Moroccan asylum applications. This implied criticism on the part of the French government towards Morocco’s policies in respect of freedom of speech and human rights.

Policymakers in Morocco today realise the extent of their misjudgement in making French the language of education. Whatever happens, Paris is not likely to change its colonial attitude towards Morocco. Interests are the sole criterion for the rhythm of relations between the two countries, regardless of right- or left-wing ideology. The best proof of this is the fact that France maintains an equidistance in its relations with Algeria and Morocco, allowing it to walk a tightrope and blackmail both sides equally on the issue of Western Sahara.

The moment for Morocco to free itself from France’s clutches is more opportune than ever. There is no doubt that France is badly shaken after the decline in its influence abroad. To achieve emancipation, however, Morocco must close ranks and unite by extending political freedoms, laying democratic foundations, fighting rampant corruption and establishing social justice.

Alas, these essential prerequisites for the country’s successful liberation are absent in Morocco today.

Mohamed Taifouri is a Political Scientist