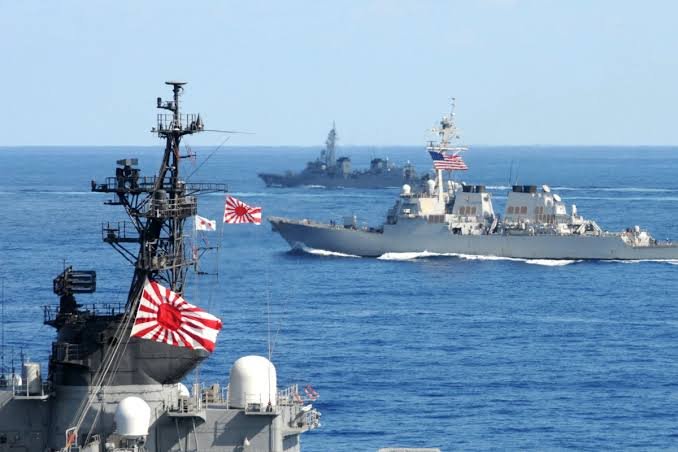 Japan has dispatched a warship to help safeguard the country’s oil supplies through the tense-but-vital waterways in the Middle East.

The helicopter destroyer Takanami on February 2 left its port near Tokyo on an assignment to protect merchant ships and oil tankers passing through the Gulf of Oman, through which flows some 90 percent of Japan’s oil.

The destroyer and its 200-member crew will operate with two P-3C maritime patrol aircraft to guard ships heading for Japanese ports, officials said.

The government of Prime Minister Shinzo Abe said it was prepared to authorize force to protect ships in danger.

The action remains controversial given Japan’s war-renouncing constitution written after World War II that forbids the use of military force to settle international disputes.

The mission will remain independent of other international deployments in the region, including one led by the United States and another by European countries.

Japan and other U.S. allies are attempting to balance efforts to show support for U.S. President Donald Trump while looking to minimizing risks of getting drawn into a larger conflict with Iran as tensions flare between Tehran and Washington.

In October, Japan announced it would not join a U.S.-led coalition to protect shipping in vital commerce lanes in the Middle East but would send its own vessels to ensure safe delivery of oil to Japan.

Chief Cabinet Secretary Yoshihide Suga at the time said Tokyo would still cooperate closely with Washington in efforts to protect oil tankers amid a series of attacks the West and Arab allies blamed on Iran.

“We won’t join the United States, but will cooperate closely with them,” Suga told a news conference. “Self-Defense Force assets will ensure the safety of vessels related to Japan.”

“Peace and stability in the Middle East is extremely important for the international society, including Japan,” he added. “After we studied comprehensively what measures can be most effective, we have decided to pursue our own measures separately.”

Several incidents in and around the Gulf of Oman, which sees around one-fifth of international oil shipments, raised tensions last year. Tehran denied any involvement in attacks on tankers.

Trump accused Iran of carrying out June 13 attacks against two oil tankers in the Gulf of Oman, including a Japanese vessel. No one was hurt in the attack, but the ships suffered damages.

Japan, which is heavily reliant on the import of oil products, has maintained relatively good relations with Tehran and expressed reluctance to join the U.S.-led force.