Taiwan stands up to Xi 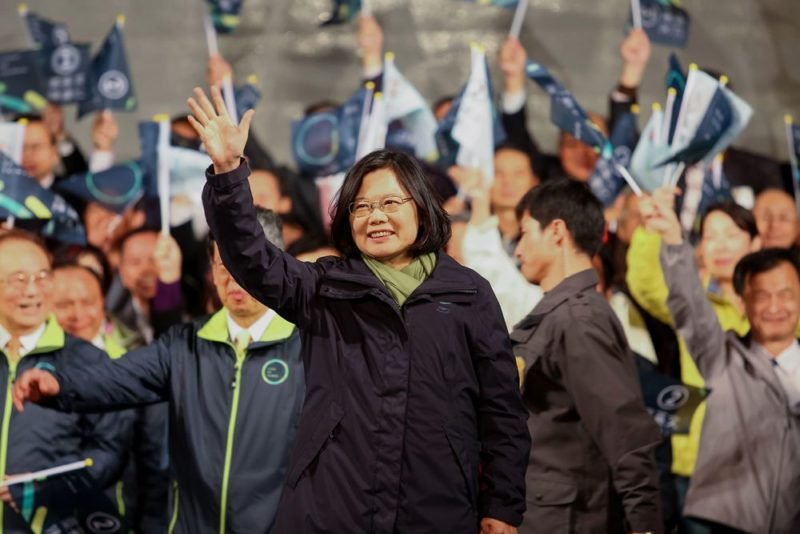 Taiwan can seem like the third rail of international diplomacy. If a country wants a good relationship with China, Beijing has effectively stated, it cannot have a meaningful relationship with Taiwan. Just this week, the city of Shanghai broke off official contacts with the city of Prague for signing a partnership treaty with Taipei. Beijing has long regarded Taiwan as nothing more than a renegade province. Under President Xi Jinping, China has systematically tried to reduce Taiwan’s international space, forcing it out of global organizations and forums, as well as increasing military and economic coercion to force it into a process of reunification.

By this measure, Tsai Ing-wen’s landslide reelection on Saturday as president of Taiwan will come as a great disappointment to Beijing. Tsai’s victory seemed very unlikely nine months ago. She was more than 20 points behind in the polls. Her party, the DPP, suffered a big defeat in midterm elections in 2018. But China’s actions in Hong Kong gave the Taiwanese a glimpse of their possible future. In his 2019 New Year’s Day message, Xi demanded that Taiwan look to the “one country, two systems” approach as a model for future relations. The Taiwanese had their worst fears about what that meant confirmed in Hong Kong and gave a resounding “No, thanks.”

Taiwan’s politics are complicated and defy the typical left-right divide. The DPP has traditionally favored formal independence, although Tsai is cautious and has made it clear she will not take any steps in this direction that could give Beijing a pretext for an invasion. Her government is focused on preserving Taiwan’s practical autonomy and freedoms. The other party is the Kuomintang (KMT), which extended its rule over Taiwan after losing the Chinese civil war to the Communists. The KMT favors closer ties with Beijing and eventual reunification, albeit on very different terms to those proposed by Xi. Young people in Taiwan have no emotional attachment to the past and want to preserve the only way of life they have known.

Beijing made its feelings known quickly. Commenting on the election, Wang Yi, China’s foreign minister, said the “international consensus” on “the one-China principle,” which holds that “Taiwan is an inalienable part of China’s territory … will not be affected in the least by a local election.” “Those who split the country will be doomed to leave a stink for 10,000 years,” he said. The Global Times, a newspaper operated under the auspices of the Chinese Communist Party, called for “a plan to crack down on Tsai’s new provocative actions, including imposing military pressure, which is an unbearable option for Taiwan authorities.”

The big question hanging over Taiwan now is how Beijing will react over the next four years. I spent the past five days in Taipei with a small group of Americans and Australians to observe the elections. We also had an opportunity to speak with Tsai and other senior officials.

“We need to be candid,” Tsai told us. “If we are vague, Beijing may misjudge the situation. In the past, people have gotten concerned when we are direct, but the situation has changed. We need to be direct to prevent misjudgment.” Tsai reminded me of Angela Merkel. A 63-year-old academic, she is both principled and cautious. “We must be clear, but not provocative; loud, but careful,” she said.

Taiwan officials told me that more than 70 countries had sent messages of congratulations to Tsai and the people of Taiwan on the election, including Secretary of State Mike Pompeo. They said the messages were longer and arrived faster than in previous years. This may seem like a small thing, but in a place where protocol is often seen as a matter of survival, it mattered. The officials pointed in particular to Europe, where they said they had witnessed a sea change in recent years. As European countries experienced direct pressure from China on a variety of fronts, they have seen Taiwan in a new light.

Taiwan officials believe that Xi miscalculated on Taiwan. He saw that Tsai was politically vulnerable and sought to increase pressure, but it had the opposite effect. Xi has decades of experience in dealing with Taiwan and sees himself as the expert in chief. Now that his judgment has been revealed to be fallible, the question is whether he will be impatient and seek to achieve unification through coercive means, or whether he has enough on his plate. Taipei hopes that Xi will reach out to Tsai to ease tensions. The officials pointed out that Tsai is not an ideologue. If China does not deal with her now, it may have to deal with future leaders who they will perceive as more difficult. There is no prospect of leaders who will engage on the one country, two systems idea, even if the KMT were to make a comeback.

But Taipei is not counting on Xi having a change of heart. Instead, officials are preparing for a prolonged pressure campaign. Although the military threat grabs headlines, Tsai’s government’s main foreign-policy goal is to halt and reverse its diplomatic isolation. Taiwan officials see the Trump administration as a stalwart ally in this regard. The U.S. has increased official engagement and approved the sale of fighter jets. Taipei hopes to move toward a free-trade agreement and is willing to offer good terms. However, President Donald Trump remains a wild card. For instance, Trump complained bitterly after a mid-ranking State Department official, Alex Wong, visited Taipei to demonstrate U.S. solidarity, because he worried that it would infuriate Xi.

Support for Taiwan is likely to remain a bipartisan cause in the United States. Both Joe Biden and Pete Buttigieg issued strong statements of congratulations and support after Tsai’s election. In Washington, there is widespread recognition that Tsai’s win was not a disruptive act; it was a vote for stability and the status quo. Isolating Taiwan is bad not just for Taiwan, but for the world. After Tsai’s first election in 2016, China blocked Taiwan’s attendance as an observer at World Health Assembly meetings even though it had participated for the past eight years under a KMT government. Global pandemics know no boundaries, and tackling this threat ought not to be dependent on whether Beijing approves of Taiwan’s political choices.

The pressure Taiwan is experiencing is a more extreme case of the pressure many countries, companies, and people are under from Beijing, whether it is the Swedish government awarding a free-speech prize to a Swedish citizen born in Hong Kong; the mayor of Prague; a Turkish soccer player in England; or American technology companies. When I asked Tsai what lessons the world should draw from Beijing’s global assertiveness, she told me, “We cannot afford to be romantic about the relationship with China.”

The question facing democracies is whether to accommodate Beijing’s attempt to silence all criticism and to ensure engagement occurs only on its terms, or to be candid and steadfast about defending and preserving the freedoms we have. The people of Taiwan chose to be candid not despite the fact that they are under pressure, but because of it. The rest of the world is moving in that direction, too.

This article first appeared in The Atlantic

Thomas Wright is the Director - Center on the United States and Europe, Senior Fellow - Foreign Policy at Brookings Institutions