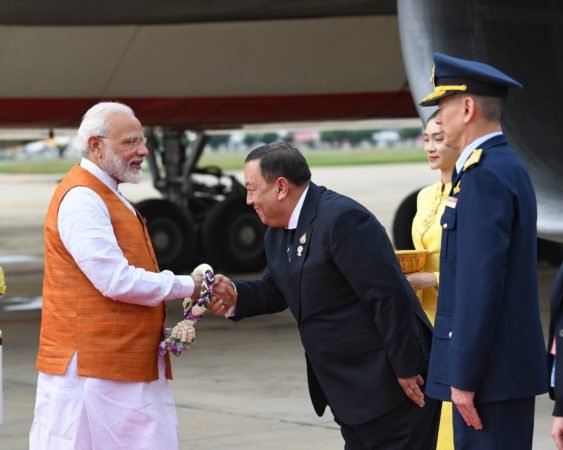 Prime Minister Narendra Modi in an interview with Bangkok Post shared his views on India’s role in the region and the world, ahead of the 35th ASEAN Summit and Related Summits, including tomorrow’s 16th ASEAN-India Summit and Monday’s 3rd RCEP Summit.

Following is the transcript of the interview.

Do you think India has become a global power under your leadership?

It is well-known that India’s is an ancient civilisation with enormous richness and diversity. Till a few hundred years ago, India contributed a major chunk of global growth. It has contributed to the development of science, literature, philosophy, art and architecture. In doing all this, it did not seek to dominate others but built lasting ties across seas and oceans. In the last few years, we have been actively increasing our contribution in the world, be it in the economic sphere or in the fight against climate change, in the field of space or the fight against terror.

Today, India is one of the largest contributors to global economic growth and development. The people of India have amply demonstrated that they are second to none, if they get the right environment policies that enable them to realise their true potential.

We are running the world’s largest campaign to improve the “Ease of Living” for the people of India and to improve their productive potential via better infrastructure, better services and better technology.

This has been made possible because we have electrified every village; brought over 350 million of our citizens into the banking system; reduced leakage of money in social schemes; built 150 million toilets in rural and urban areas; improved governance by digitising services, made rapid strides to become one of the fastest-growing markets for fintech products; and have put the Indian economy in a fast-growth trajectory. We have moved up about 80 places in the World Bank’s Ease of Doing Business index. And we have done this within a democratic framework and while preserving the best of our heritage.

There is a large aspirational middle class emerging in India, which has access to all the basic necessities and is looking to move up the ladder in life.

Our mantra is “Sabka Saath, Sabka Vikas, Sabka Vishwas”, which means development for all and with the cooperation and trust of everyone. And by everyone, we mean not only our own citizens, but the whole of mankind.

Hence, we are actively working to promote development partnerships with all our friendly neighbours. And we are seeking to build international partnerships to combat global and trans-boundary challenges. These include the International Solar Alliance and an initiative to build a Coalition for Disaster Resilient Infrastructure.

India remains a strong advocate of strengthening and reforming multilateralism amid contemporary realities. In times of global uncertainties, a rapidly growing, democratic and strong India continues to be a beacon of stability, prosperity and peace.

It is said that the 21st century will be Asia’s century. India is prepared to contribute to this transformation in Asia and the world.

What is the importance of ASEAN to India’s Act East Policy?

ASEAN is at the core of our Act East policy. It is the only cooperative mechanism by which we have had uninterrupted summit-level dialogues for 16 years so far.

This is because the ASEAN region is not just an important gateway to the Indian Ocean region, and not only because it is civilisationally very close to us. It is also because ASEAN is one of the most economically and politically dynamic regions of the world today. India wishes to see a strong, unified and prosperous ASEAN playing a central role in the emerging dynamic of the Indo-Pacific. This is in the best interests of India’s prosperity and security as well.

Engagement with ASEAN has been, and will remain, a critical element of India’s Act East policy and strategy. Our close civilisational links provide a strong foundation on which we have built a robust, modern and multifaceted strategic partnership. Strengthening ASEAN, expanding connectivity and deepening India-Asean economic integration are among key priorities of our Act East Policy.

We are very thankful to Thailand for steering India’s close relations with ASEAN under its leadership of the organisation.

What kind of role India would like to play in the regional security architecture?

India has outlined its vision for Indo-Pacific, which is shared by countries of the region as well. This recognises the primacy and the interconnected nature of the oceanic domain. Our views in this regard were articulated by me very clearly at the Shangri-La Dialogue in Singapore last year. We believe that the regional security architecture for Indo-Pacific should be open, transparent, inclusive and rules-based, anchored in respect for international law. A stable maritime security environment in the region, including freedom of navigation and over-flight and unimpeded commerce, in accordance with international law including the UN Convention on the Law of the Sea, is essential to any regional security architecture.

I enunciated the concept of SAGAR in 2015. It stands for Security And Growth for All in the Region. “Sagar” in Hindi means sea. We seek to achieve this vision by enhancing mutual trust and expanding security cooperation. India will work towards evolving common perspectives on the regional security architecture and the principles underlining it, and developing a viable institutional framework for addressing common security challenges, building on the existing frameworks and mechanisms.

We compliment Asean for its own Outlook on the Indo-Pacific, which has significant convergence with our own Indo-Pacific Vision, especially from the standpoint of principles and approach. We believe that unity and centrality of ASEAN must be a key element in developing an Indo-Pacific vision. This is not only in recognition of the geographic centrality of Asean in this region, but also because ASEAN-led regional mechanisms — especially the East Asia Summit, as the only leaders-led forum — are the most inclusive fora currently available for discussions on issues of importance to the region.

Maritime security, connectivity, economic growth and sustainable development are priority areas both in our and Asean’s approaches to build a peaceful and prosperous Indo-Pacific region. We will be glad to work with our partners in ASEAN to progress partnership in achieving these objectives.

Are you concerned about development in the Mekong subregion, where many regional powers are competing?

India has a long history of maritime, trade, cultural and civilisational links with the countries of the region. In today’s world, we have renewed these links and forged new regional partnerships. The establishment of the Mekong-Ganga Cooperation initiative 19 years ago is one such step. India recently joined the Thailand-led Ayeyawady-Chao Phraya-Mekong Economic Cooperation Strategy (ACMECS). Here, we bring all the major external partners of the Mekong countries together to build synergies and avoid duplication of cooperation efforts.

At the same time, we are also cognisant of the distinctive identities and focus of these regional frameworks. In the Indian context, for example, we are working with the Mekong countries in the frameworks of ASEAN-India Dialogue Relations, Mekong-Ganga Cooperation (MGC) and BIMSTEC. Despite seeming overlaps in themes among these frameworks, the instruments, processes and intensity in cooperation vary.

There is ample scope for the multifarious regional groupings in the Mekong sub-region to harmoniously coexist and seek synergy for progress and prosperity of the region and also its external partners.

How does BIMSTEC fit into the broader Act East Policy?

India attaches great importance to the Bay of Bengal Initiative for Multi-Sectoral Technical and Economic Cooperation (BIMSTEC). It constitutes a unique link between South Asia and Southeast Asia with five members from South Asia (Bangladesh, Bhutan, India, Nepal and Sri Lanka) and two from Southeast Asia (Myanmar and Thailand).

The 4th BIMSTEC Summit in Kathmandu gave a significant push to regional cooperation, and to the strengthening of institutional mechanisms of BIMSTEC, such as mandating the drafting of the BIMSTEC Charter and exploring the possibility for a BIMSTEC Development Fund. India actively participated in shaping the outcome of the summit. We have announced a number of initiatives to be undertaken by India to advance BIMSTEC cooperation and capacity in diverse areas such as security, disaster management, economy and trade, agriculture, health and digital connectivity, as well as activities to promote cultural and youth linkages. India firmly believes that BIMSTEC is an important part of our Act East Policy.

As readers may be aware, leaders of BIMSTEC countries attended the swearing-in of our new government in its second term at the end of May this year. This great honour for us was also a reminder of the close bonds that our countries and their leaders share.

I would especially like to mention that Thailand has made a significant contribution in strengthening cooperation within BIMSTEC.

India is perceived as reluctant to join the RCEP trade deal. Do you think RCEP negotiations can be concluded this year, and what has to be done to achieve that goal?

India today is one of the most open places in the world to do business. This is reflected in the jumps that we have made in the World Bank’s “Ease of Doing Business” index from 142 to 63 in the last four to five years. We believe in the power of global trade to integrate economies and uplift the poor.

India remains committed to a comprehensive and balanced outcome from the ongoing RCEP negotiations. Their successful conclusion is in the interest of everyone involved. Hence, India seeks balance across goods, services and investments, and also within each pillar.

We recognise the high ambitions of our partners on goods. We too would like a win-win outcome. We believe that for this, addressing our concerns over unsustainable trade deficits is important. It needs to be recognised that opening the vast Indian market must be matched by openings in some areas where our businesses can also benefit.

We have put forward reasonable proposals in a clear manner and are engaged in negotiations with sincerity. We would like to see commensurate levels of ambition on services from many of our partners, even as we are ready to address their sensitivities.

Overall, we are clear that a mutually beneficial RCEP, in which all sides gain reasonably, is in interests of India and of all partners in the negotiation.

Prime Minister Narendra Modi in an interview with Bangkok Post shared his views on India’s role in the region and the world, ahead of the 35th ASEAN Summit and Related Summits, including tomorrow’s 16th ASEAN-India Summit and Monday’s 3rd RCEP Summit.