Pakistan tries to cool row over PM’s comments on Afghanistan 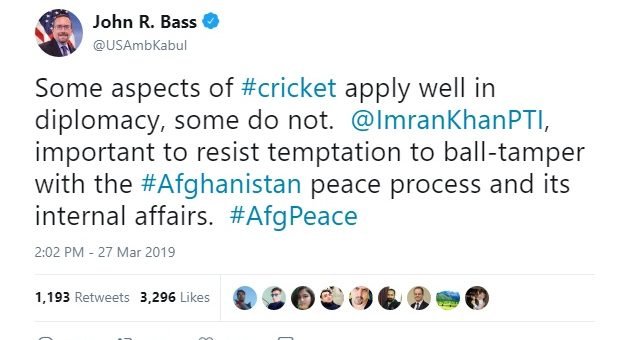 Pakistan moved on Wednesday to cool a row with Afghanistan over reported comments by Prime Minister Imran Khan that were taken to suggest that Kabul should set up an interim government to help smooth peace talks with the Taliban.

The comments, made to Pakistani journalists on Monday, prompted a furious reaction in Afghanistan and led to the government recalling its ambassador in protest at what it described as “irresponsible” remarks.

It was the third time in just over a month that Kabul has demanded an explanation from Islamabad over comments related to peace talks aimed at ending 17 years of war in Afghanistan.

The Pakistani foreign ministry issued a statement saying that Khan’s comments, reported in various forms by Pakistani media outlets and picked up in Afghanistan, had been taken out of context and misinterpreted.

“In his comments, the PM had referred to Pakistan’s model where elections are held under an interim government. The comments should not be misinterpreted to imply interference in Afghanistan’s internal affairs,” the ministry said.

“Pakistan has no other interest in Afghanistan but to promote peace through an ‘Afghan owned’ and ‘Afghan led’ political process.”

Relations between Afghanistan and Pakistan have been plagued by mistrust and at times hostility, since Pakistan’s independence in 1947. Afghanistan has never recognised their common border, drawn during British colonial rule through ethnic Pashtun lands.

For years, Afghanistan and the United States have accused Pakistan of supporting the Taliban as a way for Pakistan to limit the influence of its old rival, India, in Afghanistan.

Khan has promised to help to find a political settlement to the long-running Afghan war.

Afghan Chief Executive Abdullah Abdullah did not appear to be appeased by Pakistan’s clarifying statement.

“The remarks about Afghanistan’s future … that were expressed by Pakistan’s prime minister, Imran Khan, are not acceptable for any Afghan citizen,” he said.

U.S. and Taliban officials have held several rounds of talks but the Taliban have refused to talk to the Afghan government which they consider an illegitimate “puppet” regime.

That has raised concern in Kabul about the Taliban and United States striking a deal that leaves them out. The United States has assured the Afghan government that would not happen.

This statement by PM Khan not only irked the Afghan officials but also, the US Ambassador to Kabul John R. Bass‏, who took this matter to Twitter saying ” Some aspects of #cricket apply well in diplomacy, some do not. @ImranKhanPTI, important to resist to ball-tamper with the #Afghanistan peace process and its internal affairs. #AfgPeace”

Afghan President Ashraf Ghani, whose mandate officially expires in May, faces a re-election battle this year, but amid gathering political uncertainty the election date has been twice postponed and is now due to take place on Sept. 28.

Shut out from the peace talks, Ghani has faced pressure from political rivals to step aside and allow a caretaker government to take over, a suggestion he has rejected.