Will Saudi Arabia bail out Pakistan? 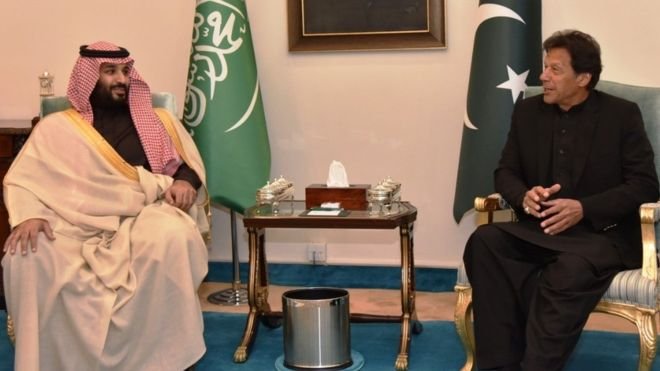 In 2018, Pakistan started facing a balance of payments crisis due to a large current account deficit. The forex reserves held by State Bank of Pakistan reached $9.88B in September 2018 and kept reducing by about $1 billion per month. In August 2018, the new finance minister Asad Umar stated that Pakistan’s financing gap is somewhere between $10 billion and $12 billion. This was the cushion needed to allow Pakistan to reform the economy enough to make it financially sustainable. However, this would only provide cover for about a year, which is not enough to implement reforms. A report in March 2019 claimed that IMF projects Pakistan will need $19 billion.

From the time he took office, PM Imran Khan started going around with the figurative begging bowl looking for a bail-out package. Pakistan appears to be addicted to external financing, as it has already been through 12 IMF programs since 1988. Imran Khan stated this time that he won’t be relying on the IMF and instead will be relying on friendly countries for covering the funding gap. Pakistan has historically received funding from four countries: Saudi Arabia, UAE, China and the United States.

From August 2018 to March 2019, Pakistan has been promised $6B in deposits from both Saudi Arabia and UAE, and a total of less than $5B from China. Not all the money has been received, and the slow inflow of money causes Pakistan to use the money only for the short term. For a major transformation of the economy, Pakistan needs a large infusion of at least $19 billion.

While the US has made its dislike of Pakistan clear by cutting off financial aid, the other three countries have not been as harsh. China has $3 trillion worth of forex reserves and providing $19 billion should not be a big hole in its kitty, as $19B is only 0.63% of it. However, China has largely refused to provide a major bail-out package and has only given small amounts in the form of debt. This could be attributed to the fact that the economy of China is not doing well and there are serious threats to the forex reserves like capital flight and the US-China trade war, as I have argued in a previous article. In fact, China put in heavy capital controls in 2015. Lastly, UAE has forex reserves to the tune of $88 billion as of September 2018. Donating $19B to Pakistan would mean giving away 22% of the forex reserves, which is virtually unthinkable in the current economic scenario.

Finally, we are left with the Kingdom of Saudi Arabia which has forex reserves of $497.2 billion as of September 2018, and the capacity to bail out Pakistan. Also, given the warm relationship between the two countries, Saudi Arabia might have the intent too. So, the fundamental question is: will Saudi Arabia bail out Pakistan if the IMF doesn’t do so?

While the nuances of Pakistan – Saudi Arabia relations are well known, a brief history can be read on Bruce Riedel’s article written in 2008.

During the Saudi Crown Prince’s visit to Pakistan in February 2019, Saudi Arabia signed an MoU for exploring $20 billion worth of investments. This MoU included a $10 billion oil refinery in Gwadar and deals in mining. My opinion is that the oil refinery deal will not work out, as there is no major growing market for petroleum products in the vicinity, except India where Saudi Arabia has plans to build an oil refinery. The mining deal has raised speculation about Saudi interest in the Reko Diq gold and copper mines in Balochistan. Also, Pakistan has probably gotten involved into the Saudi-Iran proxy war.

In 2019, there are three factors which are threatening Saudi Arabia’s benevolence toward Pakistan:

For about a decade, India’s Pakistan policy has been about isolating it from the world. Many of the results have been documented in a Twitter thread by Dhruva Jaishankar. The two most prominent ones are: the US cutting off aid to Pakistan and the possibility of Pakistan being on the FATF blacklist. After the Pulwama attack in Jammu and Kashmir, India was aggrieved and vowed to ensure complete diplomatic isolation for Pakistan. It is worth noting that the Saudi Crown Prince’s visits to Pakistan and India were happening around the same time and the possibility of a Saudi bail-out for Pakistan was speculated. It is in India’s interest to stop that from happening. While we know that India actively courted Saudi Arabia, we don’t know whether efforts were made to stop Saudi money from flowing into Pakistan.

Crude petroleum has been a very profitable commodity since the oil shock of 1973. Because automobiles sales were growing across the world, margins on oil sales were high. Because Saudi Arabia was the largest producer of crude oil, it managed to dictate its price and raked in huge amounts of money. This money led to the visibly lavish lifestyle of the Saudi royal family, and a kingdom almost totally dependent on oil revenues for survival. Even in 2016, oil accounted for 85% of exports and 90% of fiscal revenue. While this is great for the Saudi family for a short term, the oil dependence causes the infamous resource curse, where the other sectors of the economy are ignored.

After the 2008-09 recession, oil price was largely dependent on China’s economic growth, and the fall in oil prices from 2014 can be attributed to a slow-down in China. After a 30 year boom, China is unlikely to recover anytime soon, and that does not bode well for the price of oil.

The US has historically been the largest buyer of oil, but it has heavily invested in shale oil extraction, and is now close to energy independence. The US might even become a net exporter of crude oil in 2020.  This increase in supply also does not bode well for the price of oil.

Finally, the greatest long-term threat to oil is the projection that the future vehicle will be self-driven, electric and shared. These three trends are significant because of their potential to reduce the cost of travel. The ride-sharing economy, which picked up in 2009, has reduced the need for owning a car. A future is envisioned where car ownership is minimized, and  shared cars are mostly used. Additionally, self-driving technology eliminates the human driver from the car, further reducing the cost of travel. This will lead to high usage of individual cars, creating the need for low maintenance vehicles. Electric vehicles have a much smaller number of parts than a gasoline car, and hence fit the requirement. This argument was also laid out by Lyft in its IPO filings.

Saudi Arabia recognized this threat and decided to attempt to move its economy away from oil, creating a Vision 2030 plan, which envisions creating a set of non-oil industries in Saudi Arabia. It is an ambitious plan which, in my opinion, is not achievable. For a set of human capital based industries to emerge, the Kingdom needs to undergo political reform for creating a more inclusive system and reducing the Saudi family’s power. Many other reasons why the plan will not work out are published by authors at the Middle East forum here.

In fact, due to the fall in oil prices, Saudi Arabia has been running budget deficits for a while, and needed the price to average at $88/barrel in 2018 to be able to balance its budget. The average for that year was $69.52/barrel. Therefore, Saudi Arabia has been forced to use its reserves to fund the deficit, and it won’t be an overstatement to say that Saudi Arabia is actively looking for oil revenue growth over the medium term, to help with its finances until the Vision 2030 plan potentially bears fruit. This brings us to the third factor: India.

As of 2019, India is the world’s fastest growing major economy and has a rising oil demand. In fact, India is projected to overtake China as the top driver of oil demand growth by 2024. This means that India is a lucrative source of finances for the medium term, and that is evidenced by Saudi Aramco’s planned $44 billion oil refinery investment in India.

Secondly, Saudi Arabia has stakes in other sectors of India, including through Softbank’s Vision Fund investments.

In other words, Saudi Arabia needs India for its own financial health over the medium term, and possibly the long term.

In conclusion, these factors give India significant leverage on the negotiation table with Saudi Arabia, and may use this leverage to ensure that Pakistan isn’t bailed out. Whether India has used or it or plans to use it is left to be seen.

Amal Sinha is a Consulting Editor at The Kootneeti on China and Geo-economics. His areas of interest include China, Pakistan, South East Asia, and the Middle East. He can be reached at [email protected] || Twitter: @amaleshwar