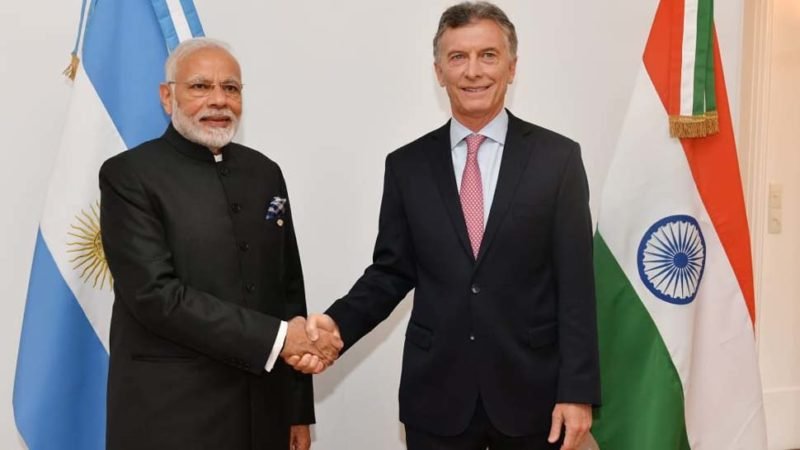 Argentina and India would be celebrating their 70th year of bilateral relation this year, and it would be marked by the three-day visit of Argentinean President Mauricio Macri on 17th February 2019. The two nations, which are equally resource-rich, have shared a stable and smooth bilateral relation over trade and commerce. The annual trade between the two countries which stands at $708.7 million for exports and imports $2.2 million are considered to go a notch higher with the President’s visit along with the business delegation which is also expected to accompany him.

The countries have been trying to figure out ways which would assist in boosting the economies, and India might even consider promoting the ethnic items as such as Alphonso Mangoes and Khadi. Officials have estimated that the business meetings between the two countries will be targeting to boost the trade relations by almost $1.5 billion. Both parties are expected to make proposals in the field of hydrocarbons, nuclear and agriculture mostly. Daniel Chuburu, the Argentinean ambassador to India mentioned earlier last week that President Macri’s visit will be highly strategic in laying out the game plan for both the nations in harnessing nuclear energy, space research and aviation, mining, pharmaceuticals and even automobiles. On part of the Argentineans, they seek a reduction on the 25% import duty which have been levied on sports items and transformative-ly work towards the trade deficit present right now.

President Macri will also be flying to Mumbai, where his business delegation will be addressing the industrialists and other big capital houses.

Another striking feature that these two countries share is in terms of its agriculture trade volume. India almost imports 90% of oil and diversification of the agricultural industry is a near possibility for the two countries. The India-MERCOSUR Preferential Trade Agreement has set the trade target of $30 billion by 2030. The President’s visit will also mark various new agreements which Argentina and India would want to work in areas specialising food and energy security. A two-day seminar ahead of the President’s visit is supposedly being conducted by the Embassy of Argentina in New Delhi, whereby matters relating to cooperative deals in technology and agriculture are expected to be discussed.

Apart from the ‘hard power’ talks, the two coutries will also be signing agreements leveraging their ‘soft power’. Tourism and connectivity become the primary agenda on the list. India, obviously has been recognised worldwide for its distinctive culture and maybe this ‘culture’ could be used to understand differences and mediate out a direct contact. No direct flights are there connecting Latin America and South-East Asia.

Precident Marci’s visit will definitely a matter of interest for India and the agreements that are to take place will be strategic and offers both parties some interest which would further strengthen the bilateral relation.