The century that passed: Commemorating the Armistice that concluded First World War 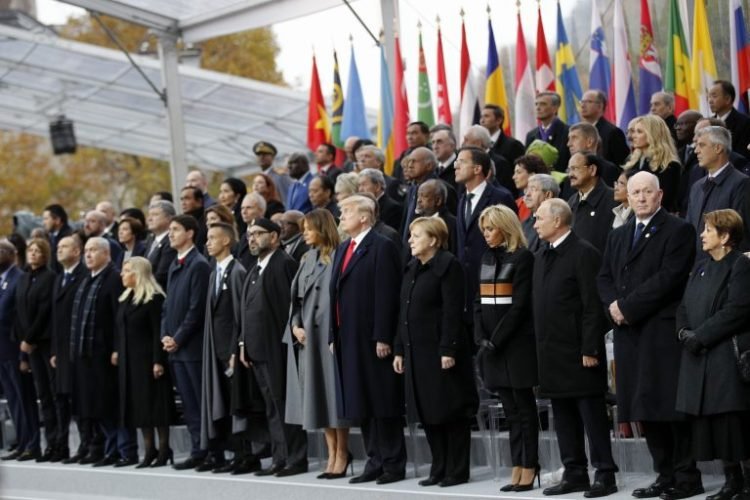 On November 11th 2018, at exactly 11 hours in the morning, the French president Emmanuel Macron opened the commemoration festivities of the armistice that concluded the first world war.

Under the pouring rain and gloomy daylight, the capital of France hosted an array of international leaders, mostly Europeans. It was a sombre and fascinating, at the same time, ceremony. If decades ago one could see a lot of religious figures, from different denominations and religions, praying for the souls of those lost during the war, president Macron wanted, this time, to create a republican atmosphere. A multicultural, emaciated, non-national display of empty french rhetoric took place. His wife, Brigitte wore dark and all wives did the same. The chastity of the republican mono-colour commemorations was punctuated only by the lively colours of the flags from countries that did participate in the Great War.

Millions have died and millions other wounded returned to devastated homes and countries. If Clemenceau wrote the destiny of future decades of Europe, by imposing to Germany a humiliating peace, the year 1918 saw the dramatical entrance of two superpowers that will dominate the century. The United States and Soviet Union (just born from a revolution) entered the world stage and will both assign themselves the most of XXI century. France was unable to recover completely from its European decadence (that continues even today), while four empires met their demise. While victorious nations signed the peace treaty in 1918, the euphoria of the moment covered the sad truth: the demented seeds of fascism (thus the roots of the second world war) were just inserted in the blood-soaked soil of the defeated nations.

As such the festivities were sombre. Not only because of the still hunting memories but because, in East Europe, a celebratory and shinier event took place. Because of the collapse of the European empires (German, Austro-Hungary, Tsarist and Ottoman) half of the continent gained freedom and liberty. Poland was one those countries, that after 143 years of foreign occupation saw its dream for a national statehood taking shape. A new, independent and territorial Poland took centre stage in Eastern Europe and will define the complex web of European relations. In Warsaw, the capital, yesterday polish nation celebrated the sacrifice of entire generations. The national pride was visible and the patriotic message clear.

In contrast, the French message was a warning. Like a prophet of doom and gloom, condemning nationalism as “treason of patriotism”, Macron just insulted all the countries born in 1918. As Macron refused to acknowledge that the sacrifices of French soldiers were done in the name of a nation, he ignored that the last century was formed, fought and won by nation states. From Marne to Verdun, the French army fought under the national flag and with the French soul. Ignoring the hero of Verdun, field marshal Petain and refusing to commemorate the national pride of victory, Macron challenged the very essence of the first world war. And Poland answered in kind, except the European bureaucrat Donald Tusk, the former Polish prime minister that is today the president of European Council. Within the condemnation of national values, Macron wanted to underscore the extreme prejudices that nationalism brought to Europe. Poland wanted to emphasise the national victory in 1918 and the proud result that today stands in front of the world. A more divided and bittersweet commemoration could not happen. While Macron speaks about a Europe dominated by unelected officials in Bruxelles and their imperial policies, covering the dramas of the illegal immigration under the drapes of a neo-Marxist transgender transformation of the Europeans, Poland is counter-offering the example of a nation-state that does not want to be drawn into the globalist nightmares.

In London, the British Queen wore black as well the future two sovereigns, Camilla and  Kate. The UK did commemorate the death of its empire as well the birth of a modern national identity. In Warshaw, the poles celebrated their wish to continue as a nation-state and its history of national struggle.

In Paris Macron spoke, as he does all the time, against everyone and everything. As during the past century, France is still not finding its European destiny. A century ago, France entered the Great War in order to re-appropriate two provinces (Alsacia and Lorena) lost 40 years prior by the adventurer Napoleon III-rd. In front of a better equipped and trained German army, the French soldiers did proudly wear their flag and strongly sang the national anthem. Today, nude and emasculated by the absolute discolouration of his national symbols, a smallish Parisian told European nations freed from the Tyranny of empires that they should be ashamed of their national victories in the first world war. Strange how deceiving language and decadence never stop in Paris.