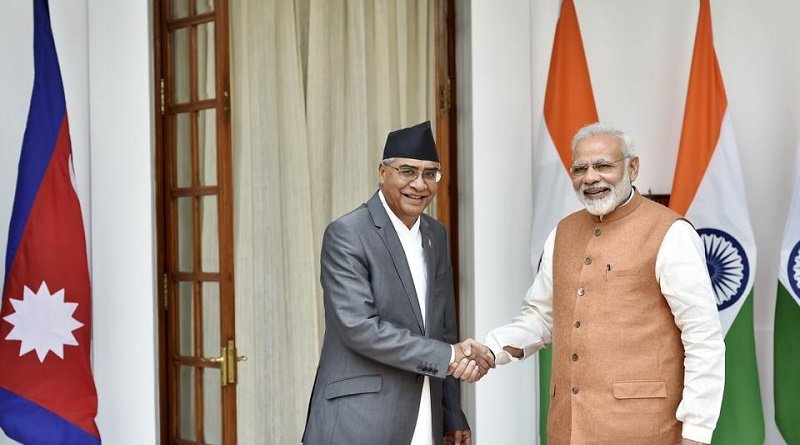 Prime Minister Narendra Modi was on his third visit to Nepal at the end of the week from May 11-12, closely on the heels of the visit of Nepalese Prime Minister K P Sharma Oli. Speaking at the India Foundation function PM Oli appreciated India’s assistance to the Himalayan Kingdom while clearly implying the business model needed to be improved. In the relationship with her neighbours, despite some unpleasant times, events and political overtures, India has continued to assist her neighbours in a non-reciprocal format. However, in the run-up to PM Modi’s visit, very important lacunae in the execution and pace of our commitments was highlighted in this vital area of developmental economic diplomacy. It was reported that Nepal’s National Reconstruction Authority asked the Nepali Government to request the Indian side to simplify procedures for grant and loan aid pledged by the Indian Government. It further said that not a single tranche of pledged amount has been received due to “procedural difficulties and delay” by the Indian side. This is the crux of the problem reported elsewhere too.

Since 1964, when India launched the Indian Technical and Economic Cooperation Programme to provide capacity building assistance to 161 developing countries from Africa, Latin America, Asia and Eastern Europe, thousands of people from those countries have been trained across a wide spectrum of over 200 training programmes. India believed in the principle and precept of “Share and Care”. She did not claim to be a capital exporting country like China, but has assisted in viable, feasible and relevant “capacity building and exports”. In the domain of collaborative paradigm, India has thus deflected the neo-colonial approaches of various other competitors. However, over time and at the request and requirement of the beneficiary target states, and with India’s economic strength and clout increasing, it became imperative to extend concessional Lines of Credits and Grants to undertake developmental projects. Even a development partnership section was created in the Ministry of External Affairs on the lines of USAID – but of course, with a fundamental difference in style, funding and outreach methodology.

India has already extended over 200 Lines of Credit to the developing and underdeveloped countries across continents to the tune of over US$ 8 billion. Fresh commitments have been made during the successive India-Africa Forum Summits and similar other high-profile outreach efforts. In fact, the 3rd India-Africa Partnership Summit in 2015, with the participation at the highest level from all 54 countries, was a great achievement. It underscored the depth and potential of partnerships which is a priority for the Indian foreign policy establishment in garnering the impact of engagements through trade, technology, training, capacity building and development partnerships. PM Modi even announced a fabulous package of concessional credit of US$ 10 billion, grants in aid of US$ 600 million and 50,000 slots for training and higher education over the next five years.

Substantial credit lines are offered to various countries where high-level visits take place, often to add content to the outcomes, and more often to provide a reliable and attractive conduit for collaboration that eventually helps Indian project and other exports. The dictum with regard to Indian technologies is that they are Available, Adaptable and Affordable, and fit in with the stage of development a country. It has generated tremendous goodwill over time. India is looked upon by the recipient countries as a power emerged out of the fight against colonialism and a model worth emulating. Indian trained personnel become de facto ambassadors of India to spread the goodwill through their first-hand knowledge and experience – if pleasant, otherwise, it could be a double-edged weapon. For example, some African students had unpleasant experiences, and such incidents, however remote and non-recurring, have to be dealt with firmly as they have the potential to undermine the goodwill for India.

While Indian assistance, both technical and financial, is sought by a large number of development partners, and India has readily provided the requisite help, the fact remains there are still many a gap that continues to stunt the desired outcome both for donor and the recipient. It has virtually become a given that during the VVIP visits some announcement of Lines of Credit is to be announced. However, for several reasons, the announcements often do not materialise into projects with the same pace and enthusiasm. One is non-availability of budgeted funds, the second being procedural uncertainty, and the third is the inability of the recipient country to comply with the cumbersome procedure prescribed. Until recently, although it was somewhat easier to allocate the funds under a given Line of Credit, there were many leaks and only a few preferred companies hogged most of the projects through connivance across the board. The end result was a half-baked below standard project with much-delayed executions. Even the Indian missions abroad, lacking the technical expertise, were unable to either appropriately process or monitor the implementation. This adversely affected our outreach. To redress the situation eventually investigations were held and some of the erstwhile beneficiary companies were even blacklisted. Now the pendulum swung to the other side in the name of transparency. Procedures and modus operandi were further tightened. Even processing of Lines of Credit projects was hamstrung, as, under the changed circumstances, few officials would want to bite the bullet. For example, the requirement of sovereign guarantees from the recipient government in most cases is a non-starter. As such, India’s terms and conditions or interest rates and tenures are not the most attractive one as compared to China and other countries. Hence Lines of Credit remain unutilised, while there is a great demand for government grants, be it from Asia, Africa or Latin America.

It is a fact that developmental assistance is a standard tool of soft power diplomacy to acquire strategic space and friendly engagements. It is practised across the globe. But India has an additional historic leverage of goodwill that gives it an edge that should not be frittered away under any circumstances. In order to address some of the underlying issues and constraints perhaps we can consider the following:-

• Pronouncements of assistance should only be made if funds have been made available to the line Ministry. If it is more feasible, the financing aspect could be retained by the Ministry of Finance while conception, negotiation and execution of the projects under the Lines of Credit should remain with Development Partnership Administration (DPA) in the Ministry of External Affairs.
• Government may also consider a revolving and non-lapsing fund for its economic diplomacy so that flagging, approvals and budgeting funds every year could be avoided. That will make it certain for the line ministries to complete the projects in time.
• Although India is not a capital exporting country, we have to decide to what extent are we willing to fund strategic development projects as grants-in-aid since most countries prefer this route and do not want to provide sovereign guarantees that further aggravate their debt burden.
• We need to recognise that we are not alone and must devise packages that are better than our competitors.
• It will be useful to shortlist credible and reliable companies from private and public sector with their own manufacturing and turn-key project execution capacity which can be tapped by the recipient countries. Of course, due diligence from any company or professionals is a prerequisite. Any unfair practices or semblance of corruption should debar them permanently.
• While bidding for projects, it is desirable that companies with niche expertise and products in the strategic domain be given precedence. Perhaps time has come to abdicate the ‘lowest bid’ approach and adopt the highest quality deliverables.
• We must acknowledge that the Africans and the other countries know as to what kinds of projects are best for them. Imposition of any preferences may recoil. All stakeholders must be on board.
• Above all, the delivery mechanisms be pruned and fine-tuned, and the gap between commitment and execution be reduced to the minimum.
• Our Ambassadors and missions be made accountable for timely implementation through close monitoring, and their recommendations be given due credence.
India’s reliability is at stake and we cannot allow the mediocrity to take the better of us in this vital area of economic diplomacy.

This article was first published at Vivekanand Internal Foundation