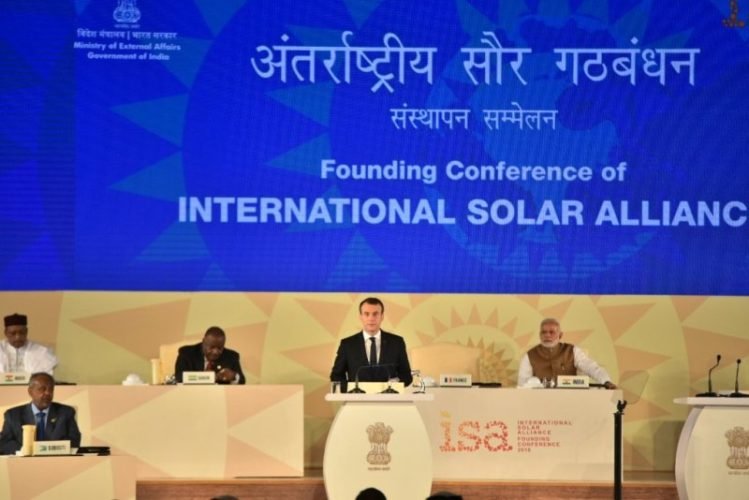 At the end of the day, it is the mother nature that might salvage the humanity from its self-destructive course and energy is the basic ingredient for any sustainable development. India through the arduous Climate Change negotiations or for that matter in GATT/WTO deliberations has always fought to protect the interests and concerns of the developing world. – Ambassador Anil Trigunayat*

On March 11 ,2018 India led the world into a new era of mutually beneficial multilateral effort so necessary for the survival of the humanity through the inauguration of the International Solar Alliance (ISA) in New Delhi by Prime Minister Narendra Modi and French President Emmanuel Macron along with over 20 other Heads of States and Governments. ISA is perhaps the first major multilateral initiative by India since the Non-Alignment Movement in the 1950s. This is an effort with a difference that it has become a North-South collaborative paradigm in the wake of adverse climate change that threatens the very existence of the human race. When the Climate Change Treaty itself was under threat with President Trump announcing the withdrawal of USA -one of the major polluters as such, USA did become a part of the International Solar alliance and lauded the efforts of the Indian leader.

Here is how we launched the #ISA. pic.twitter.com/37s5CtVVrv

Although India had launched its Solar Mission in 2010 it was only on  November 30 , 2015 that India and France embarked on the ISA  initiative with the Paris Declaration that inter- alia resolved “ Recognising that sustainable development and universal energy access and energy security are critical to the shared prosperity of our planet , we do hereby declare our intention to support India’s proposal to launch an International Solar Alliance as a common platform for cooperation among solar resource-rich countries lying fully or partially between the Tropics of Cancer and Capricorn”. ISA has the distinction of having 121 sun-rich members of whom more than sixty-one have already signed and 32 have even ratified it. Australia, Bangladesh, Cuba, France, Ghana, India, Papua New Guinea, Sudan, Sri Lanka, Togo, the United Arab Emirates and Venezuela are among those that have ratified the agreement. The ISA was accorded a status of a multilateral Treaty by the UN  which came into force on December 6, last year. It does recognize the challenge for which all member countries have to act in a coordinated manner so that the financing requirements, as well as that of technology transfer and capacity building flow, unencumbered so that affordable solar energy could reach for all. With the establishment of its headquarters in Gurgaon, India the projects and focused approach will hopefully move with the requisite speed to achieve desired objectives.

In order to bring the clean and affordable energy for all the ISA will need an estimated US$ 1000 bn until 2030 to reduce the cost of finance and relevant technologies – a huge task indeed but the vision is exemplary. President Macron announced a provision of an additional Euro 700 mn for financing the objectives of the Alliance. India has also allocated nearly US$ 2bn for funding the solar projects from its Africa Fund for development for which already several projects have been cleared or are in the pipeline. Providing a way out with his 10 point plan PM Modi recalled  India’s age-old conviction at the founding conference of International Solar Alliance stating  “Vedas consider the sun as the soul of the world, it has been considered as a life nurturer. Today, for combating climate change, we need to look at this ancient idea to find a way,”. The way forward to harness the renewable energy included making solar technology affordable to all nations, raising the share of electricity generated from photovoltaic cells in the energy mix, framing regulations and standards, consultancy support for bankable solar projects and creating a network of centers for excellence, he underlined. As a demonstration of India’s commitment to ISA, Modi said 500 training slots will be created for member countries and a solar technology mission will be started to lead R&D in the sector. At the end of the day, it is the mother nature that might salvage the humanity from its self-destructive course and energy is the basic ingredient for any sustainable development. India through the arduous Climate Change negotiations or for that matter in GATT/WTO deliberations has always fought to protect the interests and concerns of the developing world.

Prime Minister Modi in his inaugural address announced India’s commitment to extend nearly US$ 1.4 billion worth of lines of credit which will cover 27 projects in 15 countries. This initiative has been widely welcomed by the International Solar Alliance Founding States and the beneficiary countries. This is indeed one of the largest commitment to financing solar energy projects around the world. The projects in these 15 countries will include setting up of solar PV power plants, mini-grid and off-grid usage, irrigation, rural electrification, street lighting, solar power for urban infrastructure including for health, hospitals, colleges, schools, government establishments, low-income families etc. Governor General of Australia lauded ISA as India’s gift to the world.

10 action points for ways to harness solar energy and strengthen the #ISA for a better tomorrow. pic.twitter.com/R8nhjQsn2w

India has been diversifying its own energy sources from fossil fuels. It is increasing the share of renewable energy significantly and plans to produce 175 GW of which 100 GW will be from the solar energy by 2022. Already during 2017, India had crossed 20 GW of solar energy which is the highest growth of almost 140% in the world in this sector. Renewable energy capacity in India increased from 39 GW to 63 GW during the last two years.In order to effectively use energy saving devices and to supplement solar energy generation, India has distributed 28 crores LED bulbs in the last three years which have helped save USD 2 billion and 4 GW of electricity according to PM Modi.  An Indian Union territory DIU became the first state to be fully solar powered by over 100% solar power generation. However, there are certain limitations and constraints that need to be overcome by a dynamic policy framework which should address the legitimate interests of manufacturers, producers, and consumers.

As a result of competition, higher production and low input cost the solar energy price has dipped to a fairly low level in comparison to traditional sources. The manufacturers and producers have concerned due to recent imposition of 5% tax apart from enhanced duties on imported photovoltaic cells and panels. In addition cost competitiveness & high T&D losses, focus of manufactures of PV cells on export markets rather than local , availability of land, complex subsidy structure, storage batteries , multiple government agencies, financing ,technology, low expenditure on R&D etc. pose significant constraints on achieving solar power generation on the real and desired scale. A case in point is an invention of a SOLAR TREE by one of the labs of Council of Scientific and Industrial Research which is far more efficient and less space consuming due to its vertical design like a tree but the technology has still not been commercialized for some reason. Such gaps and issues need to be dealt with on a priority in a concerted and integrated manner. It would be useful to ensure strategic collaborations with Lithium rich nations like Chile, Bolivia, Argentina and Australia etc. for storage battery requirements in the future. In addition, at this stage, it will be relevant to take into account possibly financing risks and fund availability especially the Solar NPAs in due course which also may have socio-political repercussions.

Read: The Growth Triad – India-Japan-Africa | The Asian Contest for Africa

India is also faced with external constraints and disputes from solar panel producing countries. In 2013, USA complained to the WTO that India’s solar programme created an unfair advantage and barriers against the import of US made solar panels through domestic content requirement in violation of its treaty obligations under global trading rules. WTO had given the US a favorable ruling. It is another matter that under President Trump, the US has adopted one of the most stringent and protectionist trading regimes. However, since we do and will have to depend on the FDI and latest technologies to achieve economy of scale our “Make in India” and consequently our solar programme will have to align with the reality of international trade and investment to stay attractive and competitive. Well, as President Macron told PM Modi “Mr. Prime Minister you made a dream and we did it” and truly iconic India trained Solar Mamas rendered our resolve in their soulful “We Shall Overcome” that will radiate the International Solar Alliance under the Indian leadership and commitment. India is committed to play its part and lead it from the front.

Walking the talk on green future for the world and towards fulfilling the target of 100 Gigawatt of electricity in India from solar energy by 2022 ! PM @narendramodi and President of France, @EmmanuelMacron jointly inaugurated the 100 MW Solar Power Plant at Mirzapur. pic.twitter.com/STfhmF9ewQ

*Anil Trigunayat is the former Ambassador of India to Jordan, Libya and Malta and Distinguished Fellow Vivekananda International Foundation