Drowning island nations: ‘This is how a Pacific atoll dies’ 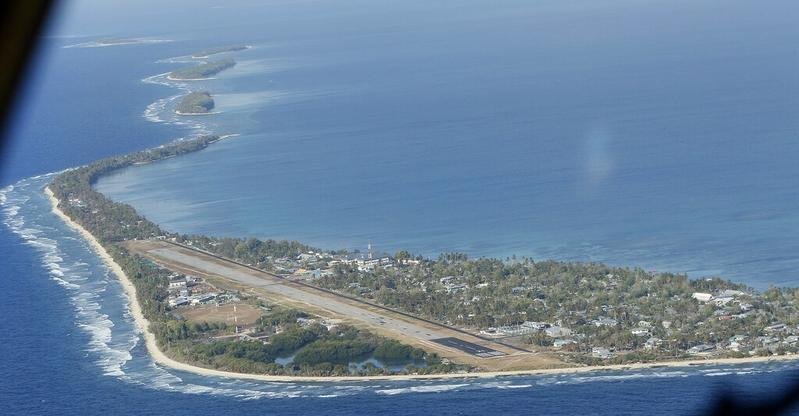 While world leaders from wealthy countries acknowledge the “existential threat” of climate change, Tuvalu Prime Minister Kausea Natano is racing to save his tiny island nation from drowning by raising it 13 to 16 feet (4 to 5 meters) above sea level through land reclamation.

While experts issue warnings about the eventual uninhabitability of the Marshall Islands, President David Kabua must reconcile the inequity of a seawall built to protect one house that is now flooding another one next door.

That is the reality of climate change: Some people get to talk about it from afar, while others must live it every day.

Natano and Kabua tried to show that reality on Wednesday on the sidelines of the U.N. General Assembly. Together they launched the Rising Nations Initiative, a global partnership aimed to preserve the sovereignty, heritage and rights of Pacific atoll island nations whose very existence have been threatened by climate change.

Natano described how rising sea levels have impacted everything from the soil that his people rely on to plant crops, to the homes, roads and power lines that get washed away. The cost of eking out a living, he said, eventually becomes too much to bear, causing families to leave and the nation itself to disappear.

“This is how a Pacific atoll dies,” Natano said. “This is how our islands will cease to exist.”

The Rising Nations Initiative seeks a political declaration by the international community to preserve the sovereignty and rights of Pacific atoll island countries; the creation of a comprehensive program to build and finance adaptation and resilience projects to help local communities sustain livelihoods; a living repository of the culture and unique heritage of each Pacific atoll island country; and support to acquire UNESCO World Heritage designation.

The initiative has already gained the support of countries like the United States, Germany, South Korea and Canada, all of which have acknowledged the unique burden that island nations like Tuvalu and the Marshall Islands must shoulder.

A U.N. Intergovernmental Panel on Climate Change report released in February spelt out the vulnerability of small island developing states and other global hotspots like Africa and South Asia, whose populations are 15 times more likely to die from extreme weather compared to less vulnerable parts of the world.

Suppose warming exceeds a few more tenths of a degree. In that case, it could lead to some areas — including some small islands — becoming uninhabitable, said report co-author Adelle Thomas of Climate Analytics and the University of the Bahamas. On Wednesday, Natano noted that Tuvalu and its Pacific neighbours “have done nothing to cause climate change,” with their carbon emission contribution amounting to less than .03% of the world’s total.

“This is the first time in history that the collective action of many nations will have made several sovereign countries uninhabitable,” he said.

Representatives from other nations who attended Wednesday’s event did not deflect responsibility. But whether they will do enough to turn things around remains to be seen.