The India-Bangladesh partnership has a long way to go 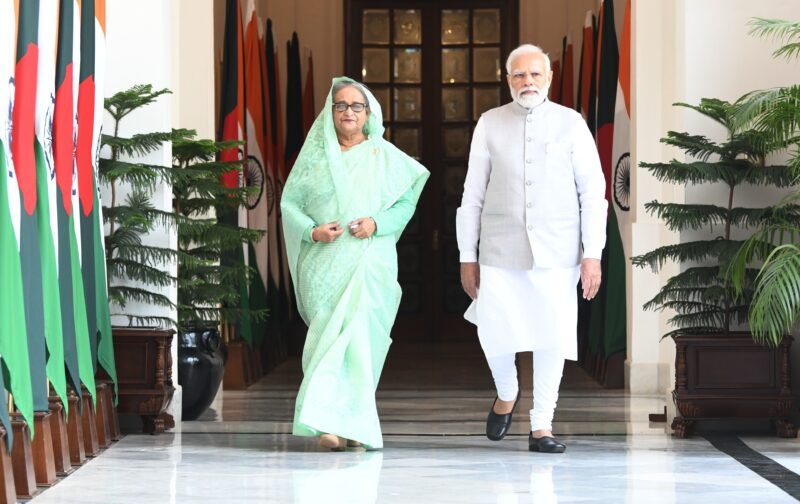 The visit of Bangladesh’s Prime Minister Sheikh Hasina to India puts new life into the relationship between the two countries. The sought-after visit to New Delhi comes against a volatile geopolitical situation exacerbated by the COVID-19 and Russia Ukraine crisis. The visit was scheduled to be held two years earlier but was postponed due to the COVID-19 pandemic and after that because of domestic factors in respective countries.

Significance of Bangladesh for India

India shares a 4096km long international border with Bangladesh, which encompasses volatile areas of northeast India like Assam and West Bengal. In the 50 years of diplomatic relations between the two countries, both nations share a common culture, ethnicity, trade, and connectivity. Bangladesh is key to India’s ‘Neighbourhood First’ which could be understood by the fact that both the top leaders of India, i.e., the president and the prime minister, visited Dhaka during the centenary of Sheikh Mujhibur Rehman. During his visit to Dhaka in 2015, Prime Minister Modi described the bilateral relationship between the two as “Shonali Addhaye” (Golden Chapter).

In the last 50 years of diplomatic relations, both nations have seen several highs and lows, which reflect the maturity of their cooperative framework. The relationship received a further boost with the coming of Sheikh Hasina to power in Bangladesh. She moved away from the anti-India policies pursued by her predecessors, especially the Khalida Zia of the Bangladesh Nationalist Party (BNP). Prime Minister Hasina played a pivotal role in putting down conservative and anti-India forces in the country. She pursued a policy that was favourable to India’s security interests. Bangladesh Army under her undertook large-scale military operations against the forces inimical to India’s sovereignty interests like the ULFA, a designated terrorist organization in India. Under her august relationship, Bangladesh moved to a secular and democratic Islamic nation away from the earlier hardline conservative country.

This makes Bangladesh a favourable and natural partner for India to achieve its global ambition. Bangladesh’s Geography at the Mouth of the Bay of Bengal and its closeness to North-East India makes it an ideal partner for trade and connectivity in the Indian Subcontinent. This is much bolstered by the presence of a benign leadership in Dhaka, which is equally worked in tandem with the Indian Government.

Economic dimensions of the ties

Economically both India and Bangladesh are significantly intertwined with each other. Bangladesh is the largest trading partner of India in the whole Subcontinent. The total bilateral trade between the two countries reached $18 billion in 2021. But there are concerns within the trade circles in Bangladesh about the one-sided trade relationship. There is a significant trade deficit that favours India.

Both countries will shortly start negotiations for the Comprehensive Economic Partnership Agreement (CEPA) to address the trade imbalance issue. This preferential agreement is vital for Bangladesh as it will graduate from a less developed nation (LDC) to a developing country by 2026. This transition will prevent Bangladesh’s export from getting preferential Indian market access.

Electricity is key to the spur economy and human development in a country. Bangladesh is facing large-scale load shedding due to power generation and transmission distribution. The huge pent-up demand after the opening of the economy after covid-19 has put stress on the electricity infrastructure in the country. Bangladesh has called for India’s help to resolve the crisis. India has replied favourably by deciding to set up a 1320MW thermal power plant in Rampal by the NTPC. A dedicated electricity transmission line operationalized by the Adani group in Godda, Jharkhand. In the Refinery sector, a ‘Friendship’ pipeline will transfer petroleum products from Numaligarh Pipeline in Assam to relieve the stress in the upstream and the downstream sector.

India has also extended a Line of Credit for the Bangladeshi security forces to augment its firepower. The $8 billion credit is significant as Bangladesh is attending to modernize its defense forces to meet future challenges in the region. The initiative also gains significance, considering Bangladeshi security depends on Chinese defense imports for operational needs. This will aid Dhaka in diversifying its supply lines.

In its quest for world domination, China consolidates its presence in its immediate and extended neighbourhood. It wants to diminish India’s traditional influence in the region to insulate its rise from any other regional partner. In recent times china’s interference in the domestic situation of countries like Nepal and Sri Lanka has increased considerably. Through its deep pockets, she is using economic statecraft as a tool to screw other nations’ power to manoeuvre.

Through its Belt and Road Initiative (BRI), China has invested considerably in the Infrastructure sector in Bangladesh. It’s put enormous money into Roads, railways, airports, electricity, and railway lines. All funding under the BRI comes with strings attached, which are opaque and devoid of economic considerations. The projects approved under the initiative are guilty of flouting environmental and labour norms. Even the interest rate and refinancing of the Debt have put the countries on the verge of being under debt stress. Indian strategist has called it a kind of ‘DEBT TRAP DIPLOMACY.”

Bangladesh owes Dhaka owes 6 percent of its total foreign Debt to Beijing, which is around $4 billion. Recently Bangladesh’s Finance Minister has warned other countries engaging in Debt related issues with China. He said, “Whatever the situation [that] is going on worldwide, everybody will be thinking twice about agreeing to this project,” He also extolled the Chinese by pointing out that “After Sri Lanka, we felt that Chinese authorities are not taking care of this particular aspect, which is very, very important.” His statements come against the backdrop of Bangladesh moving to the International Monetary Fund for emergency fund requisition.

India has a special role to play

India is the largest country in the Subcontinent, so it must carefully play its cards. It cannot match Chinese actions with its limited resources and capabilities. It needs to maintain its influence in the region through the goodwill of its activities which it has demonstrated perfectly in the Sri Lankan economic crisis by providing much-needed humanitarian aid. It should focus on its ongoing projects and try to reach its logical end rather than announcing a new one.

India also needs to be mindful of its Domestic actions. Any unfavourable incident on this will have broad ramifications for its age-old relationship. It should not let any communal incidents souring partnership with one of the trusted partners in the Indian Subcontinent.