What does Hong Kong’s new leader mean for the state? 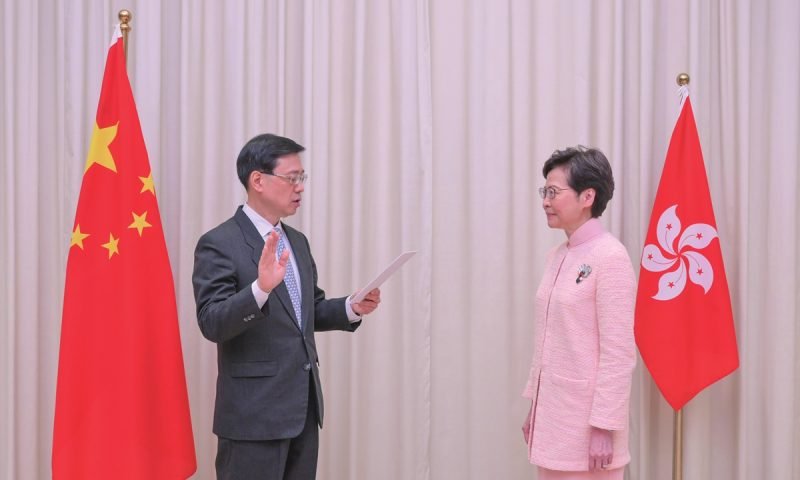 On May 09, 2022, John Lee Ka-Chiu, a hardliner former Security Chief has been chosen as the new Chief Secretary of Hong Kong. John Lee has won the approval of about 1400 pro-Beijing members which could be elucidated as 99 percent and was the only candidate selected on the secret ballot. He will replace the current ruling political leader Carrie Lam on 1st July 2022 which is also the 25th anniversary of the day when Hong Kong was handed over its sovereignty by Britain. It is believed that post-elections, Beijing’s grip will be tightened further on China’s Special Administrative Region Hong Kong because of the influence of Beijing over John.

John Lee is a 64-year-old and has a background in law enforcement. He joined the Hong Kong police department in 1977 when he was twenty years old and remained there until 2012 when he was named Under Secretary for Security and later elevated to Secretary for Security. Lee is a highly controversial figure in Hong Kong who oversaw Beijing’s crackdown in the region and was a key figure to approve Beijing’s national security law in Hong Kong in 2020. These endeavors have earned him a reputation as a hardliner and unpopular among the general public which makes the future of Hong Kong bleak and uncertain.

Post-election Lee released a 44 pager manifesto to bring about “result-oriented governance” to the region and has promised to reinforce the economy with a holistic reboot and forge unity among the masses. Lee has compared Hong Kong to a symphony orchestra, and despite his lack of expertise in overseeing a major financial center, he will serve as its “conductor“. The Chief executive is hopeful that the current ruling political would legislate in accordance with article 23 of the Basic Law which stipulates that the Hong Kong government shall enact its laws to prohibit acts of treason, secession, sedition, or subversion against the central government. John Lee’s manifesto also inculcates various sectors such as culture, economy, housing, education, infrastructure, health, tourism, etc. which succumbed post covid-19 pandemic.

The quid pro quo between John Lee and Beijing will strengthen Hong Kong’s security apparatus and policy collaboration and the hard-line clutches of the Chinese mainland on the SAR. Lee’s zero-tolerance record towards any peaceful dissent makes him a preferred candidate of mainland China for Chief Executive.

Globally, the G7 foreign ministers also raised concerns about the selection of the Chief executive in Hong Kong and labeled it as an assault on political pluralism and fundamental freedoms. The members also urged the Chief Executive to respect protected rights and freedoms in Hong Kong, as provided for in the Basic Law, and uphold the rule of law.

China’s underlying narratives might be created in Hong Kong under John Lee, as Beijing wants to set the rules of the game in the area. Beijing now has control over Hong Kong, giving it the power to shape the province, accusing anyone who advocates for democracy of betraying their country’s cause.

Mr. Lee has been branded “Beijing’s Pikachu,” after the Pokemon (a Japanese animated series) mascot. It’s a play on his Chinese name Ka-Chiu, but it also alludes to what some call his pet-like loyalty to Beijing. Political experts feel his nomination demonstrates a “shift in priority” from Beijing, and it must be considered in light of China’s present ties with Hong Kong.

Lee’s appointment is further evidence of how Hong Kong will be turned into a surveillance state with excessive emphasis on policing upon stifling voices of dissent. Electing Mr. Lee indicates that the Chinese Communist Party is concerned about Hong Kong’s security. It also shows that the central government remains skeptical of the Hong Kong administration and people. The voices of democracy will eventually be crushed by criminalizing the free and thoughtful expression in the region.

Lee was a key advocate for the 2019 Extradition Bill, which permitted fugitives to be extradited to China, Taiwan, and Macau. The measure provoked months of protests in Hong Kong, with police under Lee being chastised for deploying water cannons, tear gas, and bullets. He also justified the police intervention, alleging that the demonstrators had turned to “terrorism” and “extremism.”

Nonetheless, Lee supported China’s contentious National Security Law in 2020, which was immediately incorporated into Hong Kong’s legal framework. Secession, subversion, terrorist operations, and coordination with a foreign country or external groups to undermine national security were all named offenses under the statute. This law, too, sparked months-long, violent demonstrations.

Lee has emphasized maintaining cordial and close ties with mainland China on various economic and political fronts. Recapitulating the past events, the situation in Hong Kong is expected to deteriorate; witnessing crackdowns on dissenting voices may turn violent and could be a new normal. The legitimacy over the acts of violence might also be affirmed by the ruling political under Lee’s regime. Hong Kong is living in interesting times. As English philosopher Thomas Hobbes once correctly stated, under the state of nature (a period without governance), man’s life has become “solitary, ugly, brutish, and short.” Even if there is an authority in the forthcoming administration, the citizens will realize it.

Nichole Ballawar is a Senior Visiting Faculty member at Nagpur's Government Law College. He has also served as a Research Associate at the Centre for Air Power Studies (CAPS) as a Defence Analyst for Janes. He has also worked as a China Research Assistant for the Ministry of External Affairs and as an Intern for the United Nations Development Program. He collaborated with organizations such as NIICE, The Diplomatist, and 9dashline, among others, and produced a number of research publications. He has written several essays on China, nuclear nonproliferation, and arms control.