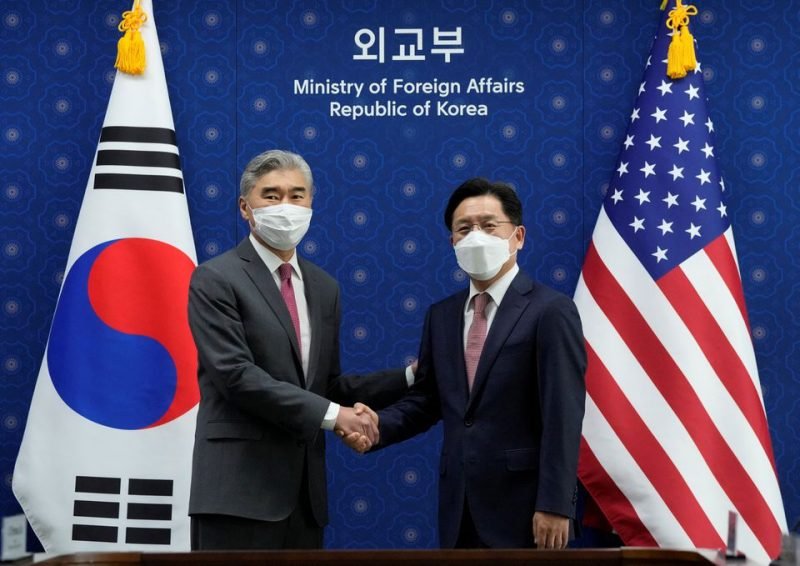 South Korean President-elect Yoon Suk-yeol had a rare meeting on Tuesday with the visiting U.S. envoy on North Korea, a source familiar with the event said on Wednesday, as both sides seek to coordinate North Korea policy under Seoul’s new government.

U.S. Special Representative Sung Kim arrived in Seoul on Monday for a five-day stay that included talks with his incumbent counterpart and officials on Yoon’s transition team.

Yoon’s spokeswoman had initially said no formal meeting was scheduled between Yoon and Kim. But they attended a “private, casual wine dinner” on Tuesday – their first encounter since Yoon won last month’s election – arranged by deputy parliament speaker Chung Jin-suk, who is an old friend of Kim’s, a source familiar with the gathering told Reuters.

Yonhap news agency first reported the meeting. Yoon’s transition team issued a statement that the dinner was privately organised by Chung and not meant a diplomatic event.

“I understand it was a friendly get-together, not intended to discuss serious policy issues such as the North’s nuclear programme,” the source said on condition of anonymity, citing diplomatic sensitivity.

Kim’s visit came after North Korea restarted tests of intercontinental ballistic missiles, breaking a self-imposed 2017 moratorium, and has shown signs that it may be preparing to resume nuclear testing.

South Korean and U.S. troops began their annual joint military exercises this week, which Pyongyang denounced as rehearsals for war.

Yoon’s foreign minister nominee, Park Jin, separately met Kim on Wednesday, during which Park had said they would explore ways to step up cooperation over the North’s missile launches and potential nuclear tests.

Kim said after talks with Seoul officials on Monday that the allies would maintain the “strongest possible joint deterrent” and respond “responsibly and decisively” to North Korea’s “provocative behaviour.”

Kim has repeatedly offered to meet without any preconditions, but Pyongyang has so far brushed off those overtures, accusing Washington of maintaining hostile policy including sanctions and military drills.