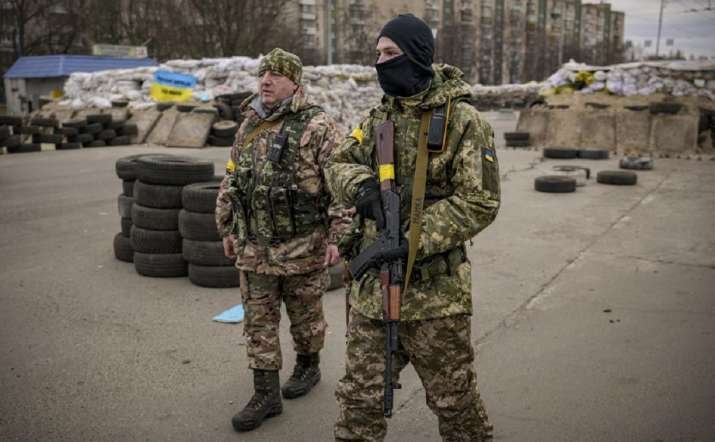 Here are the latest developments in the war in Ukraine:

But fighting appeared to be continuing around the area, with AFP journalists hearing around 20 shell explosions in quick succession by the road leading into Irpin.

Elsewhere, Ukrainian soldiers finish clearing Russian troops from the village of Mala Rogan on the outskirts of second-largest city Kharkiv.

Ahead of the new discussions, Moscow says negotiations have so far made no major breakthroughs in regular video calls.

Russia’s foreign minister also says direct talks between Zelensky and President Vladimir Putin, something the Ukrainian leader has regularly demanded, would be “counterproductive” for now.

A senior Ukrainian official says at least 5,000 people have been buried in the besieged southern city of Mariupol since the invasion began, but that bodies have gone uncollected for the past 10 days amid continuing Russian shelling.

The foreign ministry describes the humanitarian situation in the city as “catastrophic”.

Ukrainian officials decline to confirm the incident, advising people to follow “only the official information”, and warning about “various conspiracy theories.”

Abramovich and the negotiators reportedly developed symptoms including red eyes and peeling skin, though they later recovered.

Britain’s defence ministry says Russia’s Wagner Group has deployed its mercenaries to eastern Ukraine, adding that more than 1,000 fighters were expected to participate in the war after Russian setbacks.

The United Nations is seeking a humanitarian ceasefire, chief Antonio Guterres says, announcing he has tasked UN humanitarian chief Martin Griffiths to “explore… possible agreements” with both sides on trips to Moscow and Kyiv.

US President Joe Biden unveils a budget proposal with a four-percent increase in defence spending and a $6.9 billion infusion of funding for Ukraine and NATO, with another $1 billion allocated to Washington’s efforts to counter Moscow’s influence.

Biden meanwhile is again forced to defend his remarks that Putin “cannot stay in power”, saying the comments were not a policy change but expressed his “moral outrage.”

Russian attacks near Kyiv cut power to more than 80,000 homes, officials say, underscoring the peril facing the capital despite an apparent retreat in Moscow’s war aims to focus on eastern Ukraine.

“The enemy is trying to break through the corridor around Kyiv and block transport routes,” Ukraine’s deputy defence minister Ganna Malyar says.

Ukraine’s Economy Minister Yulia Svyrydenko says on Facebook that invasion has cost her country an estimated $564.9 billion, including immediate damage and expected hits to trade and economic activity.

The paper, which has fallen foul of Russian censors for its reporting on the war, says it took the decision “to save us for each other”.

Russia says it is preparing to restrict entry to the country for nationals of “unfriendly” countries, including Britain, EU members and the United States, in retaliation for Western sanctions on the country.

Meanwhile rival brewers Heineken and Carlsberg become the latest Western firms to pull out of Russia.