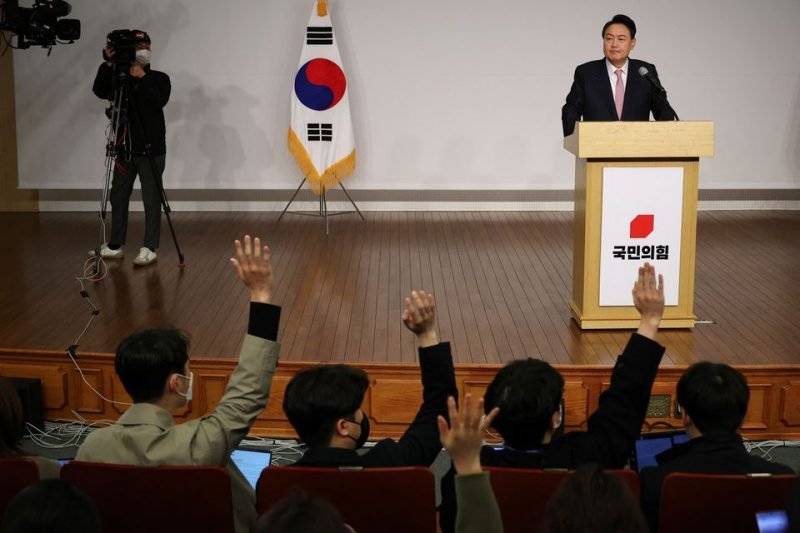 South Korea’s new president-elect harnessed widespread public discontent and disillusionment to win Wednesday’s election but the same volatile forces that brought him to power may complicate his efforts to enact reforms, analysts said.

Conservative People Power Party candidate Yoon Suk-yeol, a former prosecutor-general who had never run for office before, won in the closest election in decades after a bruising campaign marred by scandals and gaffes.

The close result, the fact the rival Democratic Party will still control the one-house National Assembly, and his vow to investigate the outgoing administration means Yoon will be hard-pressed to move beyond policy failures and political battles, analysts said.

“After a divided electorate has produced a divided government, Seoul may struggle to pursue policies of reform rather than politics of retribution,” said Leif-Eric Easley, a professor at Ewha University in Seoul.

Yoon, 61, is also expected to take a harder line on North Korea though he says he is open to talks while boosting deterrence and “resetting” ties with China.

At the centre of the voter frustration that propelled Yoon to victory are soaring housing prices and growing inequality.

South Korea’s economy is forecast to expand 3% this year, the slowest in five years, while one in four young South Koreans are effectively jobless.

A fast-aging society is a growing threat to public finances when small businesses and families are demanding more government subsidies to cope with the impact of the coronavirus pandemic.

His success hinges on his ability to find common ground across the political spectrum, as Democrats still hold nearly 60% of 295 seats in the National Assembly.

“Yoon Suk-yeol’s victory … should lead to a shift away from the bigger, and more active state that began under President Moon,” London-based research firm Capital Economics said in a report.

“But the lack of a parliamentary majority means he will struggle to pass large parts of his reform agenda.”

“It feeds into this idea that the liberals are similar to the conservatives, so it doesn’t make much difference who you vote for,” said Ramon Pacheco Pardon, a Korea expert at King’s College, London.

Yoon helped prosecute Park and in 2019 Moon appointed him prosecutor-general. He then became a household name when he clashed with the president amid investigations into senior administration figures, including a justice minister who was forced to resign.

In an unprecedented move, Moon approved suspending Yoon over allegations of abuse of power and other misconduct but a court overturned the suspension.

Yoon then resigned and was quickly wooed by the conservative opposition seeking to capitalize on the backlash against Moon’s government.

Yoon tapped into voter anger over perceived hypocrisy by Moon’s party, and also courted young men who have spearheaded a backlash against equality measures in a country with stark gender divides.

Complaints that the Democratic Party was encouraging “reverse discrimination” that compounded economic struggles, helped lead to a major drop in support among young men who had helped Moon win in 2017.

“Most people didn’t know what Yoon Suk-yeol was doing exactly, but they vaguely came to like Yoon because they think ‘he is someone hated by those we hate’.”