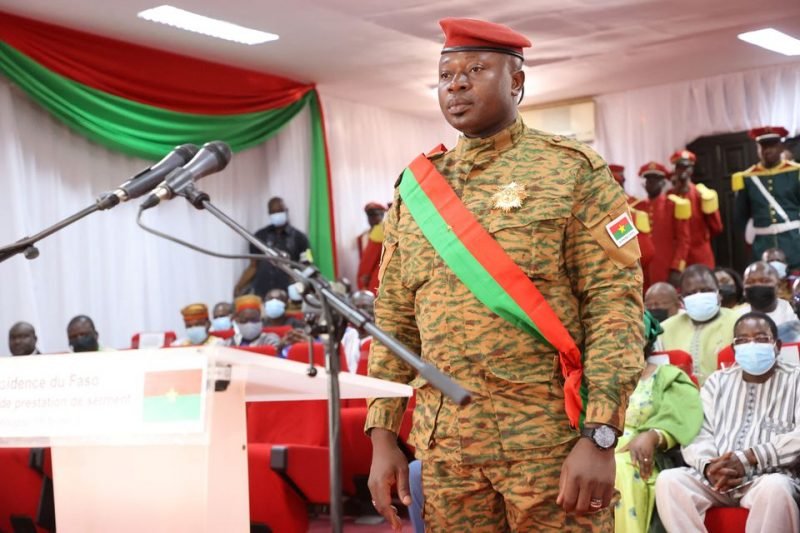 Lieutenant Colonel Paul-Henri Damiba, leader of the military junta that overthrew Burkina Faso's president in January, prepares to be sworn in as head of state during a ceremony in Ouagadougou, Burkina Faso February 16, 2022. Burkina Faso Presidency Press Service/Handout via REUTERS
PDF Button

A national conference in Burkina Faso has authorised the ruling junta to hold power for three years, potentially setting the West African country on a collision course with international partners who have urged a speedy return to constitutional order.

The junta seized power in a January coup against President Roch Kabore, blaming him for failing to contain surging violence by Islamist militants. The putsch was led by Lieutenant-Colonel Paul-Henri Damiba, who is now interim president.

The charter was approved by the conference and signed by Damiba in the early hours of Tuesday after a day-long debate in the capital Ouagadougou. It will establish a transitional government made up of 25 ministers and a 71-member parliament.

The 15-member Economic Community of West African States (ECOWAS), which has imposed strict sanctions against other regional countries in response to military coups, did not respond to a request for comment about whether it found the three-year transitional period acceptable.

An African Union spokesperson referred a request for comment to ECOWAS.

Burkina Faso’s coup was the fourth in West Africa in 18 months, following two in Mali and one in Guinea. That has raised concerns of a backslide in democracy in a region that had been shedding its reputation as the continent’s”coup belt”.

A commission that drafted the charter had proposed a two-and-a-half year transition, saying the junta needed around two years to stabilise the country and organise elections. The national conference extended it to three years.

Burkina Faso, alongside neighbours Mali and Niger, is struggling to contain attacks by armed militants linked to al Qaeda and Islamic State who have killed thousands of people and displaced hundreds of thousands over the past decade, rendering swathes of territories ungovernable and weakening governments.

Eddie Komboigo, an opponent of Kabore and close ally of former president Blaise Compaore, who was ousted in a 2014 uprising, welcomed the charter.

“It is true that not everyone is going to be happy … but it was the consensus that we reached,” Komboigo said.He urged the junta to negotiate with international leaders to reach consensus on the length of the transition.

Burkina Faso was suspended from ECOWAS and the African Union’s decision-making bodiesafter the coup. Both declined to impose additional sanctions, and ECOWAS said in early February that the junta had shown willingness to work with it to organise elections.

The sanctions against Mali, which include closing borders with ECOWAS members and suspending non-essential financial transactions, have forced Mali to default on more than $100 million in interest and capital payments on its debt.