Explainer: What’s the difference between 1.5°C and 2°C of global warming? 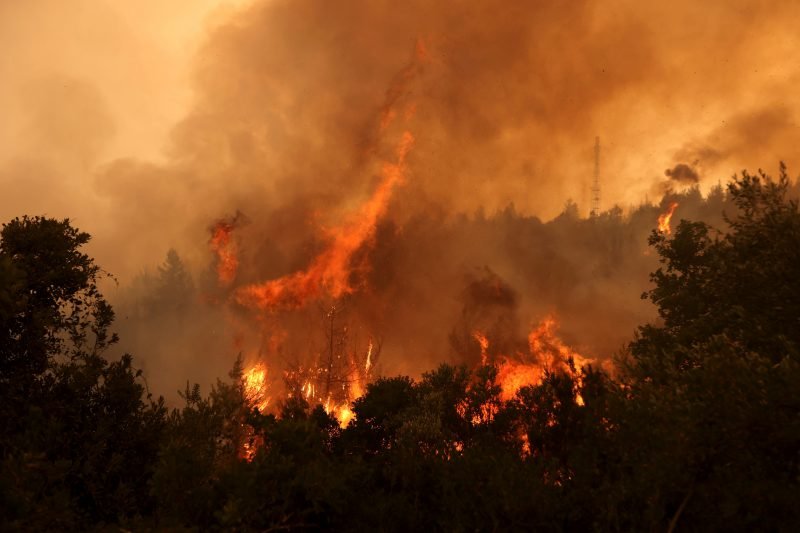 FILE PHOTO: Flames rise as a wildfire burns in the village of Galatsona, on the island of Evia, Greece, August 9, 2021. REUTERS/Nicolas Economou/File Photo
PDF Button

Over and over at the U.N. climate summit in Glasgow, world leaders have stressed the need to limit global warming to 1.5 degrees Celsius.

The 2015 Paris Agreement commits countries to limit the global average temperature rise to well below 2°C above pre-industrial levels, and to aim for 1.5°C.

Preventing it requires almost halving global CO2 emissions by 2030 from 2010 levels and cutting them to net-zero by 2050 — an ambitious task that scientists, financiers, negotiators and activists at COP26 are debating how to achieve and pay for.

But what is the difference between 1.5°C and 2°C of warming? We asked several scientists to explain:

Where are we now?

Already, the world has heated to around 1.1°C above pre-industrial levels. Each of the last four decades was hotter than any decade since 1850.

“We never had such a global warming in only a few decades”, said climate scientist Daniela Jacob at the Climate Service Center Germany. “Half a degree means much more extreme weather, and it can be more often, more intense, or extended in duration.”

“Climate change is already affecting every inhabited region across the globe,” said climate scientist Rachel Warren at the University of East Anglia.

More warming to 1.5°C and beyond will worsen such impacts.

For example, heatwaves would become both more frequent and more severe.

An extreme heat event that occurred once per decade in a climate without human influence, would happen 4.1 times a decade at 1.5°C of warming, and 5.6 times at 2°C, according to the U.N. climate science panel (IPCC).

Let warming spiral to 4°C, and such an event could occur 9.4 times per decade.

The difference between 1.5°C and 2°C is critical for Earth’s oceans and frozen regions.

“At 1.5°C, there’s a good chance we can prevent most of the Greenland and west Antarctic ice sheet from collapsing,” said climate scientist Michael Mann at Pennsylvania State University.

That would help limit sea level rise to a few feet by the end of the century – still a big change that would erode coastlines and inundate some small island states and coastal cities.

But blow past 2°C and the ice sheets could collapse, Mann said, with sea levels rising up to 10 metres (30 feet)- though how quickly that could happen is uncertain.

Warming of 1.5°C would destroy at least 70% of coral reefs, but at 2°C more than 99% would be lost. That would destroy fish habitats and communities that rely on reefs for their food and livelihoods.

Warming of 2°C, versus 1.5°C, would also increase the impact on food production.

“If you have crop failures in a couple of the breadbaskets of the world at the same time, then you could see extreme food price spikes and hunger and famine across wide swathes of the world,” said climate scientist Simon Lewis at University College London.

A warmer world could see the mosquitoes that carry diseases such as malaria and dengue fever expand across a wider range. But 2°C would also see a bigger share of insects and animals lose most of their habitat range, compared with 1.5°C, and increase the risk of forest fires – another risk to wildlife.

As the world heats up, the risk increases that the planet will reach “tipping points”, where Earth’s systems cross a threshold that triggers irreversible or cascading impacts. Exactly when those points would be reached is uncertain.

Droughts, reduced rainfall, and continued destruction of the Amazon through deforestation, for example, could see the rainforest system collapse, releasing CO2 into the atmosphere rather than storing it. Or warming Arctic permafrost could cause long-frozen biomass to decompose, releasing vast amount of carbon emissions.

“That’s why it’s so risky to keep emitting from fossil fuels … because we’re increasing the likelihood that we go over one of those tipping points,” Lewis said.

So far, the climate pledges that countries have submitted to the United Nations’ registry of pledges put the world on track for 2.7°C of warming. The International Energy Agency said Thursday that new promises announced at the COP26 summit – if implemented – could hold warming to below 1.8°C, although some experts challenged that calculation. It remains to be seen whether those promises will translate into real-world action.

Warming of 2.7°C would deliver “unliveable heat” for parts of the year across areas of the tropics and subtropics. Biodiversity would be enormously depleted, food security would drop, and extreme weather would exceed most urban infrastructure’s capacity to cope, scientists said.

“If we can keep warming below 3°C we likely remain within our adaptive capacity as a civilization, but at 2.7°C warming we would experience great hardship,” said Mann.