COP26: a global methane pledge is great – but only if it doesn’t distract us from CO₂ cuts 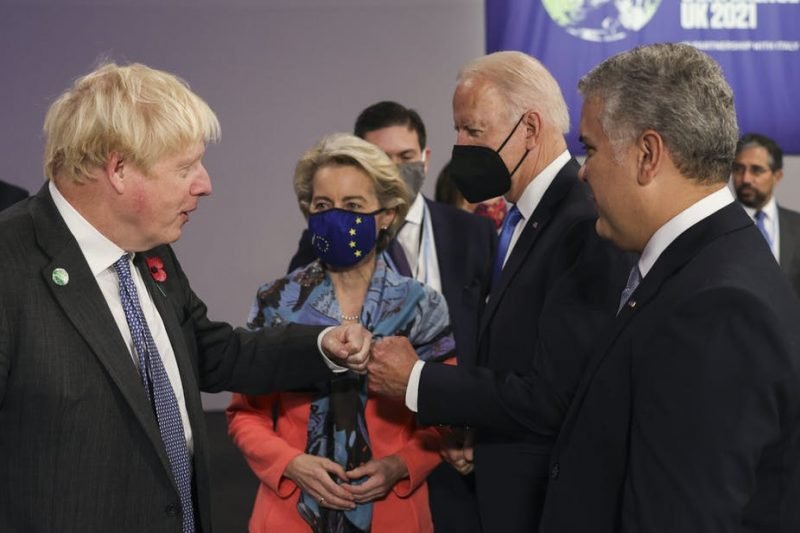 Leading an alliance of more than 100 countries, US President Joe Biden and European Commission President Ursula von der Leyen have launched the Global Methane Pledge – an agreement to cut methane emissions by 30% between 2020 and 2030.

Methane is a greenhouse gas which has caused about 0.5°C of global warming, according to the latest assessment by the Intergovernmental Panel on Climate Change. Each molecule added to the atmosphere is about 26 times more potent at warming than a CO₂ molecule, but only remains in the atmosphere for about a decade. Methane leaks from oil and gas wells, landfills and is belched out by livestock. Countries signed up to the agreement encompass two-thirds of the global economy and half of the top 30 methane emitters, including Brazil. China, India and Russia however have not signed at the time of writing.

I have been working on and talking publicly about methane emissions and their effect on the climate for about a decade. During that time, the levels of methane in the atmosphere have gone rapidly upwards, causing more global warming. So while I think it would be great to reduce methane emissions by 30% by 2030, what is that niggling at the back of my mind?

It’s the suspicion that so much noise about methane cuts will (deliberately or not) be a good news story that obscures slow progress on CO₂ emissions. You might ask: is this such a problem? Isn’t any action to be applauded? Yes, and no. Yes, because any reduction is greenhouse gas emissions is progress towards the Paris Agreement temperature goals. That is undeniable. No, if it displaces effort away from the main driver of global warming – fossil CO₂ emissions.

We may not know how much displacement is happening, but we do know that for the past 30 years, since the Rio Earth Summit, the world has failed to reduce CO₂ emissions. And so, because we have effectively left it too late to have a smooth reduction in CO₂ emissions down to zero while limiting warming to well below 2°C, we hope that perhaps methane is going to save our bacon.

How can methane reductions be so much more effective than CO₂ reductions, when methane contributes less to global warming than CO₂? It’s because methane is much shorter-lived in the atmosphere than CO₂, and therefore reducing emissions of methane actually reduces the amount of methane in the atmosphere within decades. Methane has a half-life of around a decade, so roughly speaking, if you emit 10 tonnes of methane today, 5 tonnes remain in the atmosphere after a decade. If we completely stopped emitting methane today, the methane-caused global warming would halve in about 20 years. This is in stark contrast to CO₂, which lives for so long in the climate system that even with no emissions at all, the CO₂-caused global warming will remain the same for centuries.

So this makes it quite clear that all the way along on the pathway to net-zero CO₂ emissions, our ever-diminishing annual CO₂ emissions are causing additional warming, which will remain for hundreds of years. This is why slow progress on CO₂ is so damaging. Every tonne of CO₂ we emit will stay in the climate system, warming the planet, for hundreds, potentially even thousands, of years.

Reductions in methane emissions do provide a quick win in terms of shaving off up to a few tenths of a degree of global warming. The 30% cut would reduce the global average temperature by about 0.1°C by 2050, which is the same amount as the warming as we have had since COP21 in Paris in 2015.

This decrease in temperature is proportional to the rate of methane emissions reductions though. Once the reductions stop (e.g. we stabilise global methane emissions at 30% below 2020 levels) then methane-caused warming will stabilise, and then start to slowly rise again. This is because while the atmosphere responds to changes in greenhouse gas levels relatively fast (a few years), the deep ocean responds much more slowly. The whole climate system would take hundreds of years to equilibrate to changes, and so if we “froze” the atmospheric composition, temperature would slowly rise over centuries. If we were able to decrease methane emissions after 2030, at a rate of about 3-5% per decade, this would counter the slow equilibration, and give a stable level of methane-caused global warming.

The fact that methane emissions cuts bring down temperature on a near-term basis only has led to two distinct conclusions being drawn from the same fundamental science.

Position one is that cutting methane emissions produces results faster than cutting CO₂ emissions, and therefore we should do this to put the handbrake on global warming. This argument places a priority on limiting global warming in the short term. However, if limited funds are spent on methane cuts instead of CO₂ cuts (such as by a company with a set budget for emission reduction projects) then temperatures will be lower in the short term but higher in the long term.

Position two is therefore that we should prioritise CO₂ cuts over methane cuts. The cumulative nature of CO₂ means that if we reach net zero in 2050 with rapid action starting from 2025, we will have lower sum-total CO₂ emissions and therefore lower temperatures than if we delay even longer and only start reducing emissions in 2035. All efforts should go towards CO₂ reductions, and until we are confident we are on track with CO₂, there is no time to waste on methane.

These two conclusions arise from the same science. It is the surrounding assumptions – whether we can act on two fronts at once, or if action on methane inevitably detracts from actions on CO₂, whether we should prioritise near-term warming so society can adapt to a slightly more gradual change in climate, whether by 2100 we will have cracked carbon removal and storage so we can remove all the CO₂ later?

These are discussions that go way beyond the climate science, which is why it is great that methane is having its day at COP26 – so long as the political discussions are based on a solid foundation of the science, so that the consequences of any decisions are understood.

While these contrasting viewpoints may seem confusing, there is one simple fact that nobody can disagree with. Fossil fuels are the cause of about a third of all anthropogenic methane emissions. Therefore, if we stopped fossil extraction and use by 2030, the Global Methane Pledge would be achieved at the same time as eliminating most anthropogenic CO2 emissions. It’s that simple.

Michelle Cain is a Lecturer in Environmental Data Analytics, Cranfield University and Visiting Researcher in Atmospheric Science, University of Oxford