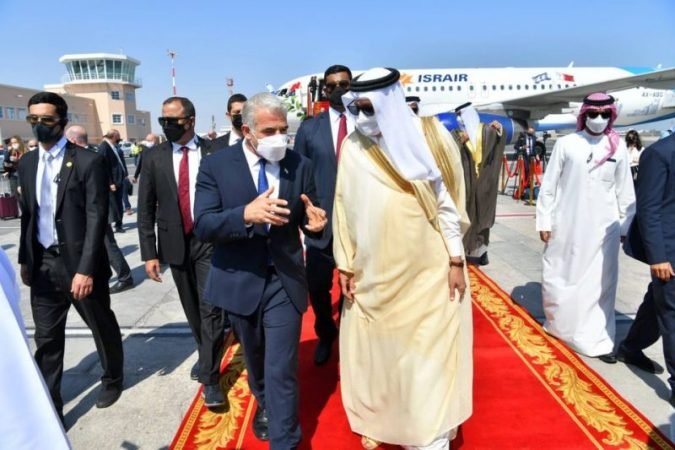 Bahrain hosted the Israeli foreign minister on Thursday for the highest-level visit since the countries established ties last year andwhich included a tour of a U.S. naval headquarters to signal common cause against Iran.

“His Majesty’s leadership and inspiration have led to true cooperation and our meeting outlined the path forward for our relationship,” Lapid said on Twitter.

“Our opportunities are shared. Our threats are also shared, and they aren’t far from here,” Lapid said in remarks to reporters, apparently alluding to Gulf power Iran.

Touring the Bahrain headquarters of the U.S. Navy’s Fifth Fleet, which has faced off Iranian vessels amid tensions over Tehran’s regional aims, Lapid said: “Our three countries work together because we have similar interests in the region.”

“When we speak about peace, we need to remember that peace must be protected from those who would harm it,” he added, according to his office.

The Fleet said on Twitter that Lapid and his hosts discussed regional maritime security cooperation.

The Sunni-ruled kingdom accuses Iran of stoking unrest in Bahrain, a charge that Tehran denies.

The island state, which quashed an uprising led mostly by Shi’ite Muslim members of its population in 2011, saw some sporadic acts of protest after the Abraham Accords were signed.

On Thursday, Bahraini activists circulated on social media images of what appeared to be small protests in Bahrain. Reuters was unable to independently verify these.

The accords have been denounced by Palestinians as abandoning a unified position under which Arab states would make peace only if Israel gave up occupied land.

In Gaza, the Islamist Hamas group criticised Bahrain for hosting Lapid, who returns to Israel on Thursday evening. Hamas spokesman Hazem Qassem said this represented “an encouragement” of what he described as Israeli “crimes against our people”.

Lapid’s office said he and his Bahraini counterpart signed deals on cooperation in medicine, healthcare, sports, and on water and environmental conservation. Lapid also inaugurated Israel’s embassy in Manama.