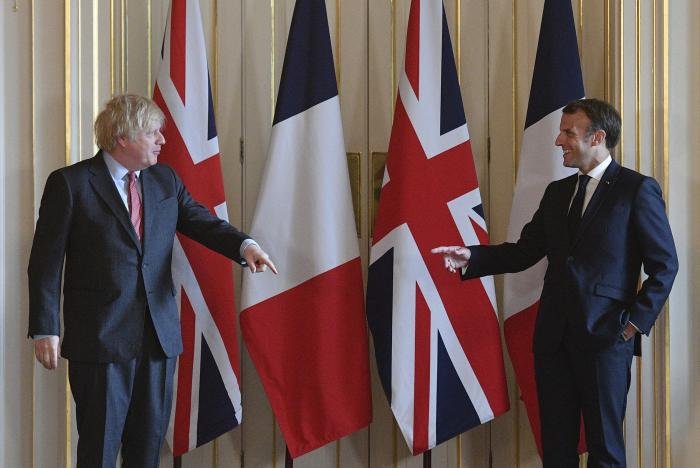 British Prime Minister Boris Johnson said this week that ties between Britain and France were “indestructible”, but the relationship is bent badly out of shape with little prospect for an immediate improvement.

After years of duelling about Britain’s departure from the European Union, the feuding neighbours have fallen out again over the sale of submarines to Australia in the past week.

French President Emmanuel Macron was left furious after Australia ditched a mega-deal to buy submarines from France in favour of American ones — secured during secret negotiations facilitated by Britain.

While Macron finally took a call from US President Joe Biden on Wednesday, a week after the row erupted, he is yet to speak to Johnson whose quip that the French needed to “prenez un grip” (get a grip) has gone down badly in Paris.

“The relationship hasn’t been this tense in a long time,” Sylvie Bermann, France’s ambassador to Britain from 2014-2017, told AFP.

French fury over what it sees as a “stab in the back” over the submarine contract saw Macron recall the French ambassadors to Washington and Canberra in an unprecedented diplomatic protest.

But in what looked like an attempted snub, the French envoy in London remained at her post, with French Europe Minister Clement Beaune dismissing London as a mere “third wheel” in the deal and a “junior partner” to the US.

Privately, French officials concede Britain played a crucial role in connecting the Australians with the new Biden administration, while British companies are set to be involved in building the Australian subs.

The dynamic of Anglo-French relations has always been subject to ups and downs, shaped by their historical rivalry as well as their time as allies in the two world wars.

For more than 40 years, they were yoked together in an often tense relationship within the European Union, but Britain’s painful departure from the bloc has seen them return to a pattern of almost permanent antagonism.

“Today we have a British prime minister who wants to prove that Brexit is a great success and on the other side a French president who is profoundly European, so it’s normal that there are disagreements,” Bermann said.

“France was the ‘bad cop’ and called for a hard line right up to the end,” she said.

As a result, 43-year-old Macron is seen in London as ideologically opposed to Brexit — and therefore determined to ensure it comes with high costs.

Former British foreign secretary Jeremy Hunt wrote recently in the Daily Telegraph that ties would improve only “if France stops treating us as a renegade state needing to be punished for Brexit and instead as an independent, equal sovereign power”.

One area that remains steady — despite the Australian submarine row — is defence cooperation, diplomats on both sides stress.

French and British aircraft carriers sailed together in the Mediterranean this summer, while soldiers from both countries operate alongside each other in eastern Europe and the Sahel region of West Africa.

But while security bonds are strong, disagreements stemming from Brexit remain constant political irritants, notably fishing rights as well as the still vexed issue of trade between mainland Britain and the province of Northern Island.

French fishermen complain about red tape that keeps them out of waters in the Channel, including around the island of Jersey, a self-governing territory that relies on Britain for defence.

Johnson dispatched navy ships when French fishermen protested near Jersey in June, while a minister in Paris suggested France could cut vital electricity exports to the island unless it cooperated.

“There’s a very bad game being played by the British,” Beaune complained on Wednesday amid reports fresh protests were looming. “We’re at the end of our patience. Fishermen are too, with justification.”

Elsewhere in the Channel, thousands of sea crossings by migrants from France to Britain are another source of tension.

French Interior Minister Gerald Darmanin suggested on September 9 that his British counterpart Priti Patel was guilty of attempted “blackmail” after a meeting in London to discuss the issue.

Patel had reportedly wanted to make British financial aid for French coastal patrols conditional on increased efforts at stopping the boats — while also threatening to push the migrants’ dinghies back towards French waters.