With Jaishankar’s Visit to Georgia, The Saint Queen Returns to her land 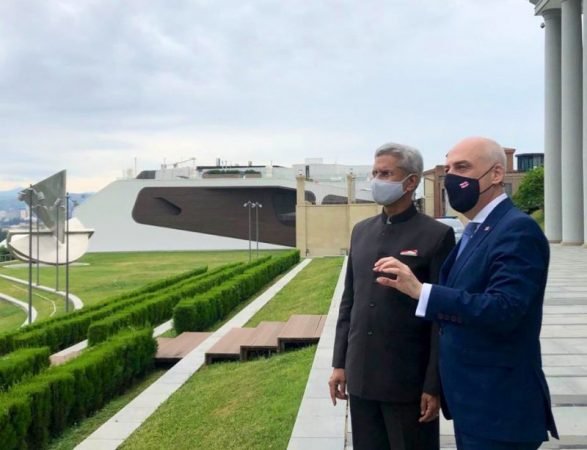 The Indian Foreign Minister, Dr S. Jaishankar made an official visit to Georgia on 9-10th of July on his way back from Moscow. The EAM travelled to the strategically located (at the intersection of Eastern Europe and Western Asia) country upon an invitation from his Georgian counterpart, Vice Prime Minister and Foreign Minister David Zalkaliani. Dr Jaishankar played a ‘Sergey’ with this visit, and reminded us of the time the Russian foreign minister; Sergey Lavrov visited Islamabad directly after visiting Delhi.

Georgia and Russia do not share a cordial relationship ever since the former’s disintegration from the Soviet Union in 1991, and the two also fought a brief war in 2008.

Jaishankar’s visit is etched in pages of history for the India – Georgia relationship for more reasons than one. To start with, this is the first visit of any Indian EAM to independent Georgia. Secondly, and possibly the most important feature of this primary visit is the returning of the relics of Martyr Saint Queen Ketevan, who is an important religious figure for the people of Georgia.

The EAM held a meeting with his Georgian counterpart to discuss bilateral relations and other areas of regional and international interest. He met many leaders from the cabinet, like the Prime Minister, Economic Minister, and the President. Dr Jaishankar also unveiled the Mahatma Gandhi statue in a famous Tbilisi Park and met the representatives of the Indian community in Georgia.

He took this visit as an opportunity to invite Georgian leaders along with a business delegation to India, in hopes to attract more Indian business investments in Georgia.

India and Georgia enjoy a cordial relationship ever since the latter gained independence in 1991 after the disintegration of the Soviet Union. Although a Georgian Foreign Minister had visited India in the year 2000, this visit marks a first for an Indian EAM. Georgia receives around 50000 Indian tourists each year and is currently hosting 8000 Indian students. There are Indian investments, and manpower engaged in the hydroelectricity, steel, power transmission, and agricultural sectors. A lot of Bollywood and Tollywood movies have also been shot in Georgia. India is engaged with Georgia on an Educational, Cultural, and Economic level. However, the two countries have much more potential for bringing about meaningful collaborations.

Queen Ketevan ruled over the Kingdom of Kakheti in Eastern Georgia and was canonized in the 17th century by Patriarch Zachary of Georgia, after her death. She was martyred while protecting her religion and resisting forceful renunciation of Christianity. Her remains were collected by two Augustinian Monks and were brought to India by the Portuguese, where they remained buried till 2005.

In 2005, it was confirmed that the relics found in the premises of the St. Augustine Church in Goa belonged to none other than the Georgian Queen Ketevan.

The relics were given to Georgia in 2017, for 6 months, to celebrate 25 glorious years of India – Georgia diplomatic relations. Finally, last week on the 9th of July, with Jaishankar’s visit to the country, the Indian government decided to permanently hand over a part of the Holy Relics from Goa to the Georgian government and Church.

At the handing over ceremony, held at the Sameba Holy Trinity Cathedral, EAM Dr Jaishankar thanked Metropolitan Shio for allowing him to witness the sacred occasion, and said that he felt “blessed” that the purpose of his first visit to Georgia was such an “auspicious one”. An elaborate celebration took place at the major Tbilisi cathedral. The decision was made by Indian Prime Minister Modi to permanently return a part of the relics, and hopefully, this gesture will inspire upcoming generations to further build upon the India- Georgia relationship. The presence of the relics in both India and Georgia will be seen as a “bridge of faith” between the two countries.

Statement at the Joint Press Conference

In his statement at the Joint Press conference with Prime Minister Irakli Garibashvili, The EAM announced that he held constructive talks with Vice Prime Minister and Foreign Minister David Zalkaliani, and various other Georgian cabinet ministers.

The EAM emphasized that although bilateral cooperation between the two countries is beyond satisfactory, there are still a lot of untouched avenues of potential. Both countries look forward to working with each other and agree that much more could be done with the joint effort of the two governments. Dr Jaishanakar highlighted the importance of connectivity in a globalized world and believes that it is in the “mutual interest” of both countries to promote air, maritime, and land connectivity. The EAM also took this opportunity to thank PM Garibashvili for assisting the panic-struck Indian students during the pandemic.

Although there are a lot of pre-existing areas of investments in Georgia, the leaders hope to see more business investments in the upcoming years. Georgia has an exceptional Rank 7 in the ‘Ease of Business Index’, and the EAM hopes that the country attracts more Indian businesses. He also encourages Georgian companies to consider India for manufacturing purposes.

The EAM’s visit concluded with the unveiling of the Mahatma Gandhi statue in a famous Tiblisi Park. He called this inauguration a “fitting conclusion to a memorable visit”.

Indeed, the visit was memorable in many senses. Not only was it the very first visit of an Indian Foreign Minister to Georgia, but it was also an extremely sentimental one, for the people of India and Georgia alike. This joyous visit has set the foundation stone of the India – Georgia relationship and will give impetus to India – Georgia cooperation.