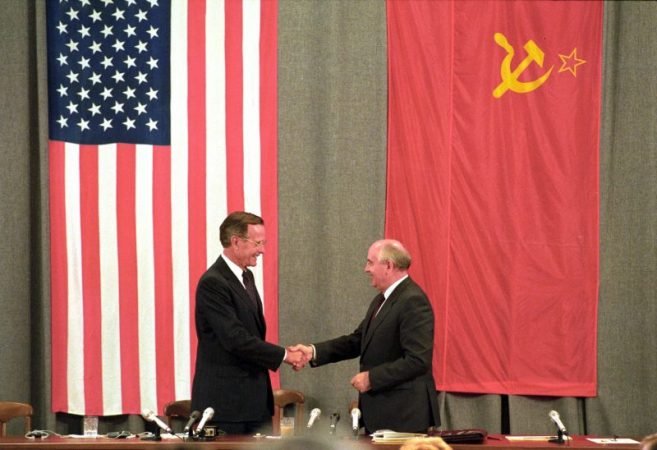 Today, all of us know the sole power in the world is the United States of America. All the world politics directly or indirectly revolves around the USA or somehow for or by the USA. The USA is like a hegemonic power, but it does not ensure its physical hold and presence anywhere but the proxies e, g Iraq. Once Baghdad was not a direct threat to the USA, the September II incident gave an expression of threat to the USA. Instead of going for a sole military strategy like previous empires in history, the USA decided to make a politico-military strategy for eradicating terrorism out of the Globe. Looking back to the periods of Bush and Obama, we can quickly analyze that they had pushed America into the direction of an unattainable objective by picturing the issues in a way that did not exist. As a result of this, America made many of the worst enemies of itself around the Globe. Later, after 9/11, they realized what they had done, and it became mandatory for them to choose a policy of global strategy and balancing, same as the Roman and British Empire used to have in history, to maintain their hegemony. They used to create regional players and let them fight in the best way possible for the interest of the prime hegemon. People did not even know that they are just the chessmen being played by someone else behind them. They used this tactic by creating such an atmosphere of distrust, secrecy, and hypocrisy between nations and neighbors that they did not even pay a heed to question the prime imperialist. Direct military attacks and taking over the lands were the last part of a game where they used to say check and mate. Ultimately, they used to be the stakeholders of whole empires.

What the USA learned from these examples and history is fascinating, and this is the actual point where the USA differs from these typical Hegemons. They followed the same footsteps of old imperialist powers regarding balancing power in different regions and always tried to hit when iron was hot. They never indulged in any direct war but always proved to be a trump card and finisher for almost every war it fought. In World War I USA, sticking to this strategy entered when European powers were failing, and in the end, the USA helped in signing the treaty that sidelined France to get control over Europe after the war. The same is the case during WWII; the USA stayed out of war first and motivated the British to deal with Germans in the east and Russia to deal with them in the west and then introduced a balance of power zones to contain Russia to have control on western Europe. This U.S. strategy of deception and maneuvering was logical, factual, and dubious throughout the Cold War. After the fall of the USSR, U.S. strategy shifted from “containing major powers” to “containing regional hegemons,” and this is where they differ from those of the Roman and British Empires. They never went for direct control over the land as this created a sense of opposition among common masses, which at the end of the day created a mess for the imperialists, resulting in the fall of empires. They tried to use massive soft power by creating a special kind of political brass in all the countries they have had interests from. This brass directly or indirectly kept on serving U.S. interests and gained benefits in the form of Aids and Arms in return. If the USA used to feel any clash of interest in some country, they attacked them but not directly. They used complete

propaganda tools to find legitimacy for those attacks. They created such environments that people feel like the USA is our only savior now; Iraq in Saddam’s Assassination is the recent example. The USA made the mistake of getting indulged in direct war with the Afghan Taliban and Al Qaeda but did not achieve goals and realized that balancing power is more sustainable. As a result, they had to come upon the table. This policy of the USA has a significant advantage over the past empires. They are showing a very multidimensional economic, social, military, and ideological approach. Though they can take control over the entire region, they are still looking for allies in different regions to safeguard their interests.

The USA has a sort of Deep power, and it is supposed to be the most balanced power. Deep power usually refers to economic, political, and military power in inappropriate and mutually supporting amounts. Deep power also depends upon cultural and ethical norms that present how the power would be used, and it also gives structure to an individual’s actions. The USA single-handedly produces 25% of the world’s wealth, which is also a more significant factor in its hegemony. They have navy fleets in almost every ocean and military bases all around the world. One of the other factors that give a significant advantage to the USA in maintaining its hegemon is the USA’s geographical location. This is the supreme advantage that differentiates the USA from all previous empires. It is isolated from the rest of the world and prevents it from many of the disastrous consequences. Unlike the previous empires, the American structure of dominance is a bit informal as it constitutes many factors like military, politics, diplomacy, use of hard and soft power, proxies, and economics at the same time. All these factors collectively make the USA an unchallenged hegemon till the date, but one can say as George Friedman says: