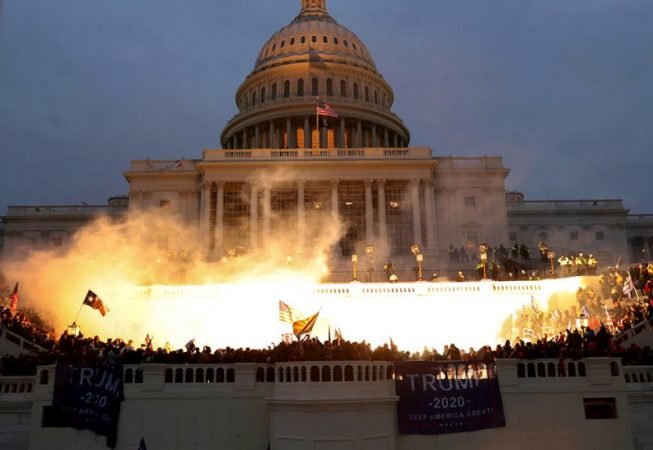 The Biden administration paved the way for that possibility, say constitutional scholars and lawyers in the cases, by arguing in an unrelated defamation case against Trump that presidents enjoy sweeping immunity for their comments while in office – and the right to a defense by government lawyers. Biden’s Justice Department used that rationale in a surprise decision this month to continue defending Trump in a case filed by E. Jean Carroll, who contends Trump raped her 25 years ago and then lied about it while in office, defaming her.

That decision reaffirms the position the department took under the Trump administration. And it has profound implications for several ongoing lawsuits, including one filed by two U.S. Capitol Police officers seeking to hold Trump liable for injuries they suffered defending the building in the Jan. 6 attack.

Attorney Philip Andonian said he fears the Justice Department, under the same legal rationale, will also defend Trump in a case Andonian is pursuing on behalf of U.S. Representative Eric Swalwell, a California Democrat. Swalwell alleges Trump incited the deadly Jan. 6 riot in an effort to stop Congress from performing its duty to certify Biden as the election winner. Andonian called the logic behind the department’s decision to defend Trump against Carroll’s defamation suit “alarming.”

The Justice Department appears to put no limits on immunity for speech by a sitting president on any matter considered “of public concern,” Andonian said.

The Justice Department declined to comment on whether it would use the same argument as a basis for intervening in the other lawsuits Trump faces. The White House did not respond to a request for comment but has previously said it had no role in the department’s decision on whether to defend Trump in the Carroll case or others.

Trump faces more than a dozen active investigations and lawsuits involving a wide range of matters, including sexual misconduct allegations, financial disputes and government probes into his business dealings and his efforts to overturn the 2020 election. But the Justice Department’s assertion of presidential immunity in the Carroll case would only be relevant to other cases involving his statements or actions while in office.

The Justice Department laid out its rationale for defending Trump in a June 7 brief in the Carroll case. After Carroll, a former magazine writer, wrote in 2019 that Trump raped her, Trump – while in office – accused her of lying and said he’d never met her. Carroll is among about two dozen women who have accused Trump of sexual misconduct. The brief argues that Trump, like any president, is covered by federal laws, including the Westfall Act, that protect federal employees from being sued for actions taken as part of their jobs.

Although Trump’s remarks were “without question unnecessary and inappropriate,” the brief said, he was acting within the scope of his office when he made them. “Elected officials can – and often must – address allegations that inspire doubt about their suitability for office,” the argument says. “Speaking to the public and the press on matters of public concern is undoubtedly part of an elected official’s job.”

One prominent constitutional scholar characterized the department’s position in the Carroll case as a blunder that will be difficult to undo.

“It would be very difficult for the Justice Department to change course now,” said Laurence Tribe, a Harvard University constitutional law professor and a frequent critic of Trump. “The Titanic is aimed at the iceberg.”

Tribe and other critics of the department’s position say it fails to draw obvious distinctions between a president’s official conduct and matters that clearly fall outside the duties of the office. When a president says or does something illegal, they say, it does not warrant a taxpayer-financed defense by government lawyers.

Tribe served as a legal adviser for the House of Representatives’ second impeachment of Trump, in which the former president was accused – but eventually acquitted – of trying to overturn legitimate election results to retain presidential power. Tribe said it would be “outrageous” for the department to defend Trump against the lawsuits related to the U.S. Capitol riots “on the basis that fomenting a violent insurrection, as charged in those suits, fell within the president’s job description.”

Trump has denied any responsibility for the violence at the Capitol. His lawyers have said he was making political arguments, protected by the First Amendment, and not inciting people to riot.

Jesse Binnall – a private lawyer defending Trump in the Capitol Police case, the Swalwell case and at least two other ongoing suits – declined to comment on whether he will seek the department’s intervention on Trump’s behalf in any of those matters. Such a request would require the Justice Department to take an official position.

Binnall has echoed the Justice Department’s immunity argument in briefs filed for some of those cases, but he so far has not directly requested that the department intervene in any of them.

If the Justice Department does end up defending Trump in any of the other cases pending against him, he still would be able to retain his private counsel, allowing him to protect his own interests if they diverge from those of the government.

While Trump was president, the Justice Department argued in the Carroll case that federal law gave him a “broad grant of immunity” against her lawsuit, adding that he was protected because he spoke about her in his role as president. A federal district court rejected that position in October, and the department filed an appeal in the waning days of Trump’s presidency. If the Justice Department wins on appeal, that would effectively end Carroll’s case against Trump.

Carroll’s lawyer, Roberta A. Kaplan, said it was “shocking” that the department would maintain the same argument under U.S. Attorney General Merrick Garland, who was appointed by Biden after the appeal was filed.

In testimony before Congress, Garland defended the position by saying the department had a duty to follow the law rather than to protect any administration. “Sometimes it means we have to make a decision about the law that we never would have made and that we strongly disagree with as a matter of policy,” he said.

The Justice Department’s appeal in the Carroll case is pending before the 2nd U.S. Circuit Court of Appeals. The outcome could have implications for at least four other federal lawsuits pending against Trump. Three of them seek to hold Trump liable for remarks in a speech on Jan. 6 shortly before the Capitol riots. They include the case filed by injured Capitol Police officers, as well as the cases filed by Representative Swalwell and U.S. Representative Bennie Thompson, a Mississippi Democrat. Thompson alleges that Trump violated federal law by inciting his supporters to block Congress from executing its official duties.

The fourth case was filed by the Michigan Welfare Rights Organization, an advocacy group for low-income people. The lawsuit claims Trump disenfranchised Black voters by trying overturn the results in Detroit, a majority Black city, after the 2020 election.

Andonian, the lawyer in Congressman Swalwell’s suit against Trump, said he fully expects that Trump’s lawyers now will adopt the Justice Department’s reasoning to argue that the former president was speaking on “matters of public concern” in his Jan. 6 speech. Trump that day continued his false claims that the election had been stolen from him through voter fraud; assailed Vice President Mike Pence for refusing to stop Congress from certifying Biden’s win; and called for his supporters to march to the Capitol.

Andonian and other attorneys argue there’s a legal distinction between Trump’s attacks on Carroll and his incendiary speeches seeking to reverse his election loss.

Ben Berwick, a lawyer representing the Capitol police officers, said that Trump’s appearance at the Jan. 6 gathering just before the Capitol insurrection amounted to a “campaign rally” unrelated to his official duties. That’s a different setting, he said, than the presidential news conference where Trump made the statements about Carroll.

“He is effectively acting as a candidate,” Berwick said. “He has no official role in the certification of electoral votes.”

Joseph Sellers, an attorney representing Congressman Thompson in his suit against Trump, concurred that Trump had stepped well beyond the cover of presidential immunity.

“I don’t think anyone would think it’s within the scope of the president’s legitimate duties to encourage people to interfere with the functioning of another branch of government,” Sellers said. “He was promoting an insurrection and a riot.