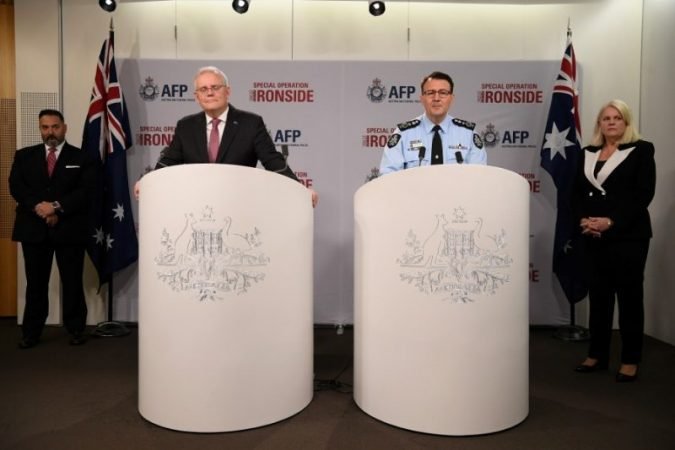 The compromised “AN0M” devices reached suspected criminals in 90 countries, who unwittingly blind copied — or ‘BBCed’– police on around 20 million messages.

The evidence prompted hundreds of arrests and foiled several large-scale drugs shipments, according to officials from several countries and unsealed US court documents.

In Australia alone, more than 200 people have been charged as part of the operation, which Prime Minister Scott Morrison said Tuesday had “struck a heavy blow against organised crime — not just in this country, but one that will echo around organised crime around the world”.

The operation began when the FBI infiltrated a similar encrypted system called “Phantom Secure” and dismantled another called “Sky Global.”

To fill the void, “the FBI operated its own encrypted device company, called ‘AN0M’,” the New Zealand police added.

According to unsealed court documents cited by US media outlet Vice, the FBI worked with insiders to develop and distribute AN0M devices through the Phantom Secure network of existing criminal customers, unloading 50 — mostly to Australia — as a “beta test.”

The devices are said to have had no email, call or GPS services and could only message other AN0M phones.

They could only be bought on the black market — for around $2,000 — and required a code from an existing user to access.

“Criminals needed to know a criminal to get a device,” the Australian Federal Police said in a statement.

Australian agencies helped get the phones in the hands of underworld “influencers” — including an Australian fugitive drug boss on the run in Turkey — in a bid to gain trust.

“The devices organically circulated and grew in popularity among criminals, who were confident of the legitimacy of the app because high-profile organised crime figures vouched for its integrity,” Australian police said.

Eventually 11,800 devices were distributed across every continent except Antarctica, with most devices being used in Australia, Spain, Germany and the Netherlands.

The cover appeared to be blown in March 2021 when a blogger detailed AN0M security flaws and claimed it was a scam linked to Australia, the United States and other members of the FiveEyes intelligence sharing network. The post was later deleted.

The Australian Federal Police said that as a result of the operation, a total of 224 people were now facing more than 500 charges in Australia alone, while six underground drug labs were shut down and firearms and Aus$45 million (US$35 million) in cash was seized.

“We allege they’ve been trafficking illicit drugs into Australia at an industrial scale.”

New Zealand Police said it was the “world’s most sophisticated law enforcement action against organised crime to date”.

Detective superintendent Greg Williams said 35 people had been arrested across the country on 900 “serious drug dealing, money laundering and other conspiracy-type charges” and were due to appear in court Tuesday.

Police in New Zealand seized methamphetamine, firearms, and millions of dollars in cash and assets during the operation.

“Warrants are coming in and we expect a number of other arrests to be undertaken,” Williams told reporters in Auckland.

More arrests were also expected to be announced around the world, Australian police said.

AN0M’s website — which once offered “military grade” encryption services and devices with special features like “light and dark” display themes — was unavailable Tuesday, with a message from authorities that the “domain has been seized.”