Biden’s Use of the G-Word Furthers Turkey’s Isolation 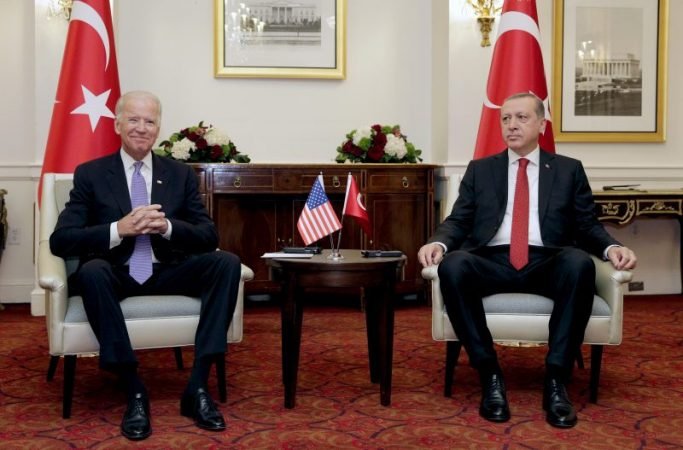 EXECUTIVE SUMMARY: President Joe Biden’s use of the word “genocide” on Armenian Remembrance Day was not a game-changer in US-Turkish relations, which are plagued by more fundamental problems. But it enhances Turkey’s political isolation, weakens its arguments on whether a genocide did or did not occur in 1915-24, and further destabilizes whatever is left of Ankara’s soft power.

The American presidential tradition of commemorating the beginning of the forced exile of millions of Ottoman Armenians occurs on April 24, and it customarily tests the strength of the US-Turkish alliance. The commemoration always sends Washington aides scurrying for a miracle word the president can use to refer to the event—one that acknowledges the scope of the tragedy while not offending America’s Turkish ally.

Diplomacy is largely about linguistic creativity. Former president Barack Obama wisely opted for the phrase “Meds Yeghern”—”Great Calamity” in Armenian—in his commemoration message rather than “genocide”. President Biden, however, went ahead and used the word “genocide”: “The American people honor all those Armenians who perished in the genocide that began 106 years ago today,” he said on Armenian Remembrance Day.

Turkish paranoia on this issue has a pragmatic explanation. “The recognition of genocide by a US president would make it an executive order and the legal basis for [thousands of] court claims and rulings against Turkey by US citizens of Armenian origin,” said Şükrü Elekdağ, a former Turkish ambassador to Washington.

Diplomats and scholars of international law are divided, however, on whether an executive order or US court verdicts could be enforced. “A US court can rule for compensation in favor of an American citizen of Armenian origin. But the heart of the matter is if that court ruling could be enforced,” said one Turkish diplomat. “For enforcement, the legal basis should be an international court, not [the] US. And then, which court? Who will decide if its rulings can or cannot be legally challenged, and through which judicial means? Will Turkey sign up to accept a ruling from an international court? There are too many question marks.”

Part of the problem is Turkey’s mismanagement of the historical dispute. Ankara’s defense lines on the genocide issue have been weak, unconvincing, and often self-destructive. A typically outraged Turkish response to genocide accusations from the Western world is “You, with your ugly history, cannot judge us.”

In reaction to Biden’s use of the g-word, Numan Kurtulmus, a top official from President Recep Tayyip Erdoğan’s ruling party, said: “We will remind those who slander Turkey of the blood spilled in Vietnam, Baghdad, Falluja, the Abu-Ghraib prison; [and] of the generations they terminated in Hiroshima and Nagasaki.” Turks miss the point that this argument sends two messages: first, that we are indeed guilty but you have no business judging us; and second, that you apologized for your historical sins but we are not yet mature enough to do so.

Turkey has used the Armenian genocide issue as a weapon in its neo-Ottoman, self-aggrandizing patterns of behavior. In 2001, before the French legislature recognized the genocide, Turkey threatened to freeze all economic, political, and military ties, including defense contracts. France went ahead and recognized the Armenian genocide anyway—and Turkey’s bilateral trade with France rose from $4 billion in 2001 to $15 billion a decade later.

Despite the value of the economic relationship, Ankara decided to threaten Paris once again. This time, all economic, political, and military ties would be frozen if the French legislature criminalized denial of Armenian genocide. FM Ahmet Davutoğlu said the French bill, if passed, would “dishonor our country and nation.” The French legislature passed the genocide denial bill—but a few months later, the French Supreme Court overturned it.

In June 2012, Ankara cheerfully announced that Turkey and France could now live happily ever after. Thus, between 2001 and 2012, Turkey moved from threatening countries whose legislatures could recognize the genocide to living peacefully with such countries as long as their denial laws do not take effect.

Finally there is the Russian case. As of 2021, the governments and parliaments of 32 countries, including the US, Germany, France, Italy, Canada, Brazil, and Russia, have formally recognized the Armenian Genocide. The Western countries on the list are Turkey’s biggest trading partners. Russia, too, is Turkey’s biggest natural gas supplier and, according to Ankara, its “strategic partner.”

Russia acknowledged the Armenian Genocide in 1995, but in the years since, Turkey has become Moscow’s closest NATO member ally. In 2019, Turkey acquired Russian-made S-400 surface-to-air missiles, becoming the first NATO member state to deploy a Russian air defense architecture. The threat that “you will lose Turkey if you recognize the Armenian genocide” is obviously a fairy tale. With the US, too, it will be business as usual soon.

Turkey’s pro-Kurdish HDP, or People’s Democracy Party, has called on Turkey to admit genocide, which it claims was the beginning of the “de-Christianization of Turkey” in the 20th century—a concept that “is a big lie,” according to Islamist columnist Ali Karahasanoğlu in the daily Yeni Akit. But is it?

In 1906, there were 2.8 million Ottoman Greeks in Turkey, making up 13.5% of the total population. Today, there are about 2,000 Greeks left out of a citizenship of 83 million. According to the American Embassy in Istanbul, the Armenian population was 2.4 million in 1886, which puts the Christian population during the final years of the Ottoman Empire at anywhere between 25% to 30%. Today, Islamists boast that 95-99% of Turkey is Muslim, with only around 100,000 Christians, or 0.12% of entire population.

Biden’s use of the g-word will not be a game-changer in US-Turkish relations, which are troubled by more fundamental problems. But his choice of language might invite other nations to follow suit. That won’t be a tectonic shift in world politics either. It won’t much matter—other than adding to the Turkish Foreign Affairs’ routine work—whether 32 or 52 countries recognize the Armenian Genocide.

But Biden’s word choice will enhance Turkey’s political isolation in international politics, weaken its arguments over whether or not a genocide occurred in 1915-1924, and further destabilize whatever is left of Ankara’s soft power.