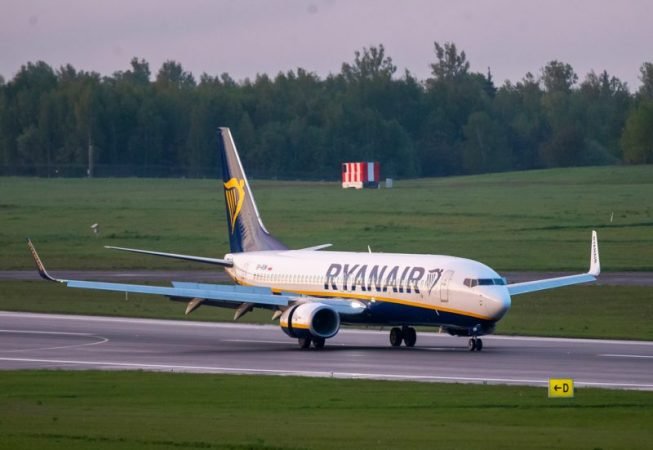 EU leaders cut Europe’s air links with Belarus on Monday, as strongman Alexander Lukashenko’s regime paraded a dissident journalist arrested after his flight was forced to land in Minsk.

European leaders meeting in Brussels called for the release of the pair and hit back at Minsk by agreeing to ban Belarusian airlines from the bloc and urging EU-based carriers not to fly over its airspace.

The leaders also warned they would adopt further “targeted economic sanctions” against the Belarusian authorities to add to the 88 regime figures and seven companies already on a blacklist over a crackdown on opposition.

The move came as Belarusian state television broadcast a 30-second video of Protasevich, who had been living between Lithuania and Poland, confirming that he was in prison in Minsk and “confessing” to charges of organising mass unrest.

The footage showed Protasevich — who could face 15 years in jail — with dark markings visible on his forehead, saying he was being treated “according to the law”.

US President Joe Biden slammed the forced diversion of the plane and arrest of Protasevich as “a direct affront to international norms” and said the video appeared to have been made “under duress”.

“I welcome the news that the European Union has called for targeted economic sanctions and other measures, and have asked my team to develop appropriate options to hold accountable those responsible,” Biden said, in a White House statement.

The forced landing of an airliner flying between EU nations has refocused attention on the festering political crisis in Belarus, where Lukashenko has unleashed waves of brutal repression to cling to power.

Western leaders accused Belarusian authorities of essentially hijacking a European plane, while Minsk claimed it had reacted to secure the flight after receiving a bomb threat.

“We will not tolerate any attempt to play Russian roulette with the lives of innocent civilians,” EU chief Charles Michel said.

The EU’s push to punish Minsk followed announcements from some nations and airlines that they were cutting links to Belarus.

Ukraine said it would halt direct flights between the two countries and over Belarus, while Scandinavian airline SAS, Germany’s Lufthansa and Latvia-based regional airline Air Baltic said they would be avoiding Belarusian airspace.

Belarus has insisted it acted legally over the grounding of the Ryanair jet, accusing the West of making “unfounded accusations” for political reasons.

Its air force chief said the plane’s captain had decided to land in Belarus “without outside interference” and that the pilot could have chosen to go to Ukraine or Poland.

A senior Belarusian transport official said the authorities received a letter claiming to be from the Palestinian Islamist group Hamas threatening to blow up the plane over Vilnius unless the EU renounced support for Israel.

The ICAO, a UN agency, is to meet on Thursday.

NATO slammed a “serious and dangerous incident” and said envoys from the military alliance were to discuss it on Tuesday.

The EU and other Western countries have already imposed a wide range of sanctions on Lukashenko’s government over its crackdown on opposition demonstrations that followed his disputed re-election to a sixth term last August.

But Lukashenko has remained defiant with help from his main backer Russia.

Britain’s Foreign Secretary Dominic Raab raised the possibility of that Russia had backed the operation.

“It’s very difficult to believe that this kind of action could have been taken without at least the acquiescence of the authorities in Moscow,” he told parliament.

But Russia has dismissed the outrage in the West.

“We are shocked that the West calls the incident in Belarusian air space ‘shocking,'” Zakharova said on Facebook, accusing Western nations of “kidnappings, forced landings and illegal arrests”.

Together with co-founder Stepan Putilo, Protasevich until recently ran the Nexta channel on messaging app Telegram, which helped organise the protests that were the biggest challenge to Lukashenko’s 26-year rule.

With close to two million subscribers on the service, Nexta Live and its sister channel Nexta are prominent opposition channels and helped mobilise protesters in Belarus.

Protasevich and Putilo were added to Belarus’s list of “individuals involved in terrorist activity” last year.

The spiralling tensions around Belarus were in evidence as Minsk expelled the entire staff of Latvia’s embassy, including the ambassador, after accusing Latvian authorities of having used an opposition flag at an ice hockey championship.