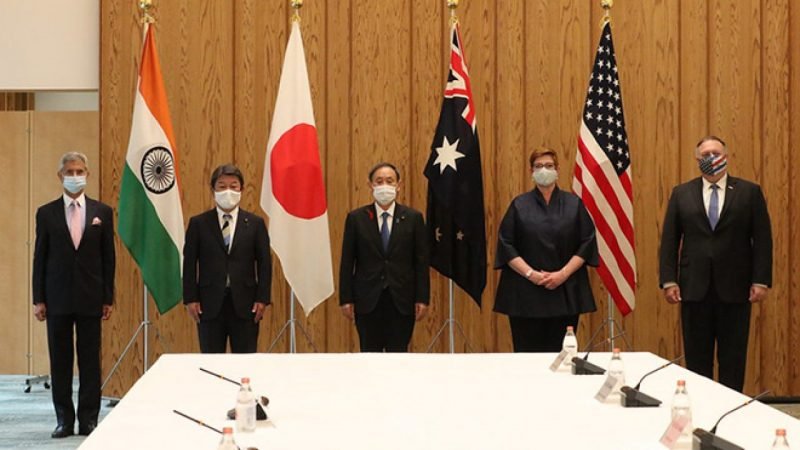 QUAD (Quadrilateral security dialogue) officially enters New Delhi’s vocabulary in the press release by the Ministry of External Affairs, after the 3rd virtual ministerial-level meeting on 18 February 2021, between the USA, Japan, Australia and India.

Indian Minister of External Affairs S. Jaishankar welcomed his foreign counterparts from Australia, Japan and the USA. The meeting centred around devising various methods to ensure a “Free and open Indo Pacific region”, combat with COVID-19 pandemic, underscore rule of law and rule-based International along with strengthening strategic relationships. According to the Indian Ministry of External Affairs, “The Ministers emphasized their commitment to upholding a rules-based international order, underpinned by respect for territorial integrity and sovereignty, rule of law, transparency, freedom of navigation in the international seas and peaceful resolution of disputes.”

The dignitaries hailed their unique ties of political democracies, market economy and pluralistic society. They mentioned their optimism regarding the rapid change in world politics which must be positive and inclusive. The Ministers reaffirmed their commitment to further their cooperation to combat the COVID-19 pandemic and ensure easy access of vaccines to the world where India’s robust vaccination drive was recognised and appreciated. The USA, which participated for the first time under President Joe Biden Administration, considers India as its “critical partner” when it comes to mettle out the challenges in the Indo-Pacific region. The Biden Administration has unleashed its full support to strengthen the ties and outcompete China. America’s National security advisor Jake Sullivan calling it “a foundation upon which to build substantial American policy in the Indo-Pacific”.

Last week the American President Joe Biden had a telephonic exchange with PM Modi where both the leaders reiterated the need for a free and open Indo-Pacific region, including support for freedom of navigation, territorial integrity and stronger regional architecture. The ministers brainstormed on climate change and furthering cooperation in areas such as maritime security, HADR, supply chain resilience and counter-terrorism.

What is Quadrilateral security dialogue?

QUAD is a colloquial term used to define the informal strategic relationships between the USA, Japan, India and Australia. QUAD was formed with the initiative of former Japanese PM Shino Abe in 2007. However, due to a lack of institutional framework and negligence, it remained sluggish for a few years. But the expansionist moves of China injected new life in the alliance and vivified the aim of the “Free, open and prosperous Indo Pacific region“. In November 2017 India, the USA, Japan and Australia forged a new strategy to keep the critical sea routes in the Indo-Pacific region free of any influence. In November 2020, the QUAD successfully conducted a Malabar Naval drill in the Indian Ocean region. Realising the potential challenge from QUAD, Dragon connotes it as the Asian version of NATO.

QUAD: A challenge to Dragon’s Hegemony?

The 21st century has altered the balance of power in world politics with America’s hegemony dwindling and shifting towards Asian giant i.e. China. The rise of the military and economic strength of the dragon has inflicted massive aggression and dominance in the Indo- Pacific region. Beijing has been consistently flexing its arm in the South China sea and is more interested to dominate the Malacca strait (the world’s most engaged and congested waterways) which is the most crucial linking point of the South China Sea to the Indian Ocean. Considering the strategic and commercial importance of the Malacca strait, Beijing has made strong attempts to swoop the area.

Reacting to the anarchist behaviour in the Indo Pacific region the democratic Quad countries have united themselves to nullify the Chinese encroachment and despotism in the region. It is evident that China remained complacent that Washington’s engagement with Russia, Iran, Afghanistan will keep it engaged and diverted, hence would not allow America to sail in the Indian ocean. But the November Malabar Naval drill blew the senses of China, since then fears are mongering and suspicions are mounting over QUAD’s possible harm to Beijing.

In the present scenario when the international community has criticised China for the outbreak of Covid-19 and its giant appetite for territory usurpation, this QUAD meeting decodes a unified call to mettle out the malady of threat and instability from the region. All the countries must fulfil their commitment in letter and spirit for a free and open Indo-Pacific region, maritime security, rule-based International order which would ensure peace and prosperity for all rather than of any one nation.