Halt in the Horn again: Riparian nations again in conflict due to GERD project 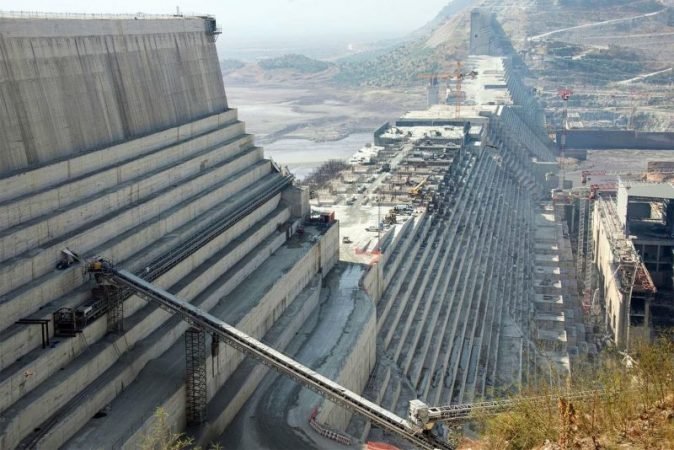 The Blue Nile controversy among the major players of Africa is in a dire need to get concluded. Having the immense potential to resolve the poverty issues and enhance regional cooperation in the subcontinent the Grand Ethiopian Renaissance Dam (GERD) has now been in a decade long conflict mainly between Sudan, Ethiopia and Egypt. Being distantly observed for years it now is getting attention from the international community as the fear of military involvement looms. Assisting with the legal and technical issues United Nations, African Union and the United States are expected by the world community to broker a deal among the riparian states of the horn.

The GERD project was initiated unilaterally by Ethiopia in 2011 on the Blue Nile tributary. Given the strategic location, the Dam stands on the eastern border of Sudan with Egypt lying in the south. Expected to be completed in 2015 the project is still in progress as the negotiations among the riparian states did not reach any solid agreement due to conflict of interests. The main issue being water sharing, Egypt and Sudan fear the downstream water flow of the river will be affected due to filling of the Dam upstream in the Blue Nile. Apart from this, the Grand Ethiopian Renaissance Dam project is also crucial for the remaining of 11 riparian states— Tanzania, Uganda, the Democratic Republic of Congo, Rwanda, Burundi, Kenya, Eritrea, and South Sudan.

Apart from the river water sharing issue, the giant project will provide 6,000 megawatts of energy sufficing the food and electricity needs of Ethiopia which places the long-dominant position of Egypt on the Nile river insecure. Being the largest hydropower plant of Africa the project will dramatically place Ethiopia as a leading player of African regional politics. It will also gain a remarkable significance in the global context. With Egypt being in a vulnerable position as it is heavily dependent upon the river water and its resources it is also concerned by the altering of status quo brought in by the GERD project.

The growing needs of rising population along with the problems of climate change which the subcontinent is facing has made Nile river water sharing a main issue of contention. Among the Nile Basin Initiative countries (NBI), for now, only Sudan and Egypt are uncomfortable with the project. Others have also ratified the Cooperative Framework Agreement which has mainly the upstream states as signatories pledging for greater and efficient utilization of Nile river basin.

Although Ethiopia has intended for exporting electricity to neighbouring states and to strengthen regional cooperation, Cairo does not seem to be satisfied with the promises and alteration in the balance of power foreseen. Where Khartoum is worried about its resource deficiency and future calamities due to the dam filling, Cairo has multiple reasons for its uneasy position as discussed. With now calling for international intervention in United Nations Security Council and the USA, Egypt has shown concerns for the future regarding changing climatic situations as well as the pressure on the basin expected with riparian states fighting for more stakes. It has also called out Ethiopia for not having regard for old treaties and agreements and infringing on the rights of the nation having with respect of  Blue Nile.

Due to political instability in the region, a mutual agreement has not been reached even after a decade long negotiations. The 2015 Declaration of Principles (DoP) also known as Khartoum document was expected to be providing principles for solving the legal and technical glitches for a tripartite agreement. However the strong Ethiopian stance of building an agreement based on the contemporary international law, breaking the old norms set for the usage of the Nile river or setting the “new legal order” is unwelcomed by Egypt.  (Salman, 2016) It is insisting to stick to the “natural historical rights” it  says to have gained through earlier treaties (1929 Anglo Egyptian treaty and 1959 agreement between Sudan and Egypt)

With the financing of the project by Ethiopia, its stiff position on technical details are seen. Recently initiation of dam filling was seen through satellites which has made Sudan and Egypt upset as no agreement have been reached. It has thus also been observed that the remaining of riparian states, having future in the project, also have not been given a much say in the issue.

Since these major development has followed, either technical or legal issues have been erupting delaying the agreement. The efforts of the Tripartite National Committee discussing the joint offer proposed by French firms BRL and Artelia also fell into vain

The African Union (AU) is said to be the most potential mediator in the GERD issue. However, it has maintained a long silence on the matter. After the attention the matter has got due to direct threats of military involvement by the stakeholders, the Peace and Security Council has shown interest in resolving the transboundary water dispute. It urged the three parties for a conflict resolution mechanism through virtual Bureau of Assembly summit also inviting the United States of America as an observer to broker the deal. This has unlikely politicized the matter for AU as earlier the proposal from Russia to reach to a deal but the parties relied on US (particularly Egypt) and World Bank for mediation.

It is maintaining its uncontroversial and neutral stance in order to preserve peace and security in the region with its mantra of “African solution to Africa’s problems. Providing technical assistance to the tripartite issue, AU lacks the institutional mechanism for creating a solid Water Management Resolution for Nile river aspired by the riparian states for the future projects in the  Blue Nile basin.

With the nasty politics of Africa placed under global eye and the tripartite nations playing the blame game among each other many parties have tried to mediate and broker a deal. The role of AU and the United Nations expected to be the most important ones, the USA has also intervened along with Russia whereas China is being a leading financer for the Grand Ethiopian Renaissance Dam. The issue being a prominent one in the current geopolitics. The USA under President Trump’s regime tried to broker a deal however Ethiopia did not show any interest as the U.S clearly was on the Egyptian side, as was asked to meddle by Egypt only.

Egypt also took the issue to the UN Security Council trying to put pressure on Khartoum for more concessions in the deal. Playing the sympathy card it has given the reason of its major dependence on the river for international attention. While giving the reason that the African nations lack the political will to reach to a mutually accepted agreement UN hinted that a nudge must be provided by regional organizations in the matter facilitating the desire among the nations to keep inclusive growth and sustainable regional development as primary goals. It also affirmed in extending its assistance to the regions once the political fuss is done away with.

The proposal by Egypt to include World Bank as an impartial third party to resolve the technical issues in the matter was also rejected by Ethiopia. Ethiopia and Egypt thus raised the GRED issue in the 74th UNGA’s session with Egypt even calling the GRED a matter of “life and existence” for it. Here the UN Watercourses Convention can happen to provide with a healthy alternative for technical issues.

The current scenario and future prospects

South Africa has taken a lead in recent round of talks being the head of African Union with other international parties watching the developments, such as European Union and UNSC. Even after being offered technical assistance from several other countries experts, no one deal was mutually accepted and the matter is still halted to the dam filling issue raised by Egypt and Sudan. Sudan even boycotted the recent round of for two reasons that is, the technical issues of dam filling and the dragging of the matter by Egypt.

Scholars who have attempted to holistically analyze the GRED issue have suggested the involvement of Intergovernmental Authority on Development (IGAD) as it is based on contemporary international laws  for rivers and aquifers. The international body is different from regional cooperatives like CFA as it is based on the recent international protocols for global and mutual partnerships however it does take into regard the regional customs and conventions while functioning. (Salman,  Yihdego and Rieu-Clarke) Ethiopia and Sudan along with other CFA signatories are members of IGAD whereas Egypt is not.

This suggests the immense potential of the Grand Ethiopian Renaissance Dam providing opportunities for giving a breakthrough to hydro-political relations of Nile (Salman). However for this to happen countries have to gradually giveaway their conventional status quo and focus more on sustainable development and resource management on the global and regional level which can be handled well by Africa Union and ratification of CFA by more countries on the regional level and UN  Watercourses Convention on a global level. Processes UN Economic Commission for Europe’s Convention on the Protection and Use of Transboundary Watercourses and International Lakes can be looked upto. The Nile Basin Initiative which has all the riparian states as members can also provide with ta solid legal framework other major regional bodies are failing to do. The NBI-CoM (council of minister) can provide with the political agreements being the highest decision making body, this will be more holistic particularly for the riparian countries interests underlining provisions for matters like poverty, efficient water utilization, transboundary water issues, climate change etc.

Along with sharing the sensitive information and agreeing upon regarding the energy sharing, trade and investment practices, utilization of water resources among the basin countries scholars have also pointed out on the relevance of  transparency and inclusiveness of various groups in the matter for an all round mutual benefit through the project. This if considered in the ongoing round of talks can provide the trilateral agreements with range of alternatives as well as agreed upon terms for the DoP.

Thus main issue being technical disagreements and power sharing in the region there is an urgent need of a basin wide cooperation. More research of the Nile basin, its future prospects and resource exploitation can also be not overlooked. The AU led technical negotiations are currently proving help with this regard. All the riparian nations now must strive to gain all the benefits from the GRED project. Priority given to problems of poverty, illiteracy , scarcity of resources in the region and now with the growing climate change is to be looked as a matter of collective responsibility for all the African nations. Thinking in this direction may also ensure to keep the peace and security crucial in diplomatic relations and keeping military threats away.

While many suggest abandoning of the  Egypt’s natural historical rights (1929 Anglo Egyptian treaty and 1959 agreement between Sudan and Egypt) the keeping of the domestic and regional conventional as well as modern rights and responsibilities intact, there is also a need for considering the international protocols being developed for deadlock situations like these. The instruments or modern international diplomacy provide with a range of solutions. Relying upon the dispute resolution mechanisms on lines of modern international protocols sensitive to regional dialogue exchange and conventions is the need of the hour. The regular participation and rigorous interaction among the diplomats who keep the needs of people and the civil society with that of national interest altogether balanced can provide to resolve the conflict.

Khatija Bano is a Former Research Intern at The Kootneeti